When Amtrak took over intercity passenger rail service on May 1, 1971, it inherited a collection of rolling stock from twenty different railroads, each with its own distinct colors and logos. Needing only to operate 184 of the 366 trains that had been run nationwide by the private railroads, Amtrak was able to pick the 1,200 best passenger cars to lease from the 3,000 that the private railroads had owned. This equipment was haphazardly mixed to form consists, resulting in trains with the mismatched colors of several predecessor railroads. This "Rainbow Era" was short-lived; Amtrak began purchasing some of the leased equipment in mid-1971, setting the stage for wholesale repainting from 1972 to 1974. 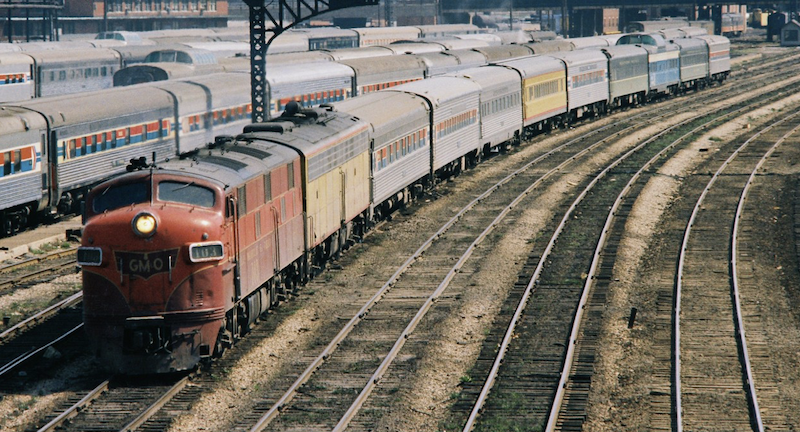 Introduced in 1972, Phase I was the first paint scheme to be implemented system-wide on Amtrak's trains. Except for a small number of locomotives that had been painted into experimental and promotional paint schemes, it was the first new paint for most equipment under Amtrak. The scheme was part of Amtrak's larger move to a visual identity featuring the national colors of red, white, and blue.

Locomotives were painted a light gray ("Platinum Mist") with a black roof, the Amtrak "Pointless Arrow" chevron logo on the side, and a red nose (which led to a "Bloody Nose" nickname). Passenger cars were silver (or left bare stainless steel), with a red and bright blue stripe (bracketed by thin white stripes) at window level and the chevron logo at one or both ends. A number of variants were made for non-revenue locomotives, GG1 locomotives, Turbotrain and Turboliner trainsets, and self-propelled RDC and Metroliner railcars.

The Phase II paint scheme was introduced in late 1974 with the arrival of the new GE E60 locomotives. The red nose and chevron logo on locomotives were replaced with stripes similar to passenger cars. Most passenger cars were essentially unchanged from Phase I, except for the removal of the chevron logo; new Sightseer lounges had a higher stripe with an angled transition on each end.

Phase III, introduced in 1976, is still used on some equipment. On both passenger cars and locomotives, the outer white pinstripes were removed while the inner stripe was widened, resulting in red, white, and blue stripes of equal width. Turboliners and the LRC test train were painted in white, with the stripes at the bottom of the train. This scheme was introduced "for safety, graphic aid and saving money", as the white band was highly reflective and provided a place for car information, and the standard widths made better use of raw material.

Several types of locomotives that were acquired later were given variations on Phase III. AEM-7 locomotives had the blue stripe expanded to cover the entire lower part of the body. On Dash 8-32BWH locomotives, a deeper blue and red was used; the stripes had additional pinstripes and angled upward across the middle of the body. The similarity to the Pepsi logo led to the units being nicknamed "Pepsi Cans". Genesis locomotives had a lighter roof and narrower white stripe; the stripes angled downward on the sloped nose, and faded towards the rear. That variant was created by industrial designer Cesar Vergara, who also designed the angular bodies of the locomotives.

In October 2013, Amtrak introduced a new variant of Phase III with the production of the new Viewliner II cars, the first of which entered service in 2015. The Viewliner cars have some changes from previous Phase III passenger cars, including a red reflective stripe at the bottom and a newer ("Travelmark") logo. In January 2016, Amtrak revealed a P32AC-DM that was repainted into Phase III, similar to that of the heritage units Nos. 145 and 822, but featuring modern logos and "Empire Service" emblems on the sides. All P32AC-DMs will eventually be repainted into this scheme, with costs shared between Amtrak and the state of New York.

Beginning in 1993, Phase IV was introduced as a striking departure from the traditional red, white, and blue style seen previously. Brought into service with the delivery of the newer Superliner II cars, Phase IV has two thin red stripes and a thick dark blue stripe. In 1997, Amtrak extended the scheme to locomotives, initially GE P42DC diesel locomotives on Northeast Corridor services.

Phase V was introduced with the arrival of the Acela Express high-speed train sets in 2000 and is used on most locomotives. Locomotives are painted light gray, with a blue stripe (darker than Phases I–III, but lighter than IV) at the top and a thin red reflective stripe at the bottom. The blue stripe has a wavy bottom on Genesis locomotives and a flat bottom on other locomotives and ex-F40PH non-powered control units (NPCUs). The Amtrak "Travelmark" logo is painted near the front or rear of the unit. SC-44 locomotives used on Midwest routes have a variant of Phase V with a blue front and a halftone transition into the grey side. Non-passenger cars like Auto Train autoracks are all-gray except for the logo and red stripe; Express Box Cars had blue stripes on top and bottom.

Acela Express trainsets have grey and stainless steel bodies with the lower red stripe, with the wavy blue roof and Acela logo on the power cars only. The Acela passenger cars have no blue stripe; colored blobs called "mobiles" are used to indicate the type of car (Business Class, Cafe Bistro, or First Class). When the Acela Express was introduced, regional trains on the Northeast Corridor were briefly designated Acela Regional. Amfleet coaches for these trains received "Capstone" livery, which had a window stripe with various patterns of blue, light blue, and green to indicate the type of service. Rebuilt Turboliners had a similar variant of the Capstone livery.

Phase VI, commonly referred to as Phase IVb, introduced in 2002, is used on most passenger cars. It retains the same stripe style as Phase IV: wide window stripes on single-level cars, and narrow stripes on Superliners. The red reflective sill stripe and mid-tone blue on Phase V are used. Single-level cars have white logos within the blue stripe, while Superliners have blue logos below the stripes.

Five state-funded corridor routes—the Cascades, Capitol Corridor, Pacific Surfliner, Piedmont, and San Joaquin—are operated by Amtrak using equipment that is largely owned by the states in which they operate, and painted in custom schemes that deviate from the national Amtrak livery. Several other route-specific paint schemes have been used in the past.