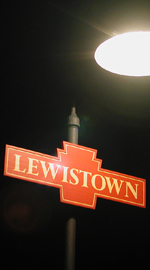 Fats Domino, Hank Williams, and Nat “King” Cole are topping the charts. The top movie is Cinderella from Disney, joined by All About Eve and John Ford’s Rio Grande featuring John Wayne.

The Pennsylvania Railroad has re-equipped its passenger trains and Walter S. Franklin is its president. The railroad has three regions and 19 divisions. Steam is still in use but dieselization is well under way.

Join us at the Lewistown, on the main line between Harrisburg and Altoona. It’s fall and the extra traffic on the highways is a tip off that Penn State has a home football game. Have a seat trackside and enjoy the sights and sounds of The Standard Railroad of the World!