It's been a very productive quarter on the Middle Division...

The greatest task at hand, which was largely underestimated, has been the installation of resistors on wheel sets to allow for detection. It's a multi-step process -- 1) removing two axles per car; 2) attaching the resistor with CA and allowing to dry; 3) painting both sides of the resistor with "wire paint" and allowing to dry overnight; 4) overcoating the wire paint with clear nail polish to harden and protect the connection; 5) reinstalling the wheelsets; and 6) testing each car.

Thus far I have installed resistors on approximately 150 freight cars and about 75 passenger cars. That's about half of the freight cars that are ready for service and many more resin kits awaiting assembly. There are about 50 more passenger cars to complete.

Once detection has been successfully tested, the rolling stock advances to the "assignment" stage. Only six freight trains have work at Lewistown; the rest are all through trains (as well as all passenger trains). The through trains are having cars permanently assigned to them. The remainder become part of an "interchange" pool that could be moved on or off the model railroad at any given time.

One impediment to operations is that I do not yet have enough "home road" boxcars detection-enabled. This will be my priority after the PRRT&HS annual meeting in May.

In addition to adding detection to most of my passenger cars, I finally applied car name/number decals to most of my Walthers cars. As part of a PRR-Pro project years ago, I had applied dozens of grabs onto 14 B60B baggage cars but had not numbered them. I'm pleased to say that they are now done, along with my BM70M baggage/mail cars, my D85C/D85D twin unit diners, and my INN, CREEK, RAPIDS, IMPERIAL and MOUNTAIN VIEW sleepers. 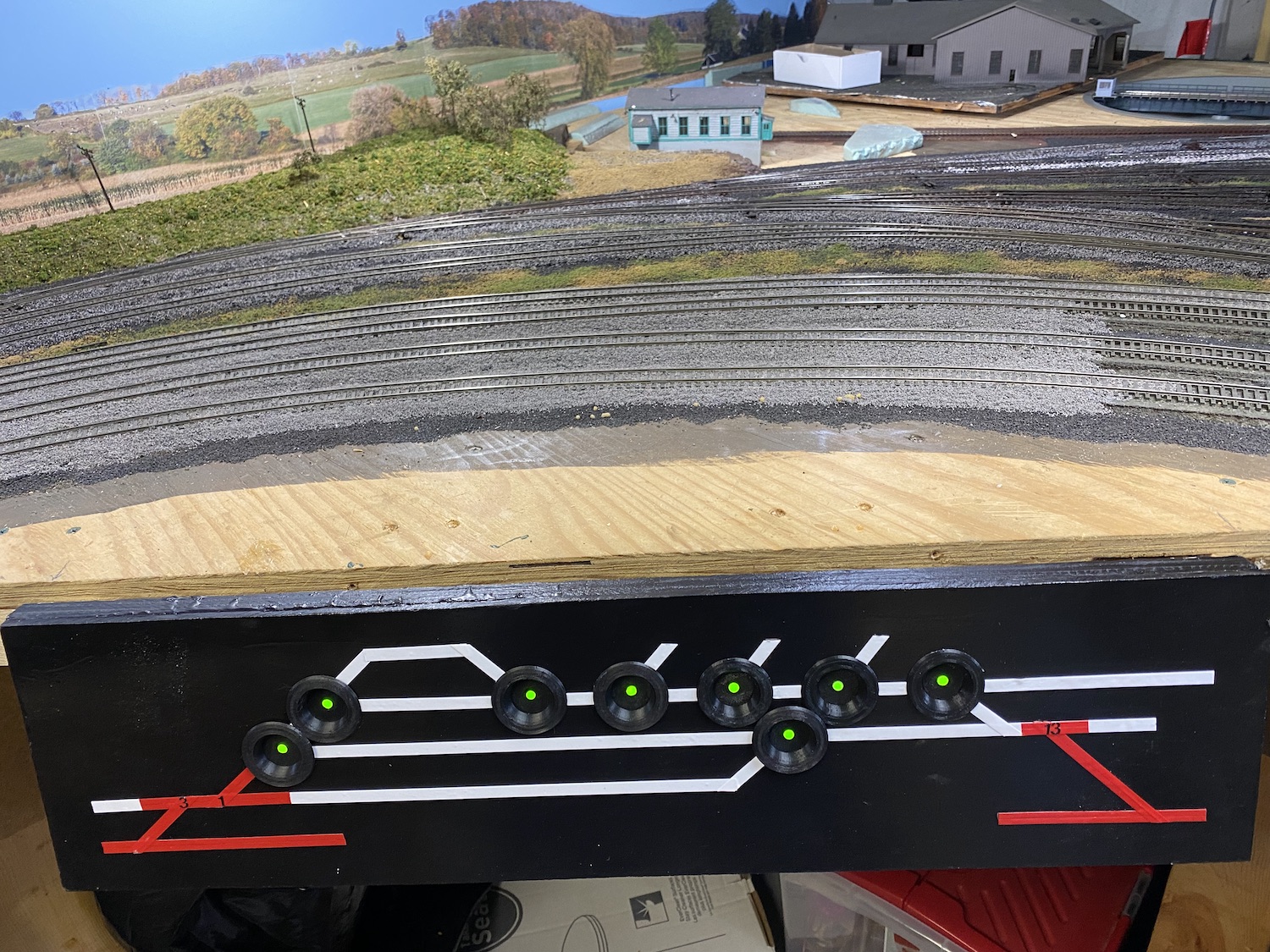 With the exception of the yard control panels, I have finished replacing the local panels from using Barrett Hill Touch Toggles to using their Cup Toggles. I've been holding off on the yard boards because they are coming out with a new Matrix Controller that mimics what a "diode matrix" did back in the day. It's still in beta and I would like to use it. Problem is, the holes in the control panels need to be placed at different locations for routes vs. turnouts. This is my other impediment to operations.

At right is the Roundhouse Road control panel, which controls switches at the "upper yard" along the main line. These switches are dual controlled from here and from the yard pit. The track indicated in red is under the control of the LEWIS tower operator.

While I may still have two hurdles before operations can begin, that hasn't stopped me from scheduling the following open houses and welcoming visitors: 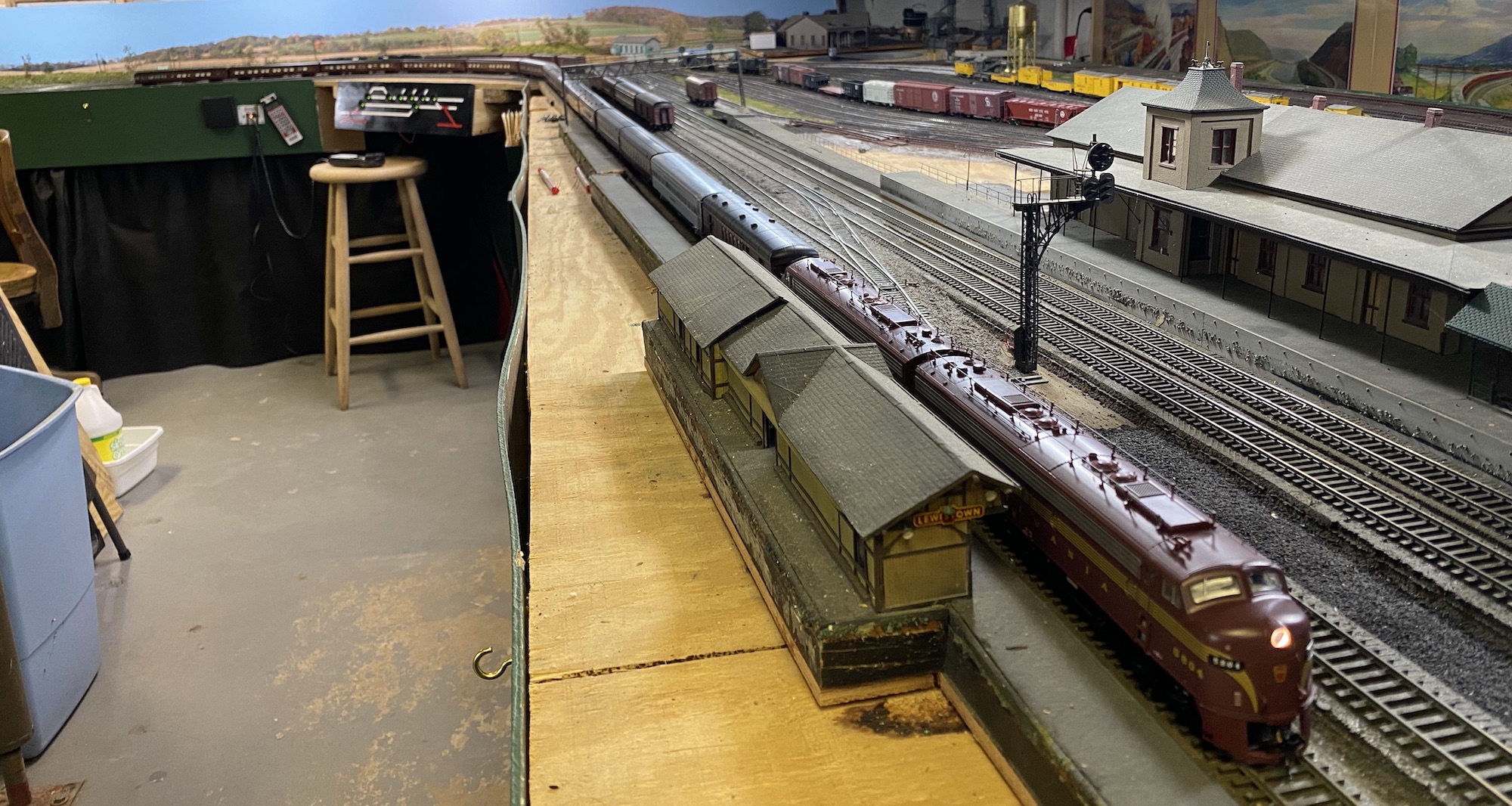 The Broadway Limited currently has 15 cars; a 16th, the HARBOR COVE, is on the workbench for interior detailing. An E7B unit may be added as the staging track appears to have the space.