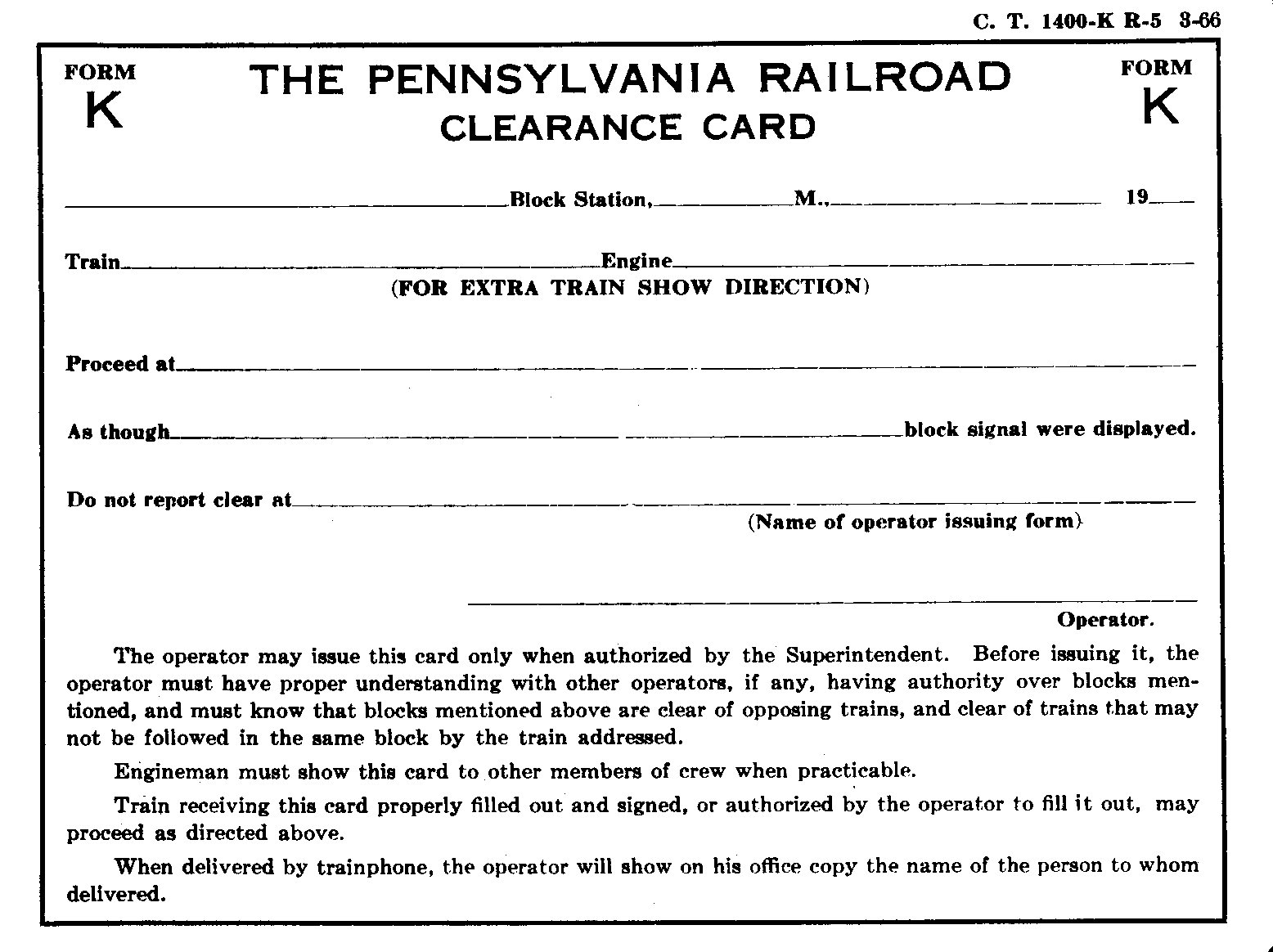 The signals at the entrance to each end of the block are not interconnected, either electrically or mechanically, and no track circuits are used. Therefore, the presence of trains in the block has no effect on the aspect of the signals.

The permissive system may be used to expedite traffic. However, following trains must obey strict speed requirements, looking out for trains ahead.

The PRR Book of Rules(a.k.a. Rules for Conducting Transportation), effective October 25, 1956 and in effect through the PC merger, contained 29 rules in the Manual Block Signal section (the 300 series of rules) and four rules in the Fixed Signals section that applied specifically to manual block operations. The four-fixed signal rules, illustrated below, were:

Other aspects; including Stop-signal, Restricting, Approach, Caution and Train-order were used in manual block territory but did not convey block authority. The PC Rules for Conducting Transportation pertaining to manual block operations were essentially the same as during the PRR era.

The signals at the entrance to a block are controlled from what is known as a Block Station, which in the early days were all manned by Signalmen, later called Block Operators initially using telegraph to communicate with the dispatcher and other block operators. In the early 1900s the PRR introduced the use of unattended block stations and later in 1941 block-limit stations as replacements for the manned block station. The events that precipitated the change to unattended block stations are the result of the perfection of the telephone and the need to reduce operating expenses. When the invention of the telephone (1876) became perfected and reliable enough for railroad train order use, ca. 1904, the need to have a person with telegraphy skills at every block station wasn't necessary. The PRR also found it necessary to reduce its operating expenses because of the impact of the implementation of the "full-crew" law in 1913 and the Adamson Act in 1916 that introduced the 8-hour/100-mile day with time and a half for certain kinds of overtime for the operating brotherhoods. At this time the railroad also found it necessary to make large capital expenditures to restore the physical plant and equipment, which had become deteriorated during the massive movement of trains during World War I. Also after the war, when the railroads were returned to private operation the PRR had a deficit in Net Railway Operating Income cause by a severe winter early in 1920, a switchmen's strike in April, a 21% wage increase in May and a discrepancy between freight rates and wages.

Trains were usually authorized to pass block stations on signal indication, in other words by the operator displaying an aspect other than Stop-Signal (Rule 292). In most cases that would be Clear-Block (Rule 280). However, when the block ahead was occupied by a freight train a following freight train could receive a Permissive-Block (Rule 289) aspect provided such operations were permitted in the territory. Passenger trains could only operate in a clear block.

Of course if the train were diverting to a non-signaled and/or non-circuited track such as going into the siding or a yard, a Restricting signal (Rule 290) would be displayed. If for some reason the block signal could not be cleared at a block station, authority to enter the block was given to the train by the block operator issuing a Form C - Clearance Card when authorized by the Superintendent-Transportation. 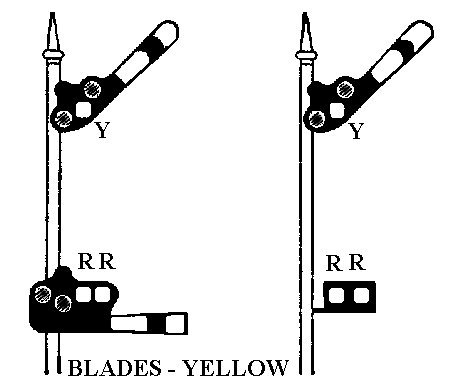 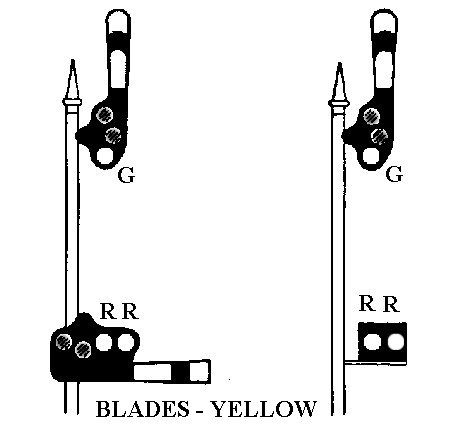 PRR semaphore fixed signals used to convey block authority in MBS territory. From the PRR Operating Department Rules For Conducting Transportation, April 26, 1925. At this time the block-limit signal had not been established as a rule but was in use, designated as a "sign" in the timetable special instructions to be used at unattended block stations. Position light signals were also in use at this time.

INDICATION
Limit of the block. (Yellow light next to track governed)

INDICATION
Proceed prepared to stop at next Block-limit signal. Train exceeding Medium speed must at once reduce to that speed. NOTE - Will not apply to trains authorized to pass the Block-limit as though Clear-block signal were displayed.

PRR position light fixed signals used to convey block authority in MBS territory. From the PRR Rules for Conducting Transportation, October 28, 1956. Note - between 1925 and 1956 Clear-block changed from Rule 287 to 280 and Permissive-block changed from Rule 280 to 289. For those interested in replicating these aspects using Penn Central color light signals - Permissive-block was yellow with an "MB" plate on the mast while Clear-block was green with an "MB" plate on the mast with or without rounded end semaphore blades. ABB 03/01