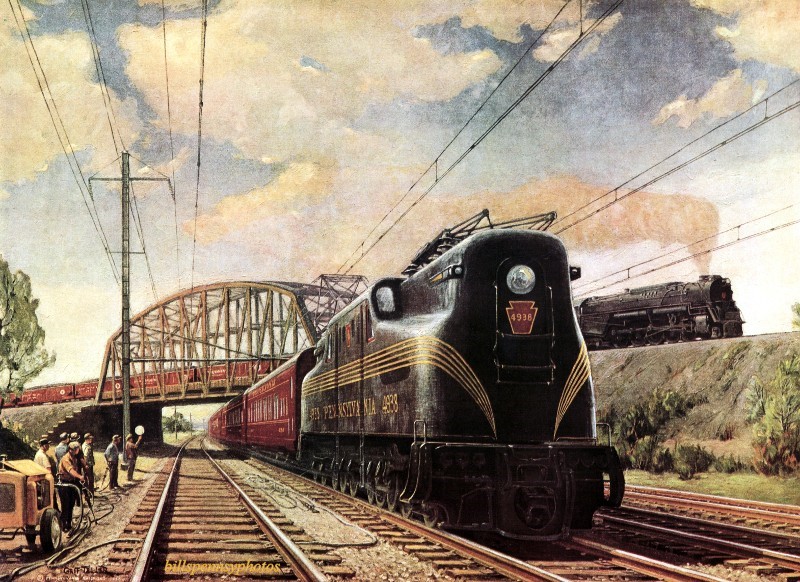 Whitford provides an interesting scene. The main line presents as an otherwise uneventful four-track line under catenary. The star of the show is a 373' truss bridge that carries the Philadelphia & Thorndale Branch (P&T) over the main line at an extreme angle. The scene was the subject of a Grif Teller calendar painting.

A few miles west the P&T would merge into the main line at THORN interlocking at Thorndale, Pa.

The following is an excerpt from the Library of Congress entry (HAER No. PA-522) on the Whitford bridge:

The Pennsylvania Railroad (PRR) made a number of improvements to freight operations in eastern Pennsylvania during the administration of President Alexander J. Cassatt (1899-1906). In addition to reducing grades on the Trenton Cut-Off around Philadelphia, Cassatt's ambitious construction plan of 1902 included two sections of low-grade freight tracks: the Philadelphia & Thorndale Branch parallel to its main line in Chester County, and the Atglen & Susquehanna Branch along a separate alignment in Lancaster County. Except for a ten-mile stretch of shared tracks through Coatesville, these improvements constituted a complete separation of freight and passenger traffic between Trenton and Harrisburg.

At Whitford, the Philadelphia & Thorndale Branch crosses over PRR's former four-track main line on an exceptionally long pin-connected Parker through truss. PRR bridge engineers completed plans for the two-track span in late 1904. Pennsylvania Steel Co. fabricated the structure, delivered parts from its Steelton plant in May 1905, and presumably completed erection that same year. The truss crosses the passenger tracks at an extreme skew, but is framed square on stone abutments, perhaps to simplify design and construction. The Parker truss has diagonals in tension and inclined end posts like the Pratt truss, but uses material more efficiently in a polygonally curved upper chord. The Whitford Bridge's Parker truss is 56'-0" deep at mid-span and measures 373'-l" from center to center of its end most pins. This exceeds the commonly accepted practical limit of 300'-0" for the Parker type.

The Whitford Bridge is not the only PRR structure to push the Parker truss envelope. It has a slightly longer sibling, a 387'-10" span at 52nd Street in Philadelphia, built earlier in PRR's passenger-freight separation campaign. The 52nd Street Bridge carries only one passenger track, however, and is of somewhat lighter construction. In describing the Whitford Bridge, Conrail Chief Engineer James T. Sullivan noted that "a good many designers would have transferred to Pennsylvania truss construction" for this span length. Because the Whitford Bridge's Parker truss has only eleven equal panels of 33'-11", its stringers must be exceptionally heavy 4'-7-l/2"- deep plate girders to carry loads between panel points. A Pennsylvania truss design would have been more efficient by providing a secondary system of diagonals to support intermediate floor beams.

A 1918 photograph of the Whitford Bridge shows two features, perhaps original, that protected the passenger tracks below. Steel plates about 8'-0" high were bolted to the trusses on either side, and longitudinal wooden planks were laid across the ties to form a solid floor. A few planks can still be found on the bridge, but no steel plates remain. The bridge has been out of service, with its tracks removed, since about 1990. The former PRR main line below presently carries Amtrak passenger trains between Philadelphia and Harrisburg, and has only two tracks installed.

While the full nature of this entity remains unknown, it is known that their siding terminated on a coal wharf.

On August 2, 1984, the station house was listed on the National Register of Historic Places.