All cars were built by the Pennsylvania Car Company.

All cars were painted Mineral Brown which includes sides, ends, roofs, doors, undercarriages and trucks. The exception is the doors on the double deck cars which are painted reefer yellow for easy identification.

The double deck cars were convertible to single deck cars by means of a winching mechanism on the side of the car which would lift the upper deck up to the inside of the roof to get it out of the way if the car was to be used to carry horses or cattle.

1940-1947: Straight line maps with "Santa Fe all the Way" on freight cars left side with passenger train slogans on right side: Super Chief, El Capitan, Chief, Grand Canyon, and Scout.

1943: Express boxcars lost their maps and slogans to be replaced by the word "EXPRESS" in 5" Roman.

1953-1955: SF Trail Transportation logo is now the circle cross in square with words spelled out.

1958: SF lettering in heralds changed to modern style (Cooper, which is more round and fatter).

1959: Introduction of large circle/cross herald with "Ship & Travel All the Way" on both sides.

1972: Mineral Red used on box cars instead of Mineral Brown.

Diesels used as switchers between 1935 and 1960 were painted black, with just a thin white or silver horizontal accent stripe (the sills were painted similarly). The letters "A.T.& S.F." were applied in a small font centered on the sides of the unit, as was the standard blue and white "Santa Fe" box logo.

All units wore a nose emblem consisting of an elongated yellow "Circle and Cross" emblem with integral "tabs" on the nose and the sides, outlined and accented with black pinstripes, with variances according to the locomotive model. "SANTA FE" was displayed on the horizontal limb of the cross in black, Art Deco-style lettering. This emblem has come to be known as the "cigar band" due to its uncanny resemblance to the same. On all but the "Erie-built" units (which were essentially run as a demonstrator set), GE U28CG, GE U30CG, and FP45 units, a three-part yellow and black stripe ran up the nose behind the band.

A "Circle and Cross" motif (consisting of a yellow field, with red quadrants, outlined in black) was painted around the side windows on "as-delivered" E1 units. Similar designs were added to EMD E3s, EMD E6s, the DL109/110 locomotive set, and ATSF 1A after it was rebuilt and repainted. The sides of the units typically bore the words "SANTA FE" in black, 5"– or 9"–high extra extended Railroad Roman letters, as well as the "Indian Head" logo, with a few notable exceptions.

Due to the lack of abundant water sources in the American desert, the Santa Fe Railway was among the first railroads to receive large numbers of streamlined diesel locomotives for use in freight service, in the form of the EMD FT. For the first group of FTs, delivered between December, 1940 and March, 1943 (#100–#119), the railroad selected a color scheme consisting of dark blue accented by a pale yellow stripe up the nose, and pale yellow highlights around the cab and along the mesh and framing of openings in the sides of the engine compartment; a thin, red stripe separated the blue areas from the yellow.

Because of a labor dispute with the Brotherhood of Locomotive Engineers, who insisted that every cab in a diesel-electric locomotive consist must be manned, FT sets #101-#105 were delivered in A-B-B-B sets, instead of A-B-B-A sets used by the rest of Santa Fe's FT's. Santa Fe quickly prevailed in this labor dispute, and FT sets from #106-onward were delivered as A-B-B-A sets.

The words SANTA FE were applied in yellow in a 5"–high extended font, and centered on the nose was the "Santa Fe" box logo (initially consisting of a blue cross, circle, and square painted on a solid bronze sheet, but subsequently changed to baked steel sheets painted bronze with the blue identifying elements applied on top). Three thin, pale yellow stripes (known as Cat Whiskers) extended from the nose logo around the cab sides.

1945: #2301 HH0600 is in Tiger Stripe paint scheme. After World War II, diagonal white or silver stripes were added to the ends and cab sides to increase the visibility at grade crossings (typically referred to as the Zebra Stripe scheme). "A.T.& S.F." was now placed along the sides of the unit just above the accent stripe, with the blue and white "Santa Fe" box logo below.

In January, 1951, Santa Fe revised the scheme to consist of three yellow stripes running up the nose, with the addition of a blue and yellow Cigar Band (similar in size and shape to that applied to passenger units); the blue background and elongated yellow "SANTA FE" lettering were retained.

The years 1960 to 1972 saw non-streamlined freight locomotives sporting the "Billboard" color scheme (sometimes referred to as the "Bookends" or "Pinstripe" scheme), wherein the units were predominantly dark blue with yellow ends and trim, with a single yellow accent pinstripe. The words "Santa Fe" were applied in yellow in a large serif Cooper Black font (logotype) to the sides of the locomotive below the accent stripe (save for yardswitchers which displayed the "SANTA FE" in small yellow letters above the accent stripe, somewhat akin to the Zebra Stripe arrangement).

From 1972 to 1996, and even on into the BNSF era, the company adopted a paint scheme often known among railfans as the "Yellowbonnet", which placed more yellow on the locomotives (reminiscent of the company's retired Warbonnet scheme); the goal again was to ensure higher visibility at grade crossings. The truck assemblies, previously colored black, now received silver paint.

Several experimental and commemorative paint schemes emerged during Santa Fe's diesel era. One combination was developed and partially implemented in anticipation of a merger between the parent companies of the Santa Fe and Southern Pacific (SP) railroads in 1984. The red, yellow, and black paint scheme (with large yellow block letters "SF" on the sides and ends of the units; space was left preceding the SF to complete the planned combined SPSF) of the proposed Southern Pacific Santa Fe Railroad (SPSF) has come to be somewhat derisively known among railfans as the Kodachrome livery, due to the similarity in colors to the boxes containing slide film sold by the Eastman Kodak Company under the same name. A joke among railfans is that "SPSF" really stands for "Shouldn't Paint So Fast."

In 1989, Santa Fe resurrected the "Warbonnet" scheme and applied the scheme in a modified fashion to two FP45 units, #5992 and #5998 (displaying "Santa Fe" in billboard-style red letters across the side). The units were re-designated as #101 and #102 and reentered service on July 4, 1989 as part of the new "Super Fleet" campaign (the first Santa Fe units to be so decorated for freight service). The six remaining FP45 units were thereafter similarly repainted and renumbered. From that point forward, most new locomotives wore red and silver, and many retained this scheme after the Burlington Northern Santa Fe merger, some with "BNSF" displayed across their sides.

For the initial deliveries of factory-new "Super Fleet" equipment, Santa Fe took delivery of the EMD GP60M, GP60B and General Electric B40-8W, which made Santa Fe the only US Class I railroad to operate new 4-axle (B-B) freight locomotives equipped with the North American Safety Cab. These units were intended for high-speed intermodal service, but toward the final days of the railroad, could be found working local trains and branchline assignments. 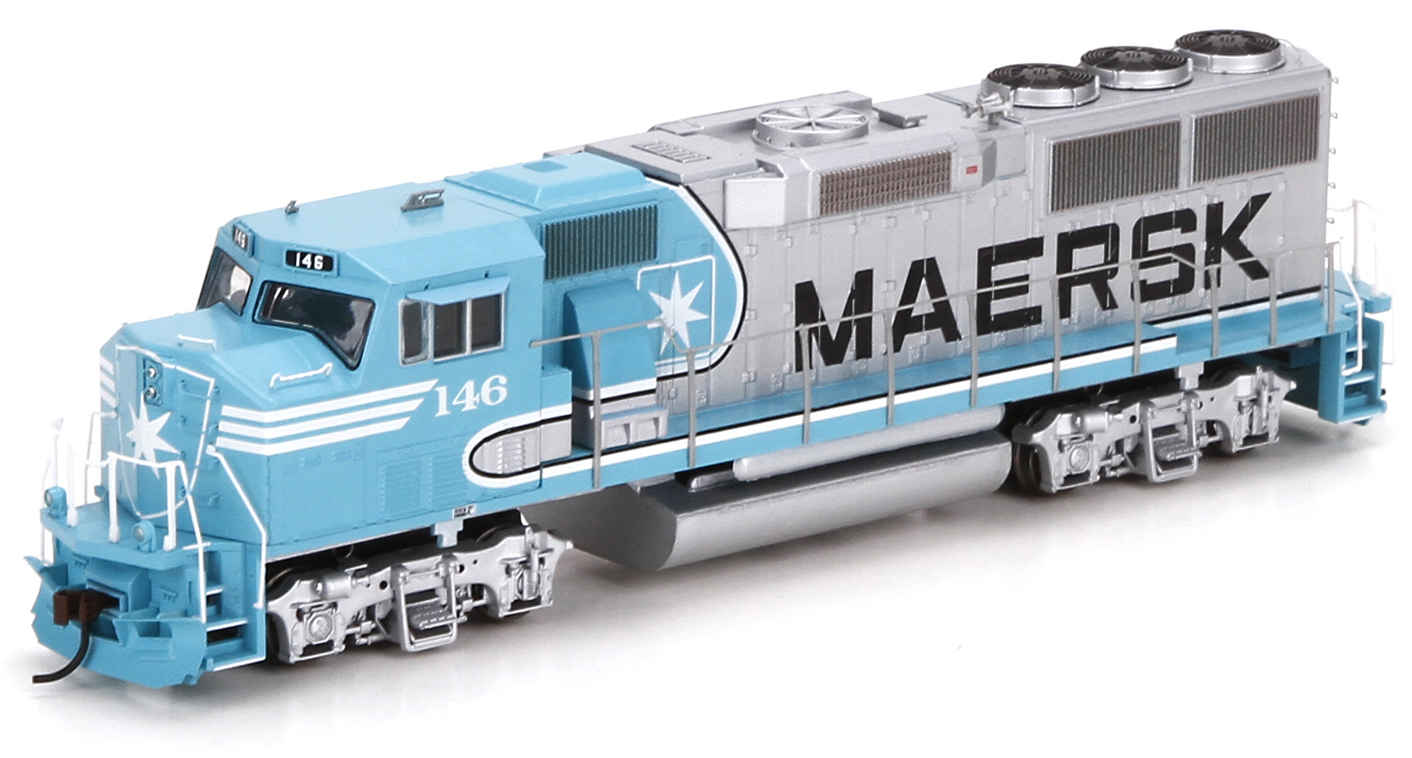