Shenware's Waybills is used to generate multi-move waybills. Waybills contain the information that you would expect: the shipper, the destination, and the contents (which may be "Empty for Loading"). They may also contain special instructions, such as icing a reefer prior to delivery.

Inbound traffic will arrive to Lewistown Junction yard by way of Altoona, Enola, or Northumberland. Cars will carry loads except for any empty cars previously requested by the Yardmaster.

A local crew will take all cars for a specific route out for delivery and follow the instructions on the Local Switching page.

Outbound traffic will be initiated by a waybill (not in a car card) arriving to the Freight Agent requesting a car "Empty for Loading". 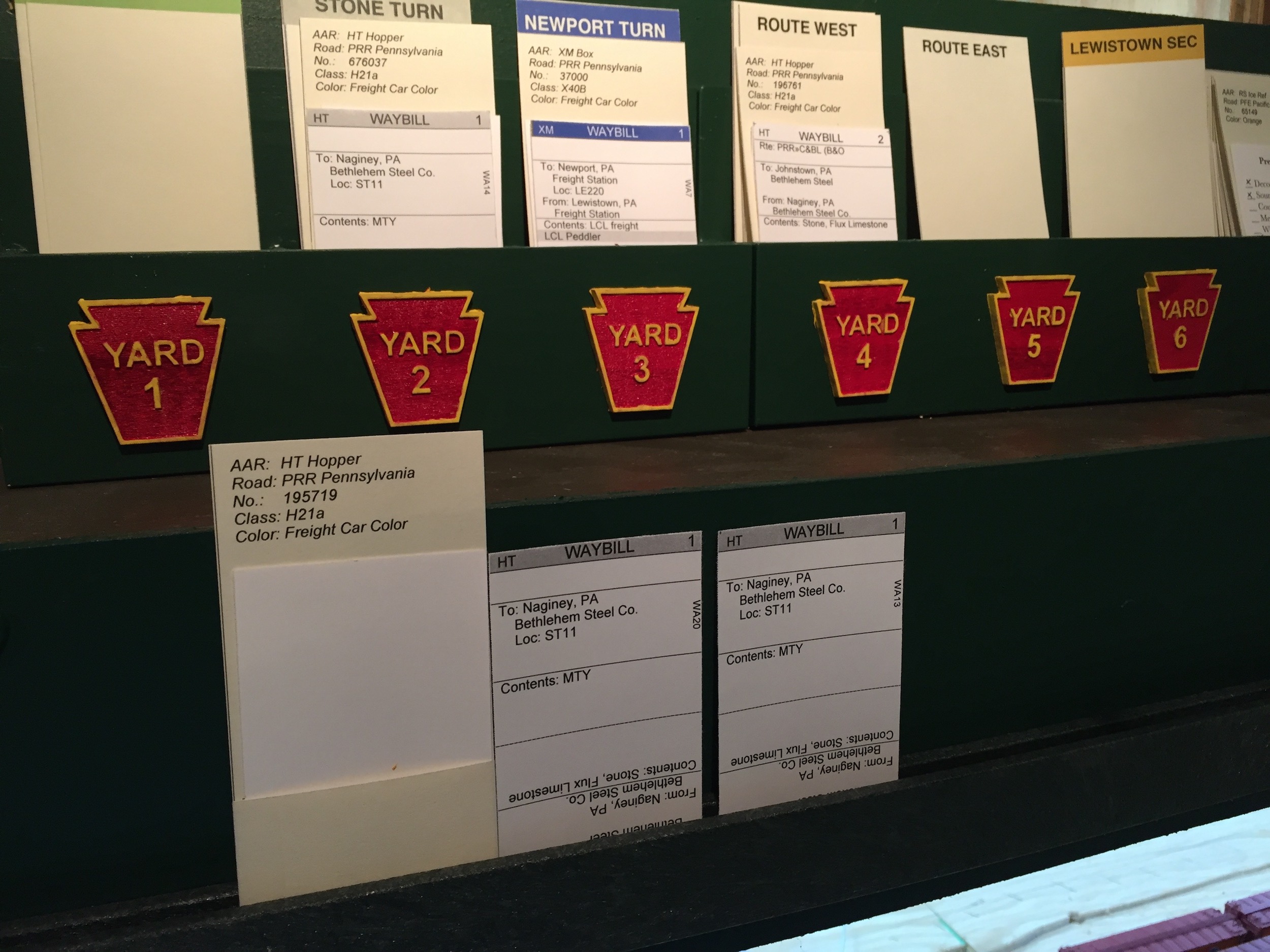 The Freight Agent works with the Yardmaster to assign the waybill to a car (via car card). Empty cars should be chosen in this order: foreign road cars in the same general direction as the shipment's destination, then home road cars. If not utilized for outbound shipments, foreign road cars should be sent home empty after a reasonable time to minimize "per diem" fees.

If a car is not available, the waybill is held until such time as a car is available. The Yardmaster can order empty cars from Altoona or Enola to maintain a supply on hand.

Once assigned, the car will be classified accordingly and sent out on the next local and delivered for loading. It will later be picked up and forwarded to its intended destination. It will then be routed through Altoona, Enola, or Northumberand.

An exception is made for LCL traffic, which is handled differently than car load traffic. Jeff Wilson's book, "Express, Mail & Merchandise Service" (Kalmbach), is an excellent read on the subject. Some excerpts follow. As specific prototype information is lacking for Lewistown, what follow are the LCL practices that have been established for the PRR Middle Division in HO Scale.

"Railroads handled a significant amount of packages, crates, and other shipments that didn't take up an entire boxcar. This is most commonly referred to as less-than-carload (LCL) traffic, and is also known as merchandise, package, and break-bulk freight."

"Individual boxes, crates, and packages are collected at small depots, local freight stations, or large terminals. They are shipped to the closest large freight house and offloaded. There, shipments are combined for common destinations, reloaded in boxcars, and routed to large transfer stations near their destinations."

"There, the process goes in reverse, as packages are unloaded, sorted, and reloaded for their final destinations, eventually arriving at a local freight station or depot, where shipments would be loaded on trucks for final delivery."

"A package or merchandise car usually refers to cars being handled on-line -- among freight houses, transfer stations, or combination depots on the host railroad."

Scheduled LCL exchange service (merchandise cars) is established between Lewistown and Altoona, Harrisburg, Northumberland, Newport, Mifflin, and Burnham. Multiple cars may be assigned to protect each schedule, as needed. 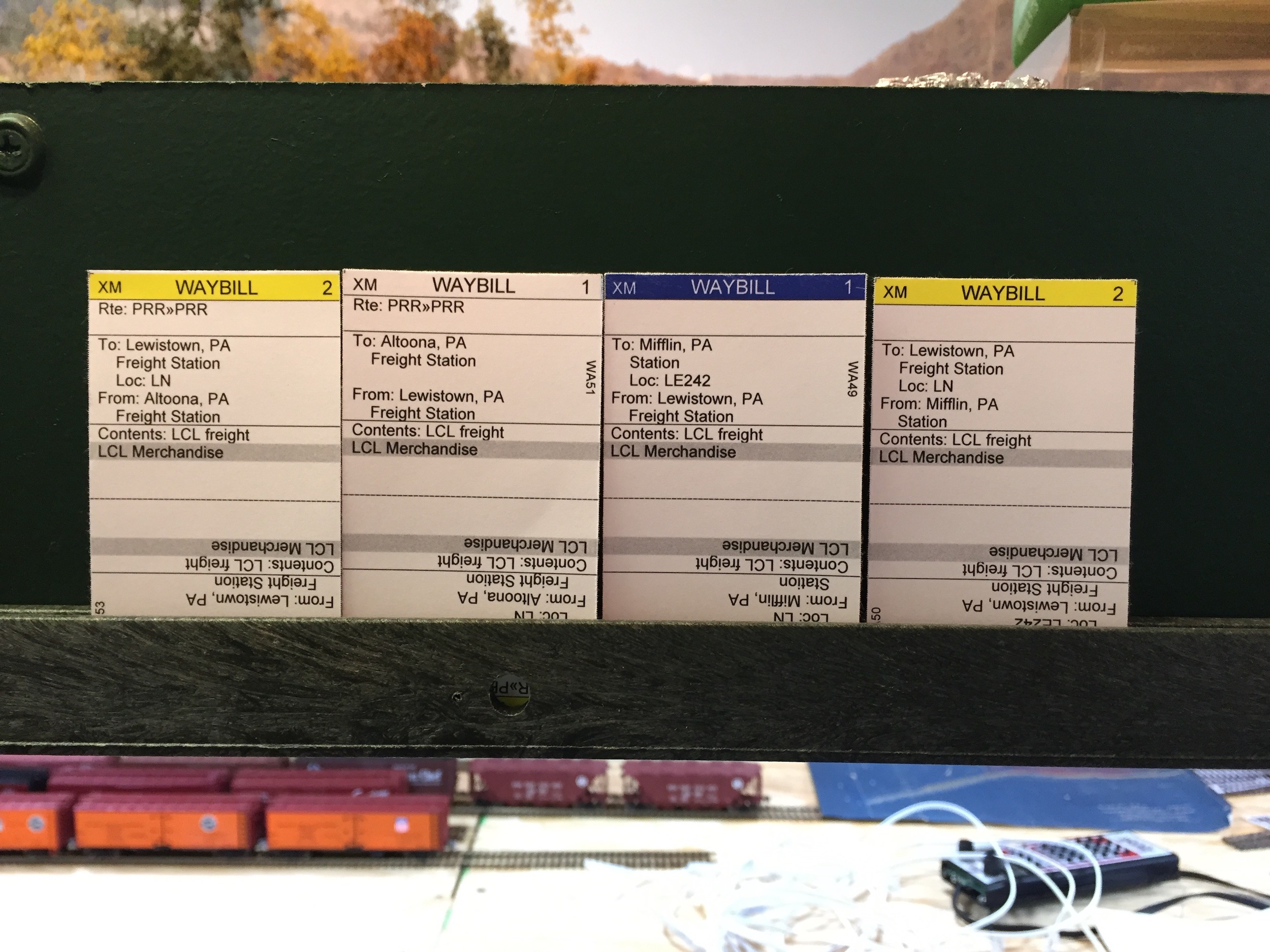 "A peddler or waycar were used to distrinute LCL to multiple stations along a route. They would be loaded at a larger freight house or transfter station. Peddler cars served stations too small to warrant receiving their own LCL car. The local may pause at a station for the peddler car to be unloaded; if the train had other work to do in town, the local would set out the peddler car at the depot until it was ready to depart and then pick it up."

The Newport Turn, Mount Union Turn, Milroy Turn, and trains S-70/S-71 each carry "peddler" LCL cars and pickup/deliver LCL traffic en route. These cars are all be routed to the downtown Lewistown freight station for shipment sorting. The process runs in reverse as well. 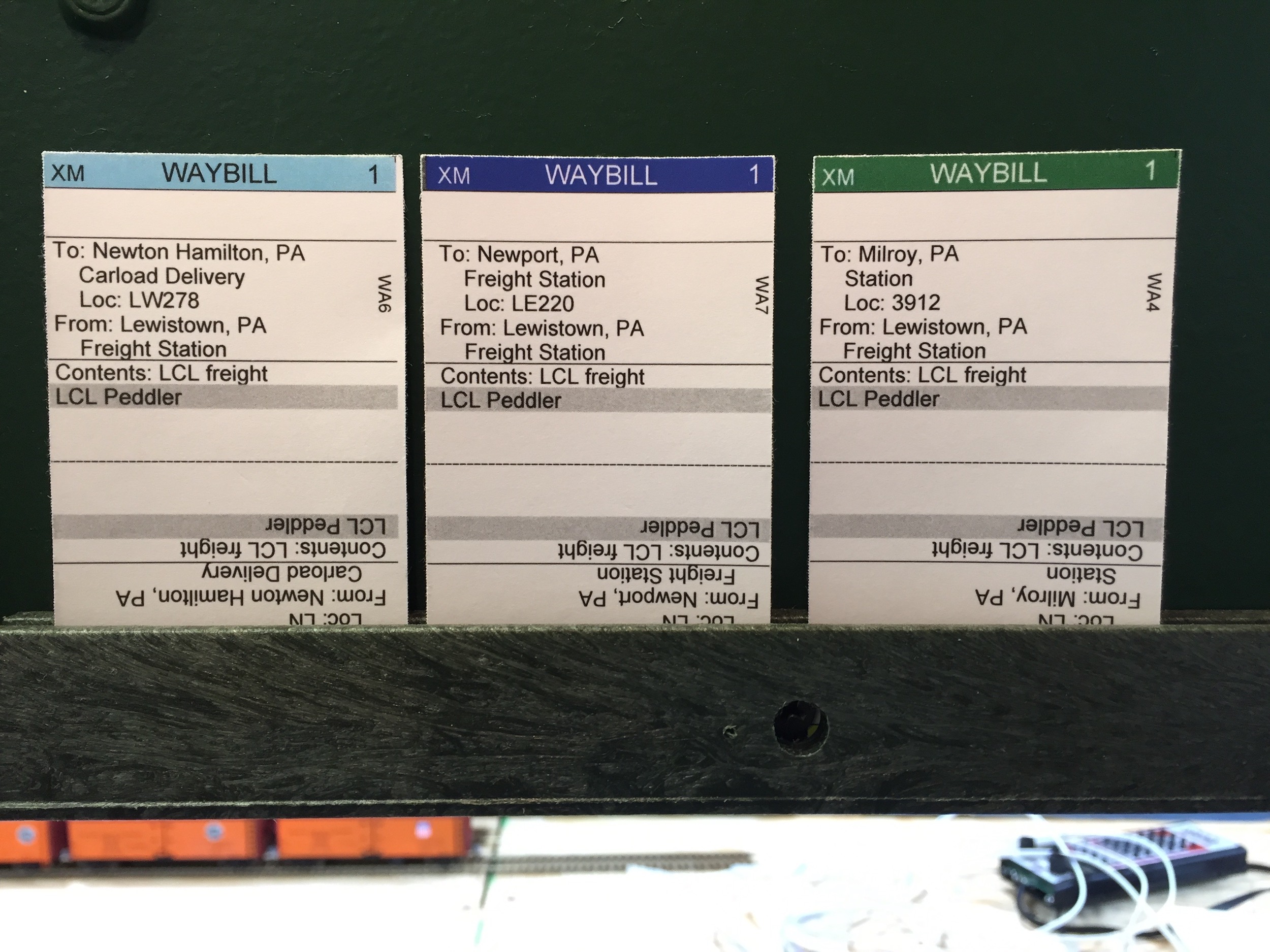 "A trap car was a car loaded with LCL items by a shipper on a rail siding at its own factory or warehouse. The shipper would load the entire car (or multiple cars), but the items were all individual shipments heading to multiple customers. The railroad would pick up this car and bring it to a nearby freight terminal, where it would be unloaded and the individual parcels sorted to their ultimate destinations."

Dedicated LCL cars (trap cars) are provided to Standard Steel Co. (Burnham). These cars are all be routed to the downtown Lewistown freight station for shipment sorting. The process runs in reverse as well. 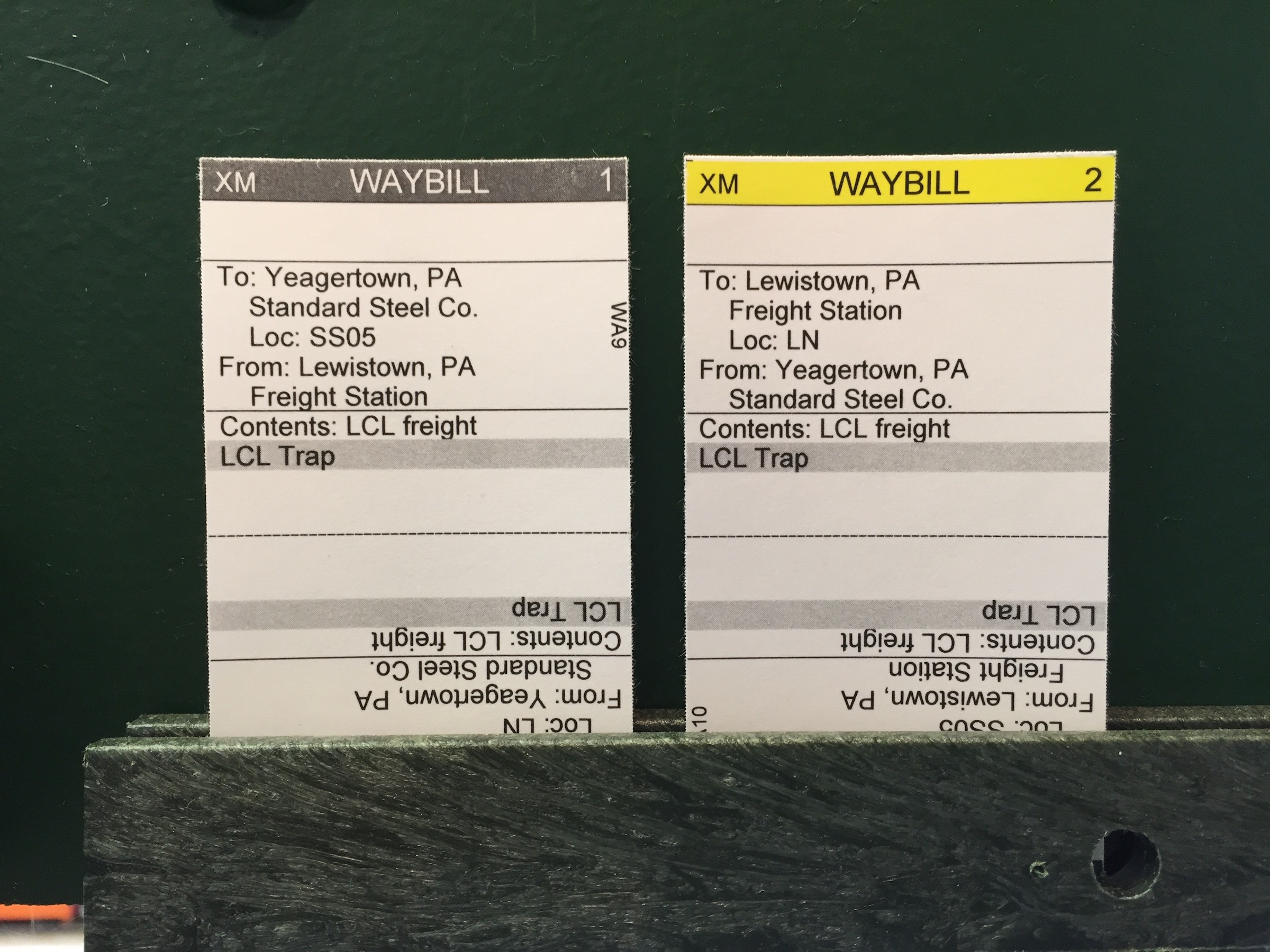 Below is shown the box car assigned to Burnham for regular Merchandise LCL service. At right are three waybills for shipments destined for offline customers in Burnham. When this car is loaded at the downtown Lewistown freight station, the LCL Waybills are placed into the car card for the Merchandise car. 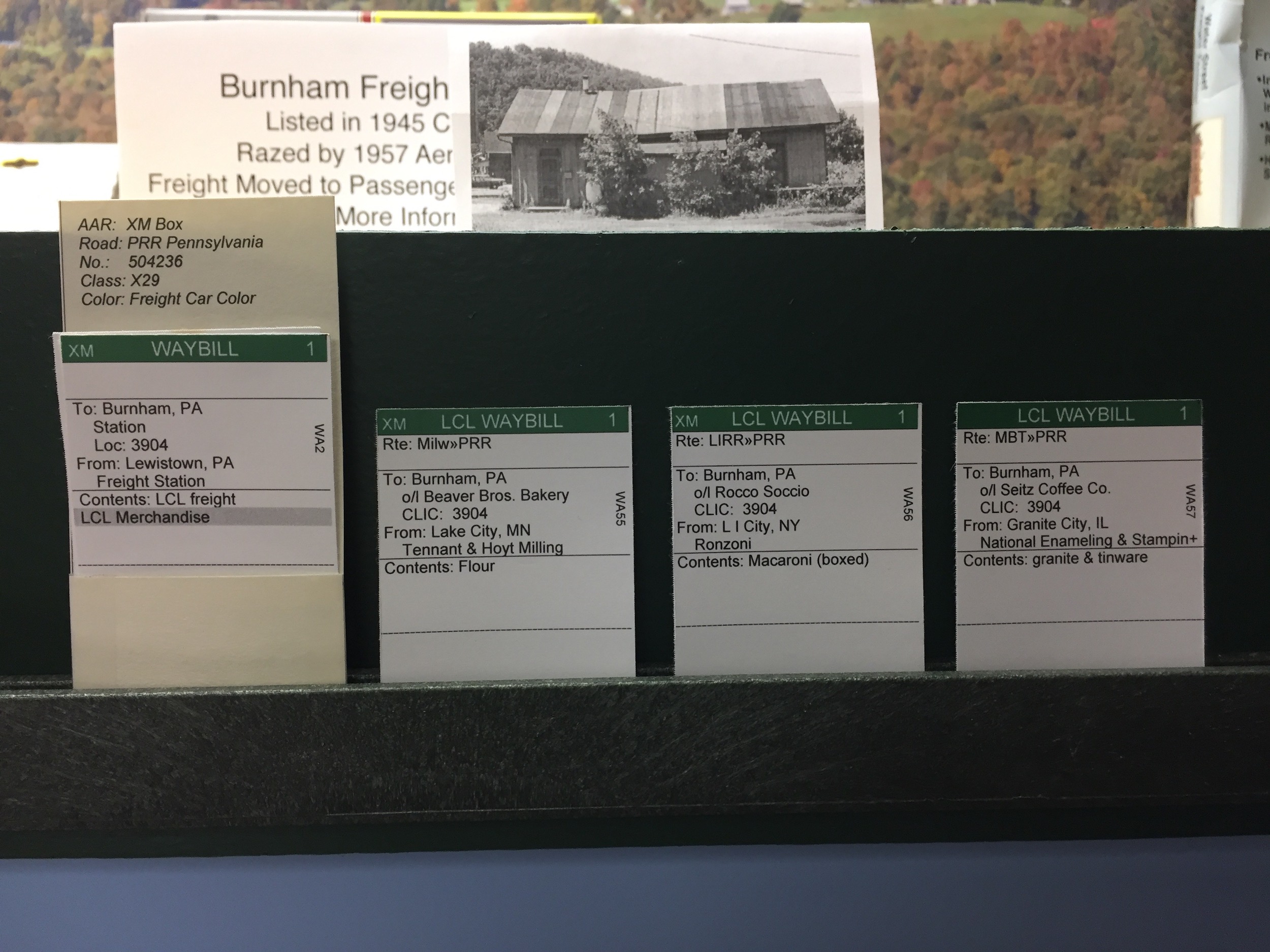 When a location has an assigned Merchandise car, all of its LCL waybills are inserted into the Merchandise car's car card. The approprite local will deliver the car to the destination (Burnham in this case). Between sessions the LCL waybills will be removed and outbound LCL waybills inserted. The car card will then be moved to the Outbound pocket for pickup and the return trip. The process repeats. 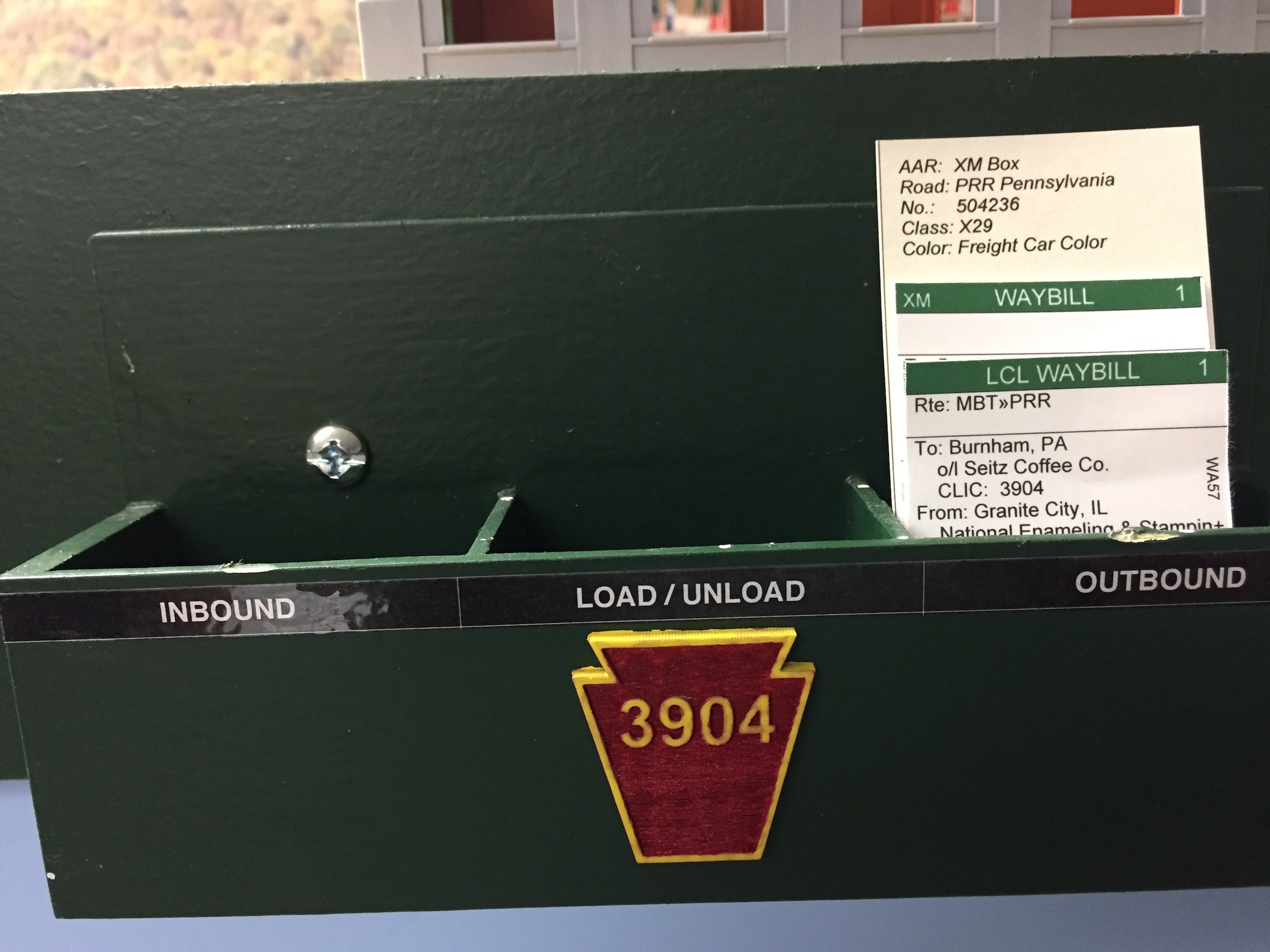 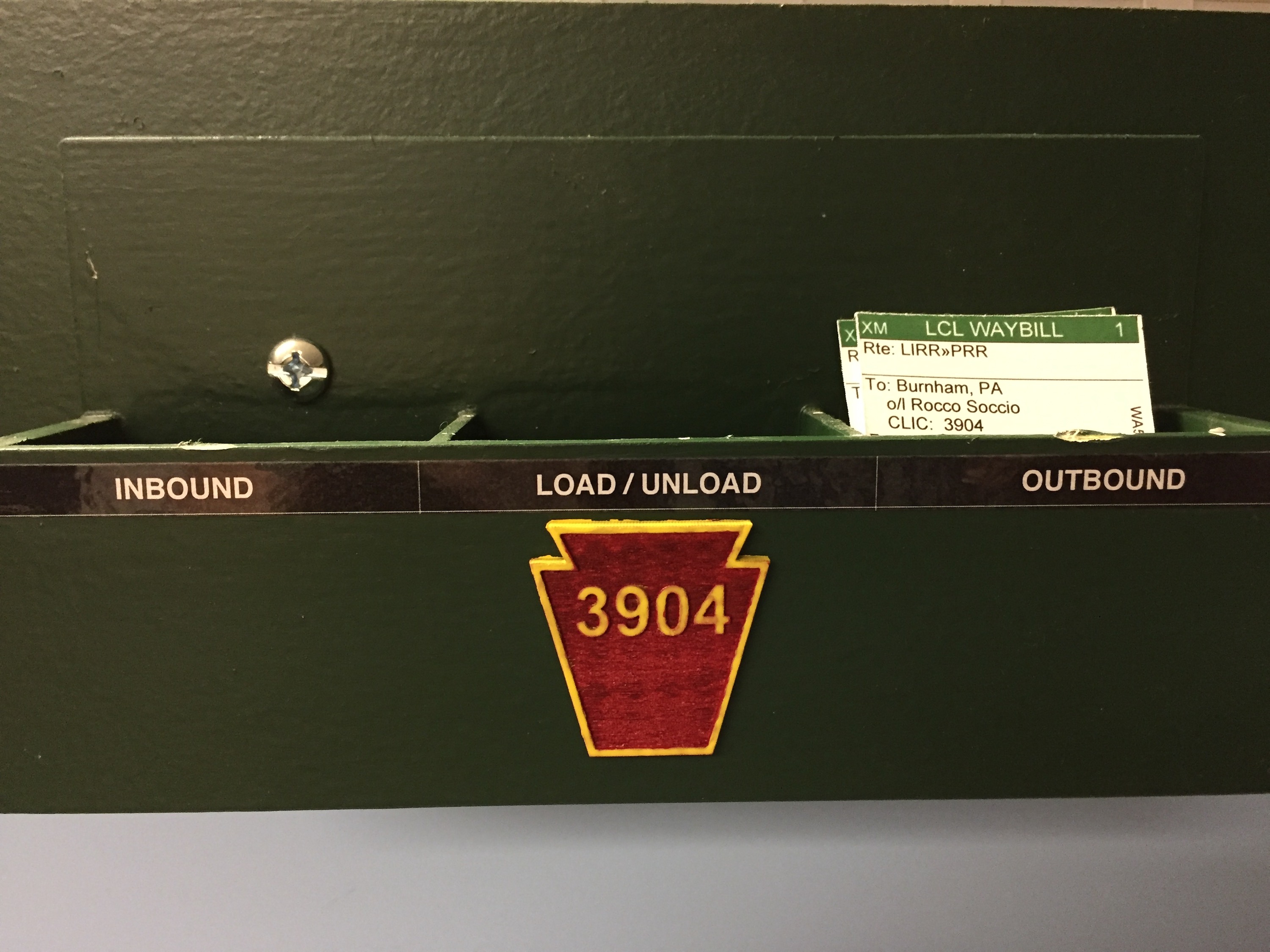