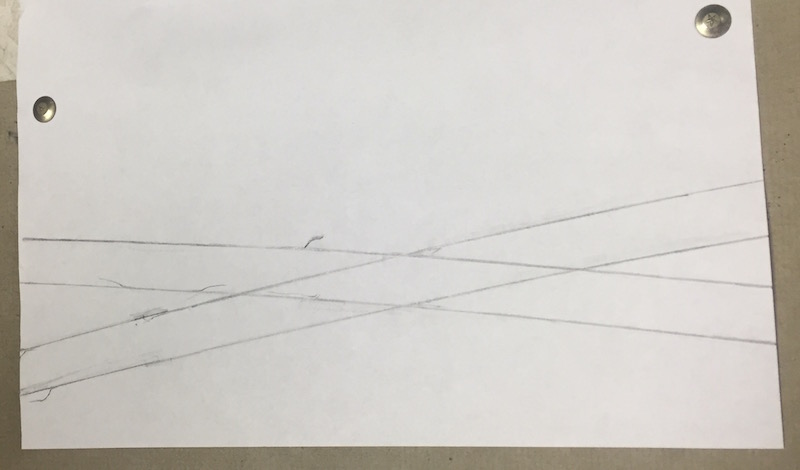 Dave instructed me to make a tracing of the desired crossing using flex track. I also had to acquire 36" lengths of dimensional wood equivalent to the size of the ties on my flex track (Atlas code 83) and pre-paint it. A mill file, pins, AC glue, a solder iron and solder, and track cutters were also required. 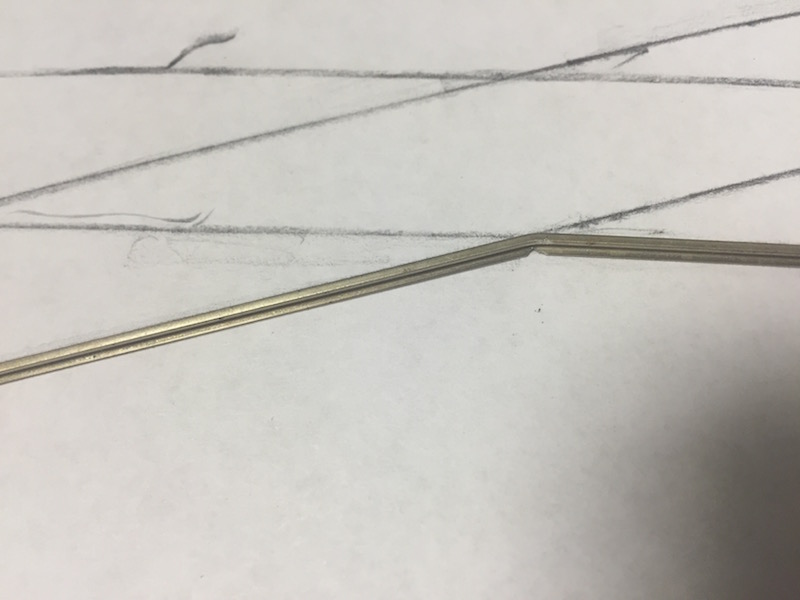 The first step was to thumbtack the tracing onto a scrap piece of homasote (top photo). Next, take a piece of rail well in excess of the length of the crossing. Using the mill file, make opposing notches in the base of the rail near the middle. This makes the rail bendable. Bend the rail to the desired shape to follow the wide outside angle of the tracing. 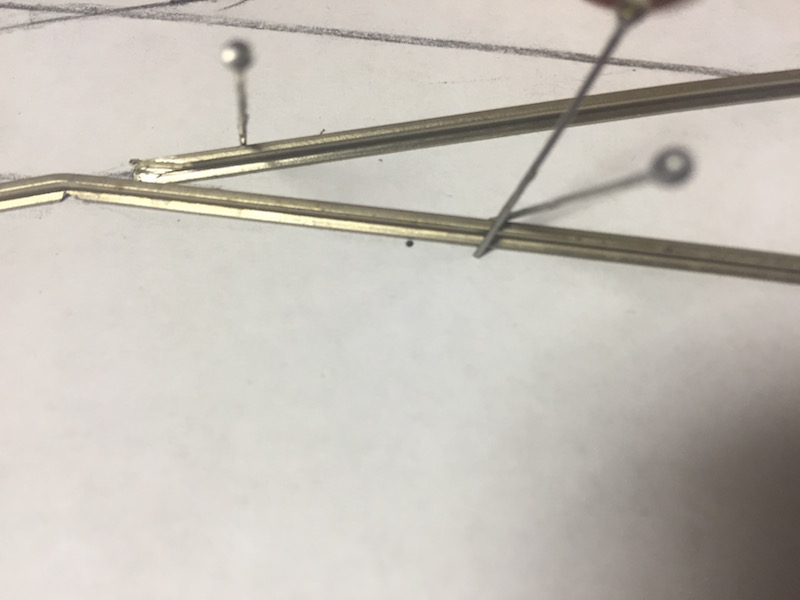 The outer angle gets pined into place so that it doesn't move. Then take another length of rail. With it following one of the tracing lines to extend one track through the crossing, use the mill file to shape its end to be parallel to the other rail. Allow the bottom edge to remain, to the point of actually touching the first piece. The gap between the two pieces should allow adequate clearance with an NMRA gauge. Pin in place. 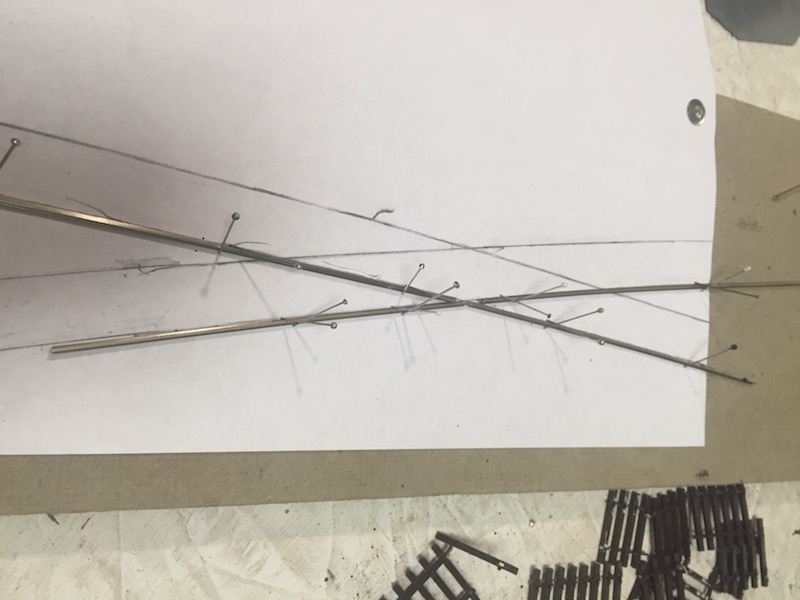 The process is repeated for the opposite side and is pinned. 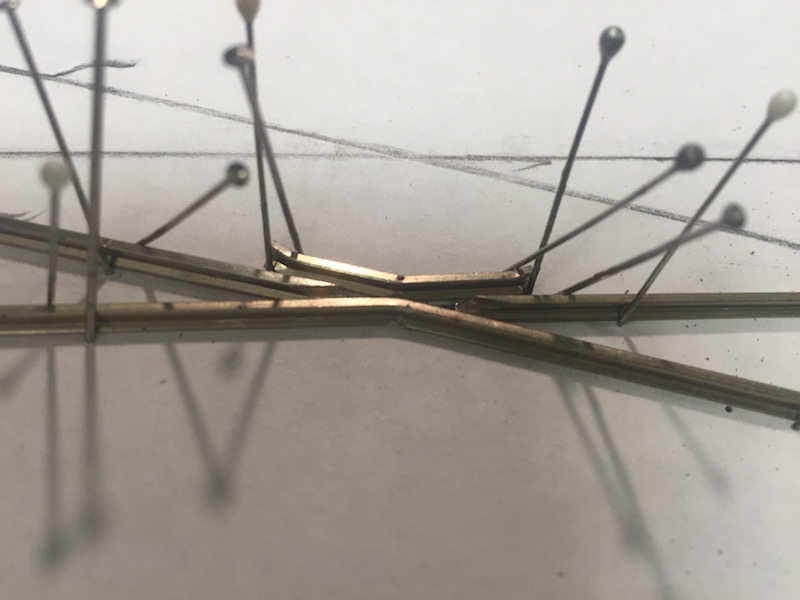 Next, a short piece of rail is cut to serve as a guard rail on the inside. The rail is notched in the same way the first piece was notched, then cut so both sides are equal lengths. The ends are bent slightly outward, then the rail is bent at the notch to match the angle of the crossing. Again, create adequate clearance with an NMRA gauge. Pin into place. 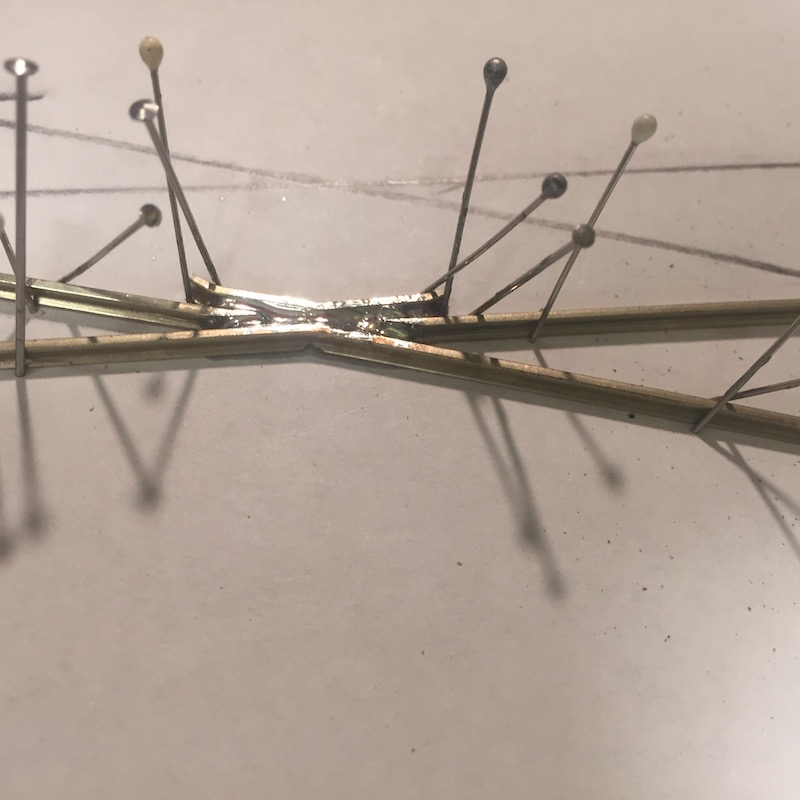 The entire joint area is then soldered, to the point of actually filling the joint with solder. It provides a very solid connection for the four pieces. Remove the pins, and use a scrap piece of hacksaw blade to "carve" out the solder until adequate wheel clearance is achieved.

Mark the piece on the underside, as well as its location on the tracing. Then create the same assembly for the opposite side of the crossing.

That's it for part one. In part two we'll build the frog side assemblies of the crossing. 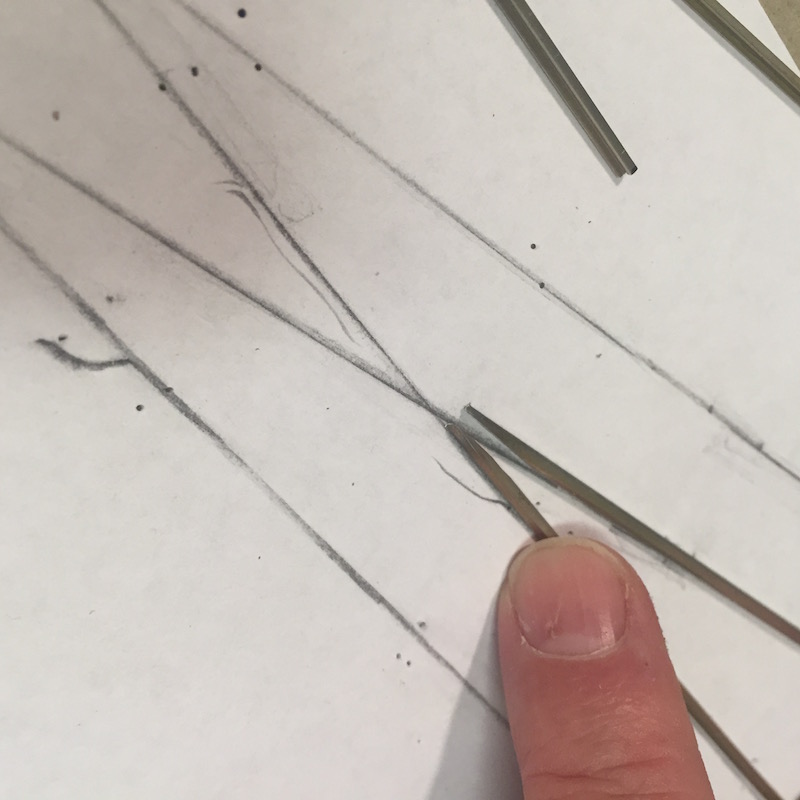 Picking up where we left last time, this session we create the acute angles of the crossing. We start by taking a pair of rails and, on a grinding wheel, shaping the ends so they make a clean, solid connection while fitting the angle on our template. 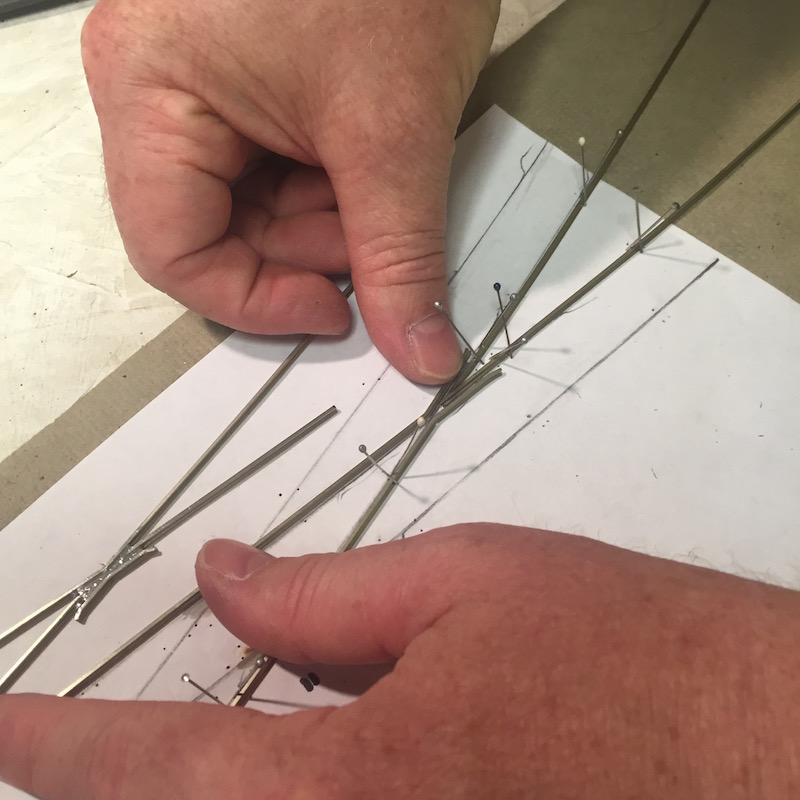 Using the same technique as in part one, we construct two bent rails that act as a guard rail on one side and the riding rail on the other. Great care is taken to make sure the riding rail perfectly aligns with the rail extending out from the frog, and the clearance between the guard rail and the main rail is sufficient. With the four pieces pinned in place, the entire joint is soldered together and then a channel filed to meet flange clearance. As before, the rails within the crossing run long; they will be trimmed back later. Repeat the process for the opposite side of the crossing. 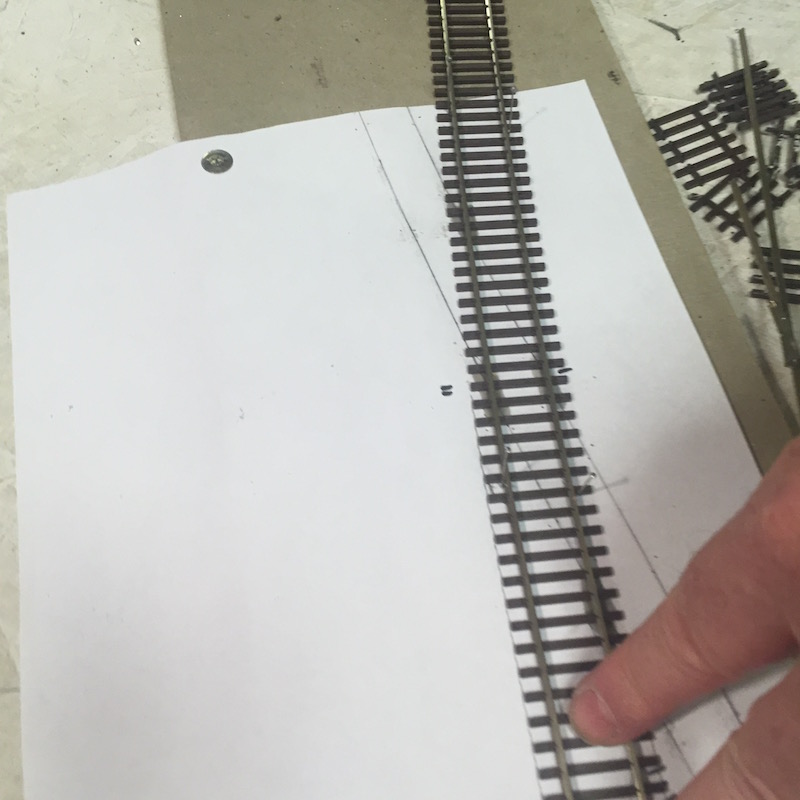 With the four assemblies set aside, a length of flex track is laid across the template, with the rails carefully placed on top of the tracings. Trace the outside edges of the ties, and trace the spaces between the ties (outside of the crossing where the two routes do not overlap). 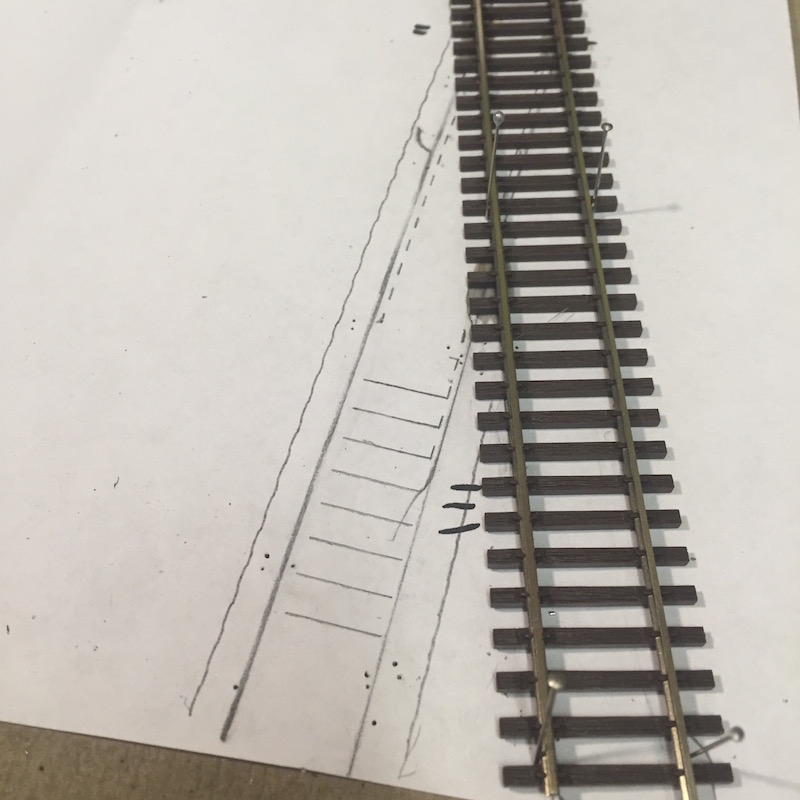 Repeat for the second route. 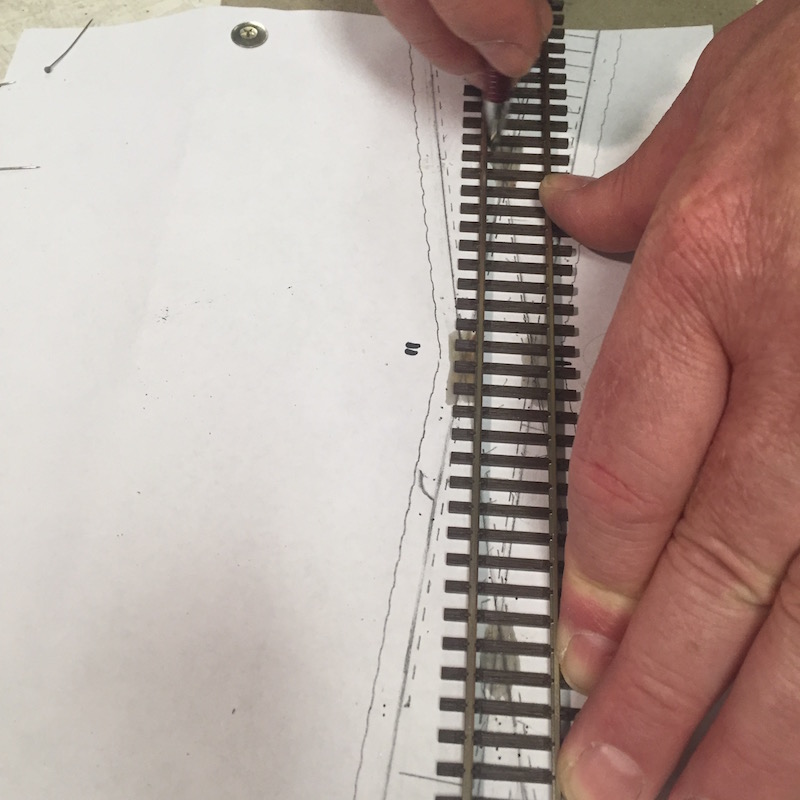 Finally, place the track in a position to bisect the two routes. Within the intersection of the crossing, trace the spacing between the ties. This will provide the alignment for the ties within the crossing. 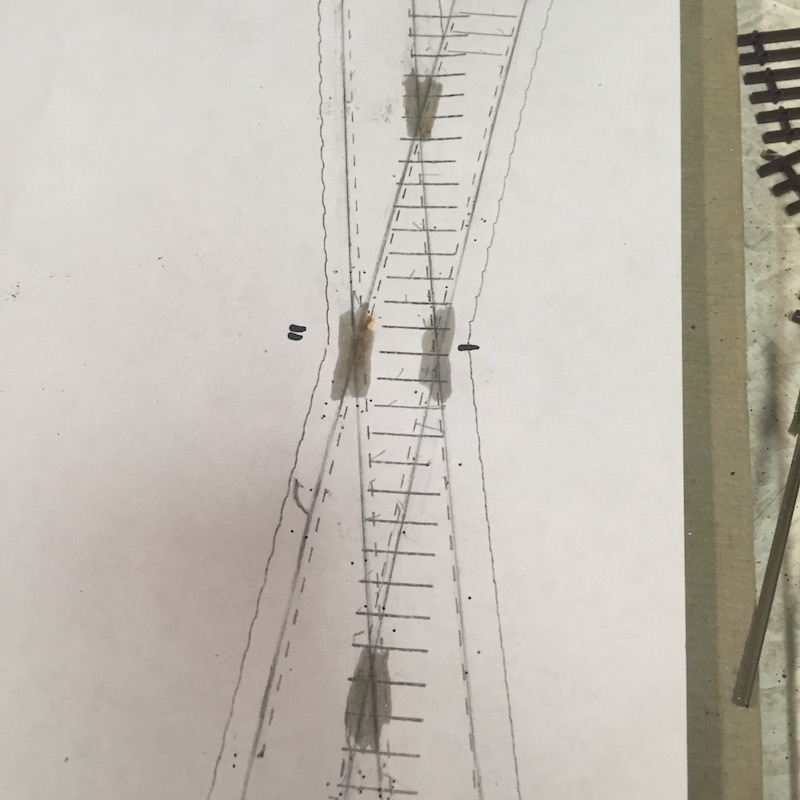 The end result is a template ready for laying ties, which we will address in part three. 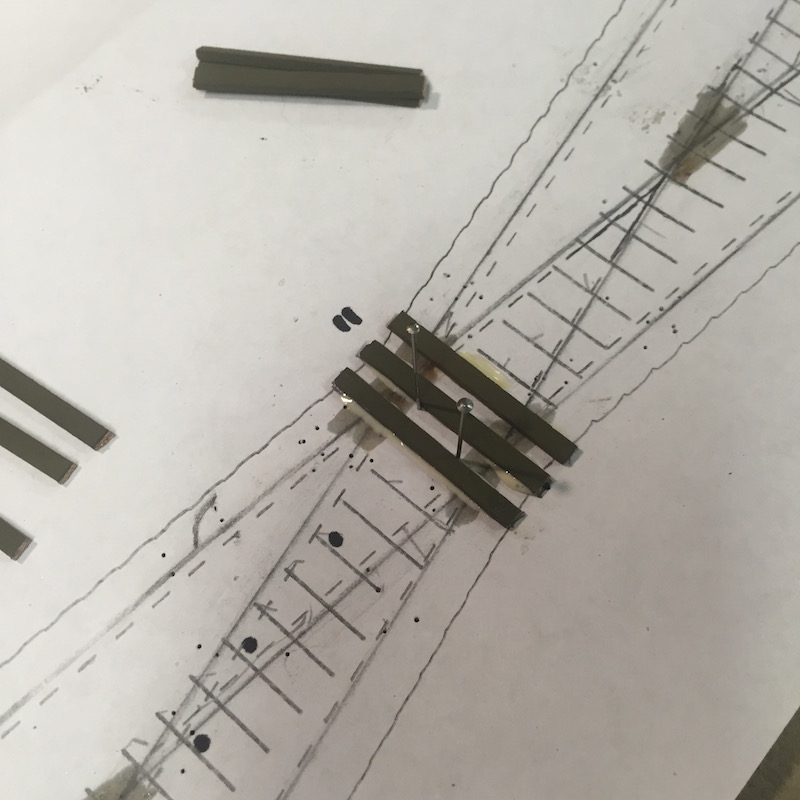 With our four rail segments assembled, we set them aside and begin work on the ties, starting at the center and working outward.

The ties are cut from 36" lengths of strip wood purchased at the local hobby shop, which were painted ahead of time with Rail Brown. 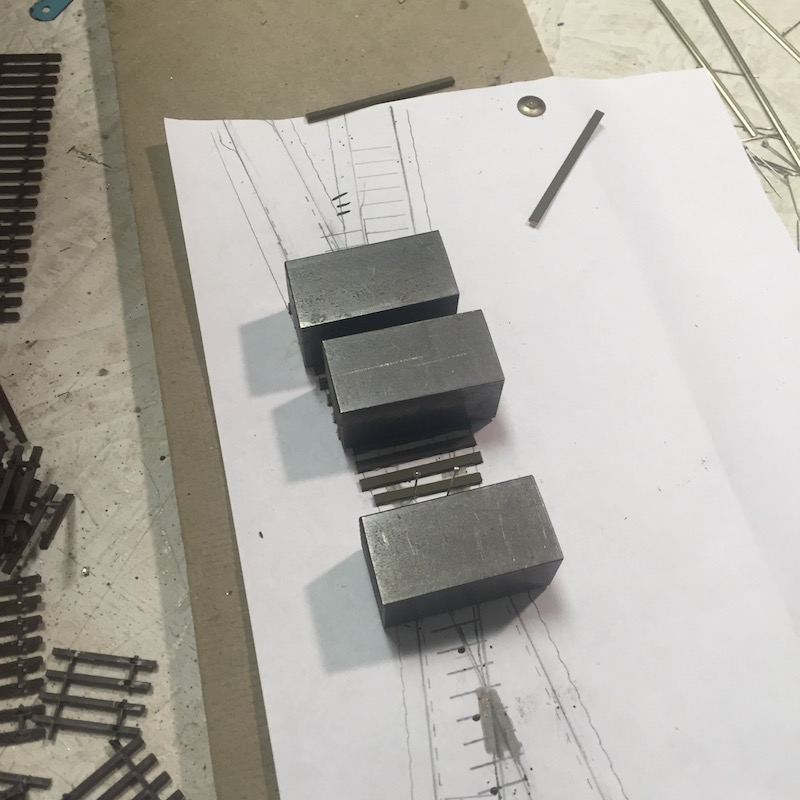 The process continues through the area where the diverse routes overlap. Once outside the overlap, the ties on the flex track will be in place. 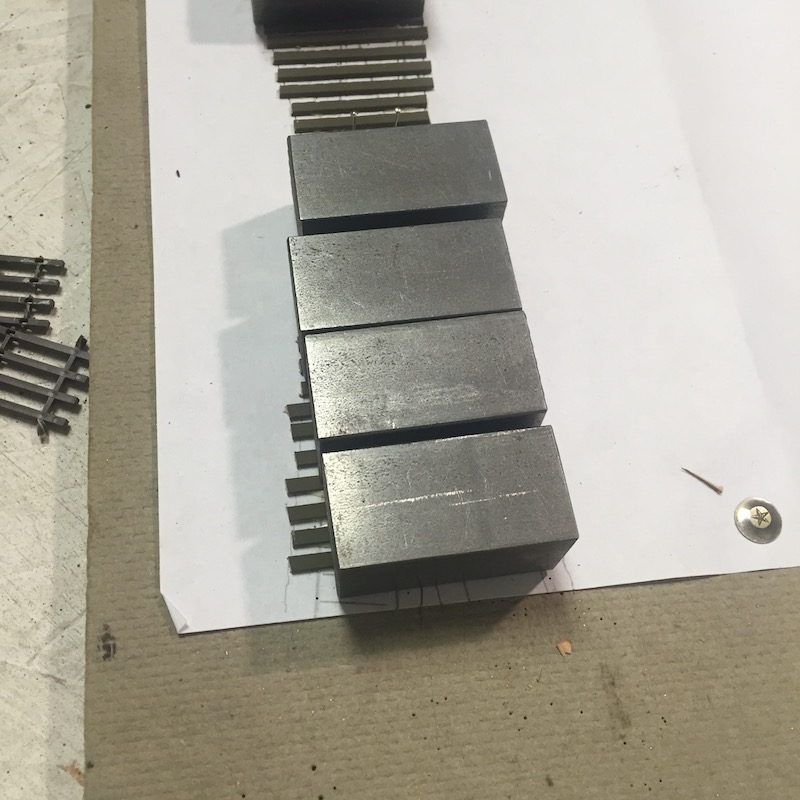 This is a really easy step, though one that would be more complicated for a turnout. Next time around we'll attach the rail assemblies to the ties. 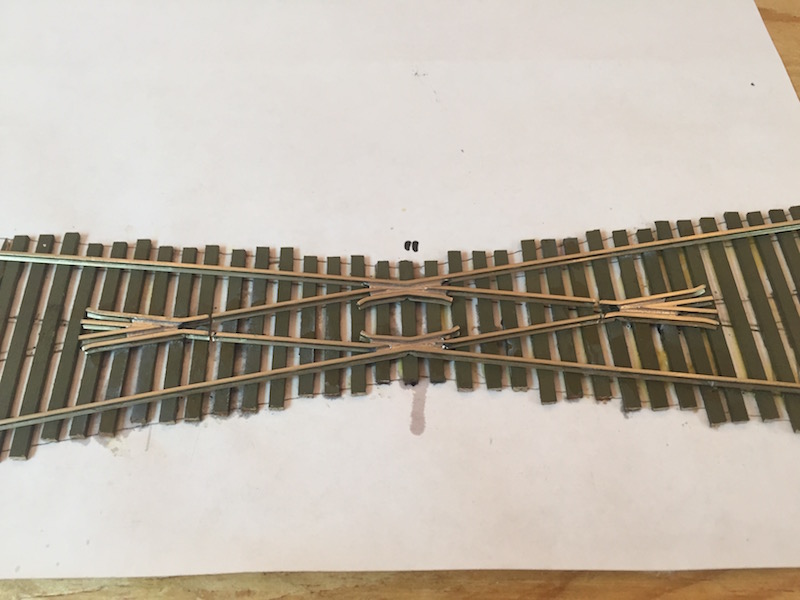 In my last blog on the subject, I demonstrated the process of gluing the ties to the template. In this entry, we affix the four rail assemblies to the ties.

Be reminded that we left all of the rails "running long". During this process they will be trimmed back. Facing the turnout, the lower quadrant assembly is laid on top of the template and pinned in place. The left, acute angle piece is then manipulated into place. A track gauge is used extensively to get the lower left track spacing just right. The rails extending to the left of the frog are marked and trimmed. This will electrically isolate the frog. The frog is returned to place and glued to the ties with CA. 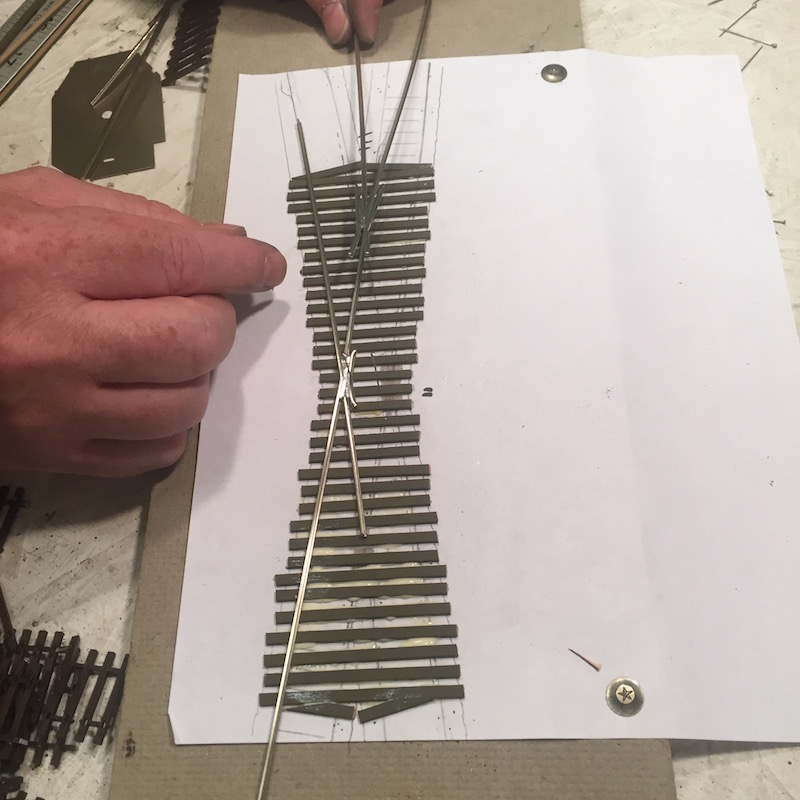 The through rail on the lower assembly is then trimmed up against the left frog, leaving just enough gap to isolate the rail. When absolutely certain that the track spacing in the lower left quadrant is still correct, the left half of the assembly is glued to the ties with CA.

The process is repeated while adding the right acute angle assembly and then the upper assembly. 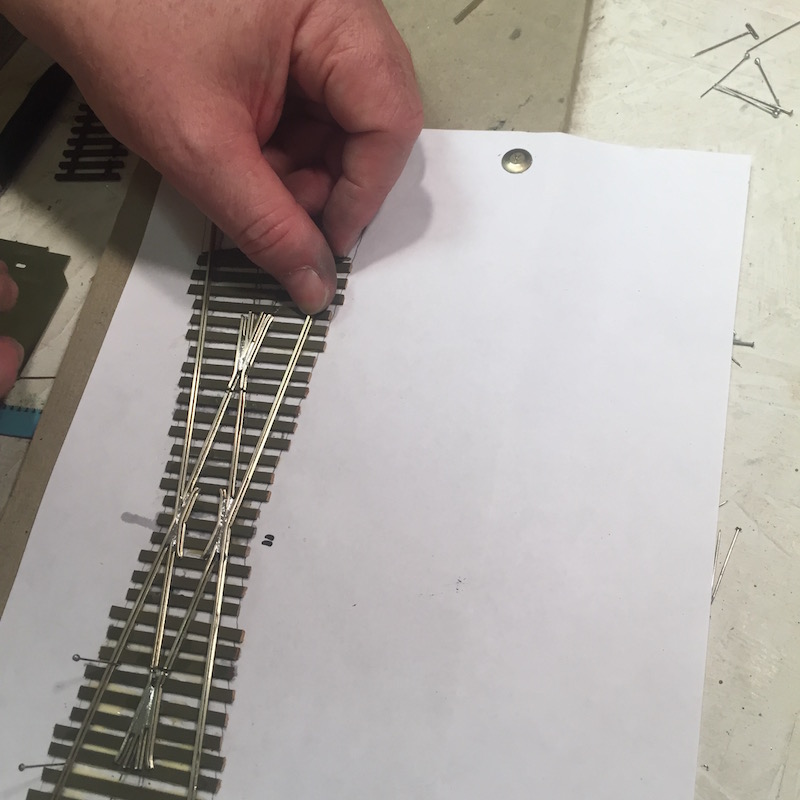 The lead photo shows the completed crossing (so far) with all four assemblies glued to the ties. The CA is only intended to be temporary until the track is spiked.

The photo below shows the crossing in place on the model railroad... 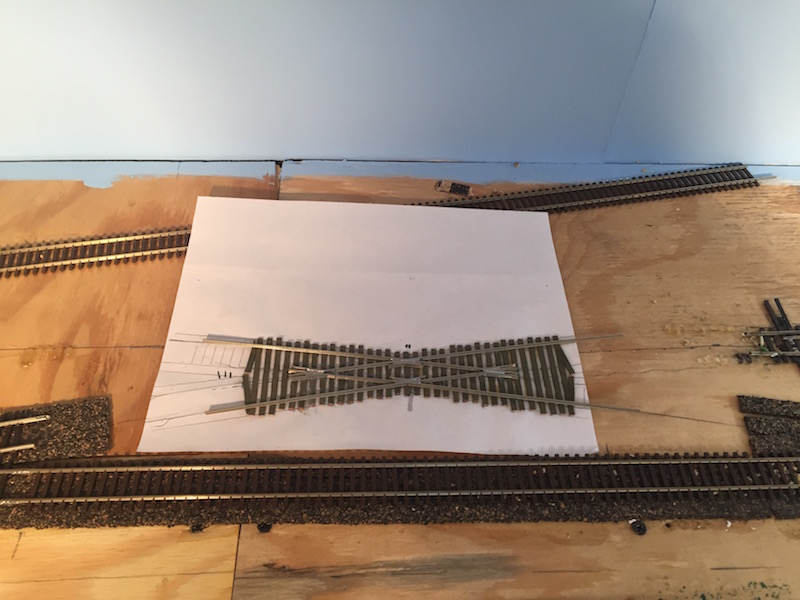 Next steps: Placing the assembled crossing on a piece of homasote and spiking down all of the rails. Then guide rails will be constructed and affixed opposite the frogs. 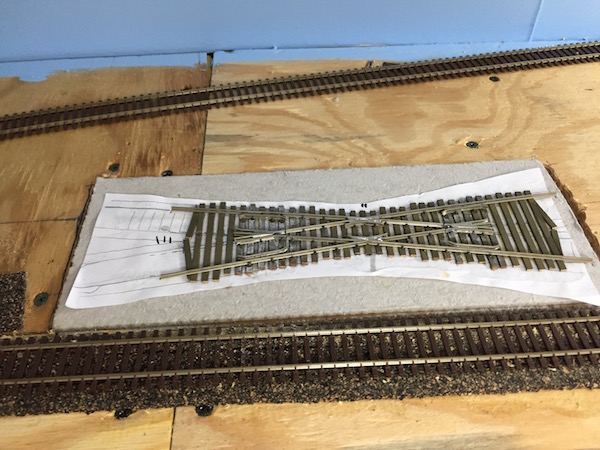 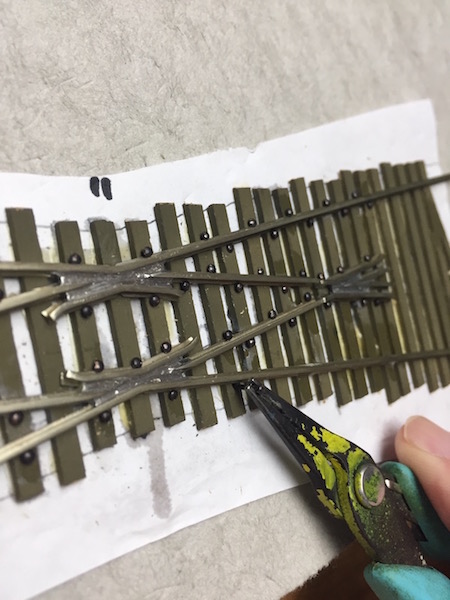 My next task on this project was to spike down the rails which had been temporarily CA'd to the ties.

I built upon a triple layer of homabed. I thought I had decent spikes on hand, but as the photo (right) illustrates, the heads are a bit heavy! The Timonium show is in a few weeks and I will shop for some more realistic spikes and replace them. I had to continue with something in order to make progress. 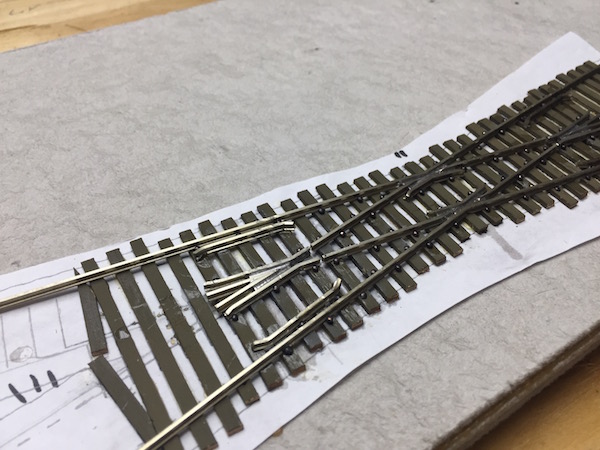 Following spiking, the next step was to create the four guard rails and then spike them in place (below). I then trimmed the homabed down to a more managable size for installation on the layout.

My mainline track sits on HO scale cork roadbed, branch lines on N scale cork roadbed, and sidings directly on the plywood subroadbed. This crossing happens to be at Milroy at the end of the Milroy Secondary. It is a crossing of sidings to create a runaround, which replaced a wye during the mid-1950s.

As a siding, no cork roadbed was in place, so I had to cut out the plywood subroadbed to allow placement of the crossing assembly. I had to place support from the underside of the hole (see below). The lead photo shows the crossing in place. 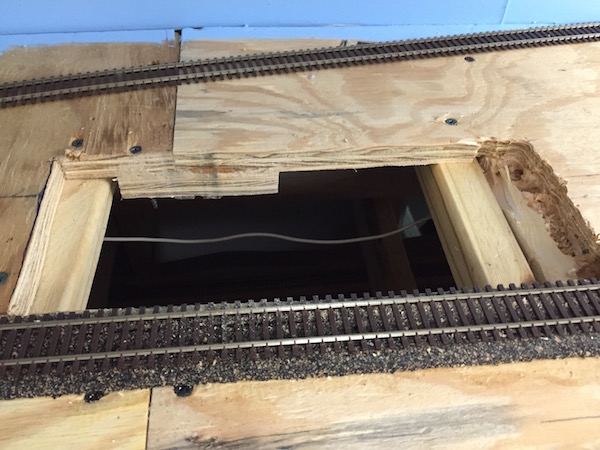 In the final episode of this build, I fitted the approach tracks for each quadrant of the crossing. In each quadrant, one rail uses a standard rail joint and the other extends to, but does not quite meet, the frog. 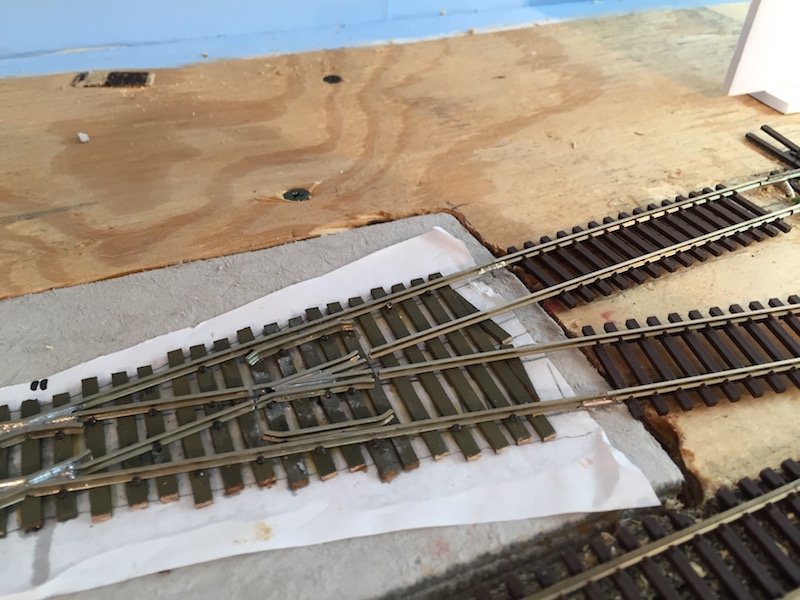 After test fitting, I glue the track down with my usual technique using clear caulking. I also filled the crack around the crossing base so it doesn't become a "black hole" for ground cover later. The photo below shows the last of the four quadrants being glued down. 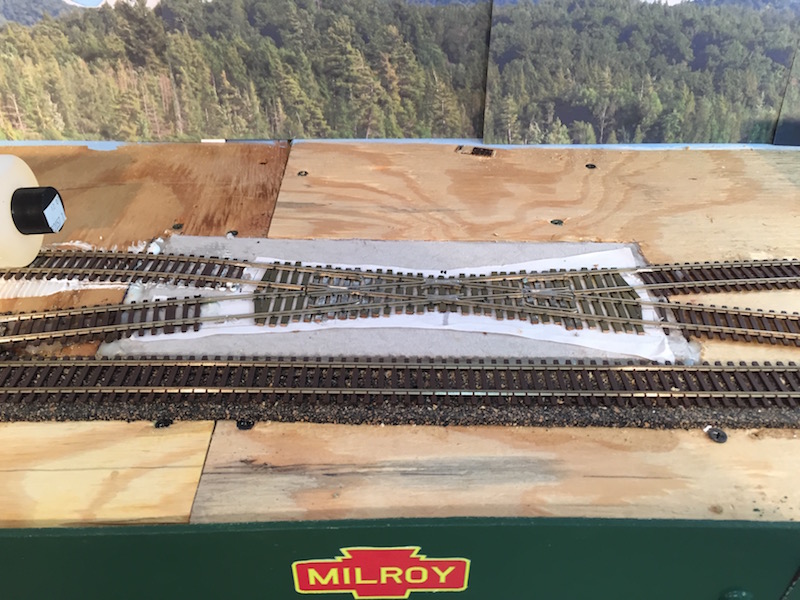 The next big test would be to apply power... would there be any shorts? I flipped the switch, and no unexpected chirps from my Digitrax command station. Success!

The next test would be to see how well locomotives would navigate the crossing. I didn't waste time and went straight to steam. I put a Broadway Limited Imports PRR class H10s 2-8-0 consolidation on the rails. To my surprise, it not only passed non-stop through the crossing, but was able to do so at a creeping speed!

The project is complete, with thanks going out again to Dave Trone for the instruction on how to scratch build track. May need a new customer on the layout -- Trone's Frog & Switch!