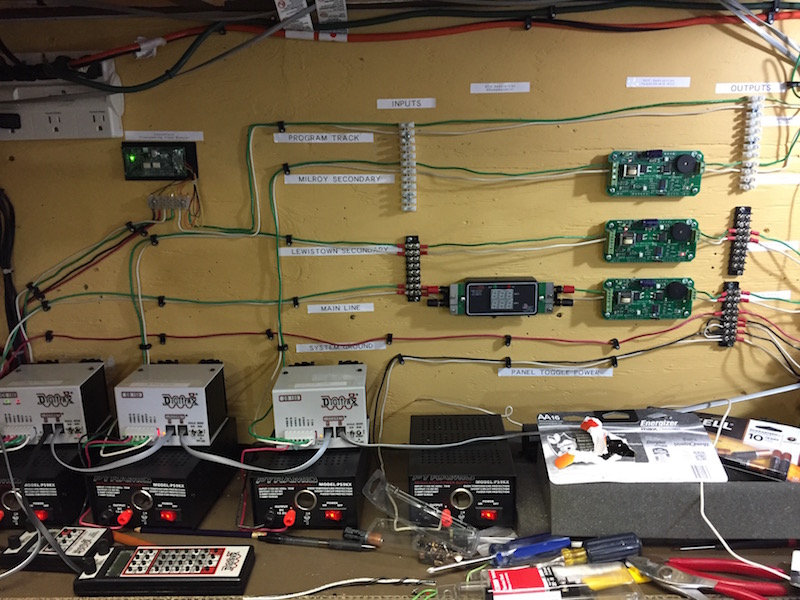 Finally, I reduced the installation to one section of track. Still didn't work! What?

Based on feedback from the Digitrax Yahoo group, I followed the suggestion to reverse the track polarity. What? It worked! After 15 years of using this same equipment, why would it suddenly decide it wanted to work on reverse polarity?

Anyway, I was able to get the main line back online. I opted to run my open house with just the main line and left the two boosters out of the loop at the time. I later got the upper level running.

Fast forward to today... With the boosters disconnected, I was able to bring the system online with either polarity, so I went back to the original side. With the first booster on, I had a short indication. The second booster would sometimes work and sometimes short. When it worked, the track status was either green or red (not yellow), indicating "zero stretching" or use of an analog locomotive, which I knew wasn't the case. To cover the bases, I removed all locos from the tracks in the zone. No joy.

However, as I was doing this, I noted that I had "staged" a K4s on a yard lead for the open house. Upon closer inspection, one of the tender trucks was exactly on top of the insulators where power districts A and B met. When I moved the loco, the first booster came online!

What are the chances of that? Turns out the first booster problem was one loco bridging two zones and I guess the command station and booster couldn't figure it out.

As for the second booster, it has had a long-standing problem where sometimes it doesn't come online. I'd jiggle the edge connector and it would come on. I figured I had a connection issue. So I swapped booster A and B and the problem that booster B had migrated with it! Booster A in Booster B's spot was working perfectly! So the problem was not with the edge connector. I swapped things back and Booster A continued to work fine.

I opened up Booster B to see if there was anything obviously. There wasn't. There's very little inside these things. So I figured after 15 years I just needed to replace it. As (bad) luck would have it, I used to have two more boosters in my N scale days, but I sold off the extra units.

To my surprise, when I reconnected Booster B after reassembling it, it worked fine. What? (There was still a track shot.)

After a few minutes Booster B went offline again. Note that it goes offline even when the wires to the track are disconnected! So now I am debating whether or not to get a replacement booster, or turn my DCS100 into a booster and purchase a new command station. Jury is still out.

I am still getting a short indication on the Booster B zone. However, I feel that I cannot trust the results until I replace the booster.

As of now, I am reporting "progress"!