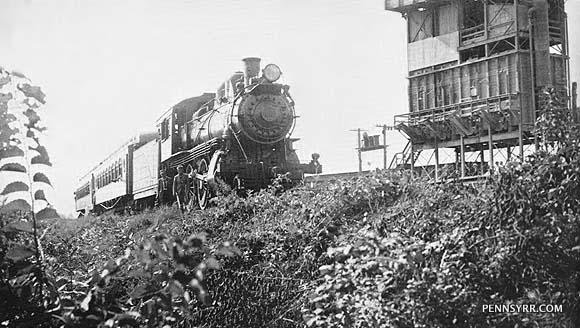 Above: A 1937 excursion train passes the tipple at Naginey.

The first batch of Naginey waybills covers the month of April 1942. The quarry produced a total of 800 car loads for the month, as follows:

From the above data, I pose the following questions:

At the 2017 annual meeting of the Pennsylvania Railroad Technical & Historical Society I met Dan Marnell, author of a recently published book on the Pennsy's Shamokin Branch.

I was stunned to learn from Dan that Naginey shipped stone to Bethlehem Steel's plants at Bethlehem via the Shamokin Branch... by shipping west, no less! There is no evidence of these shipments in the 1942 data, so it must have started later.

The short route between Naginey and the Shamokin Branch would be via the Sunbury & Lewistown Secondary (S&L), but it was taken out of service in 1955 and each end served as a stub. It stands to reason that these shipments did not start until after the line was severed, or continued use of the line would be justified.

The stone was shipped west on the Middle Division to Tyrone where it rode the Bald Eagle Branch and then the Susquehanna Division to Northumberland, then up the Shamokin Branch. It was handed off to the Lehigh Valley at Mount Carmell, just like the ore trains!

Casual estimates are 209 miles on this route versus 80 miles over the original S&L route.

Skip forward to the other batch of Naginey waybills. They cover January through June of 1966. All of the shipments to Bethlehem Steel at Bethlehem. There are no longer any shipments to Johnstown or Steelton!

This prompts these questions:

It is worth noting that there had also been a quarry on the line at Shrader's, just west of Naginey. Listed as National Limestone, there were no waybills provided for this entity so it may have closed prior to 1942.

I will soon share my findings for inbound and outbound shipments via the Burnham station for the period 1935-1943.