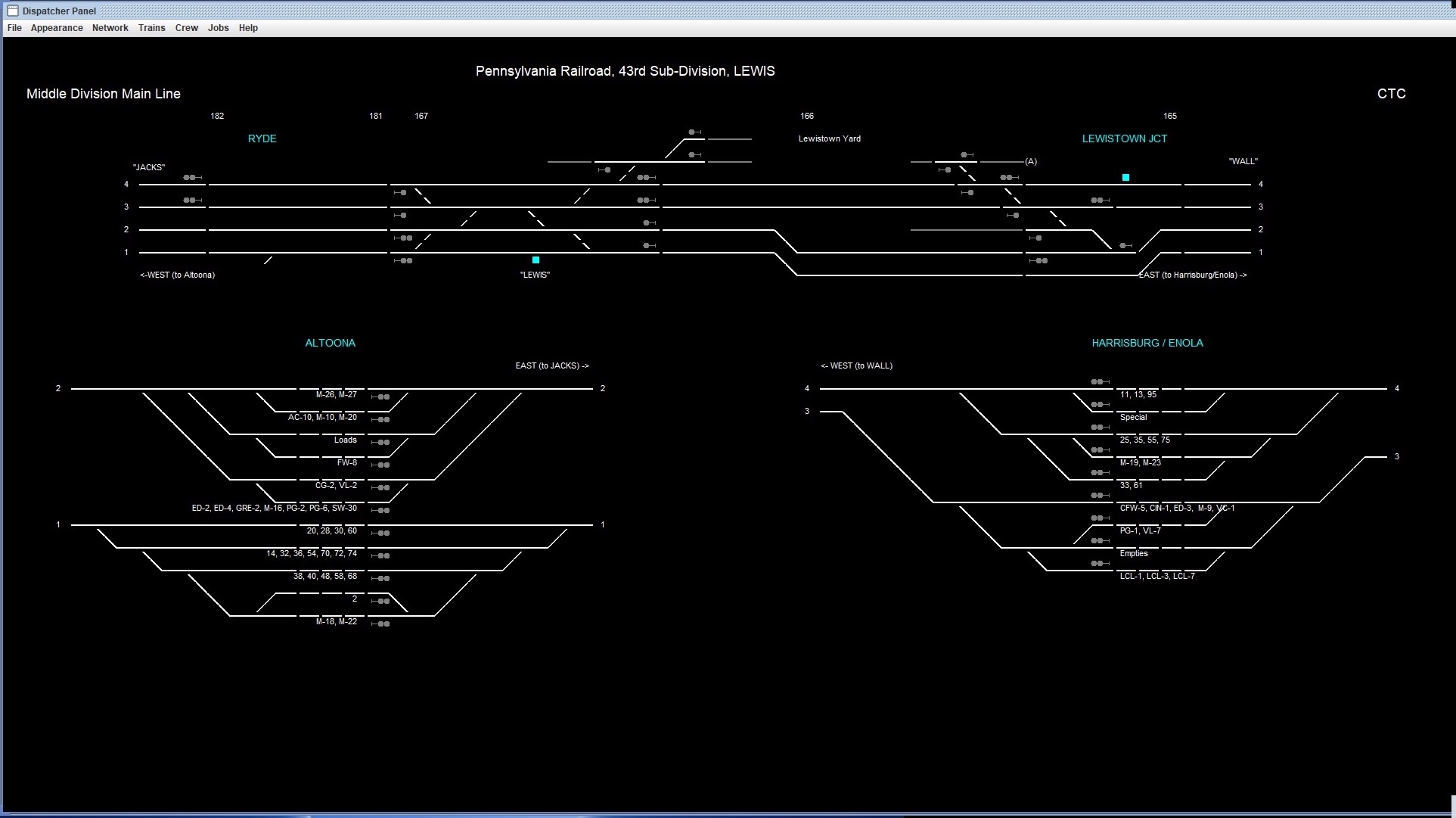 This past week I had the pleasure to participate in remote operations on Dave Abeles' Conrail Onondaga Cutoff. While remote dispatching is nothing new, remote control of actual trains is leading edge. Dave probably wasn't the first, but he is definitely at the forefront and has gained a lot of visibility over the past year.

I met Dave through Lionel Strang's A Modeler's Life podcast. He's also been featured in Railroad Model Craftsman and Model Railroader over the past few months and, this coming month, has a feature on remote operations in Model Railroader... look for it! 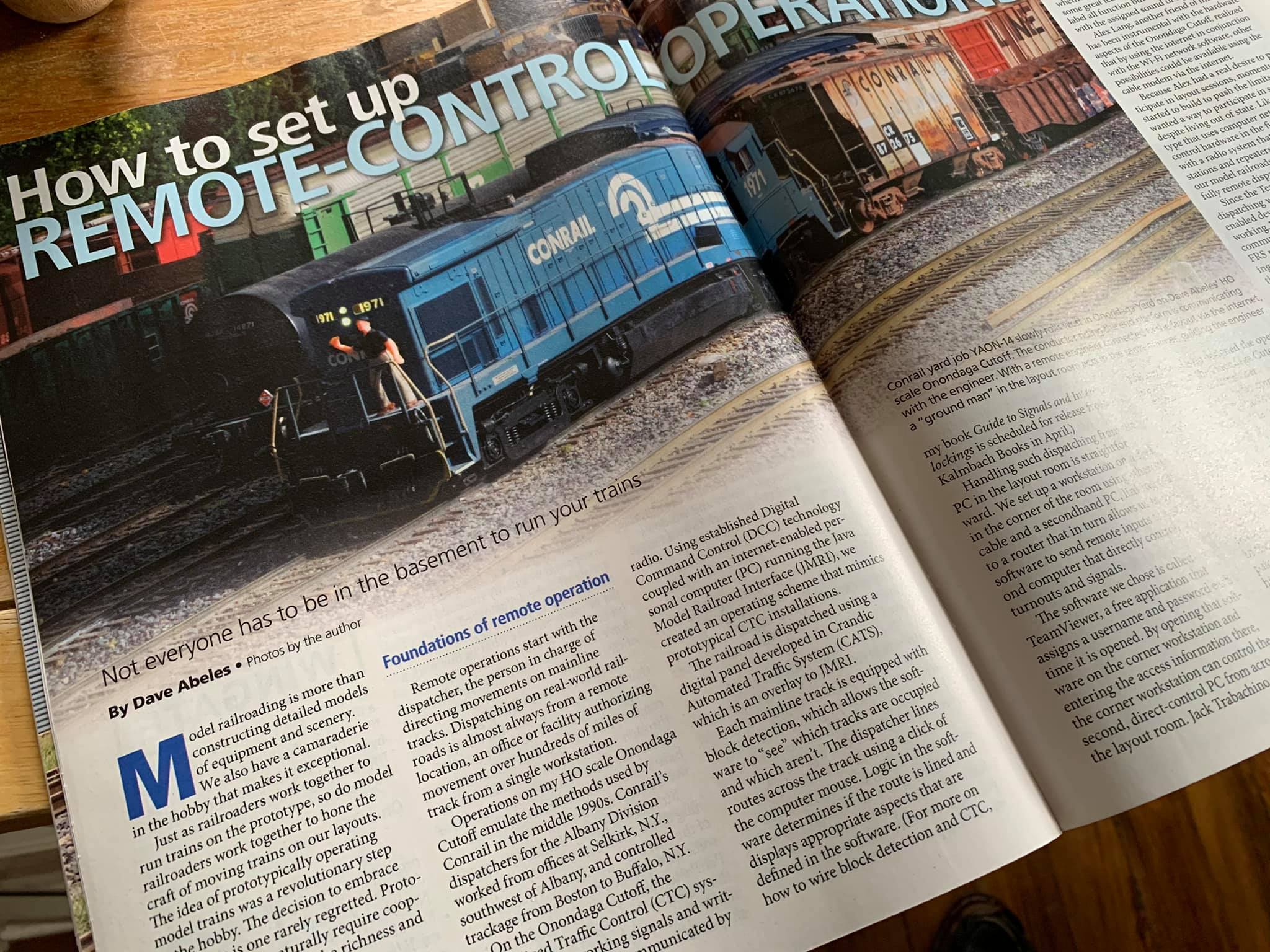 There are three enabling technologies to allow remote control of trains:

Dave had only one other person with him for the op session. The Trainmaster, Dispatcher, and engineers were all remote.

Each engineer had a Teamviewer session to see the dispatcher panel (but not control it). The screen identified where their train was (red, with a symbol label), indicated the routing (green), and they proceeded on signal indication.

As you enter your last block of clearance, you go ahead and slow to a stop. While this may leave you far from the actual signal, it's a tradeoff with not being able to actually see it. (Dave is already thinking ahead to on-board cameras!)

Any model railroad seeking to offer remote operations will need to document how long detection segments are, so an engineer will know as they enter their last block of clearance, is the segment long enough to allow them to run until they clear the previous block, interlocking, etc., without running beyond their signal.

Dave and I both built our dispatcher panels using CATS (Computer Automated Traffic System), which rides on top of JMRI (Java Model Railroad Interface). (There is an online community for users of CATS on groups.io.

Dave's railroad is largely a trunk line with lots of through trains. While local switching would be difficult using this model, as I ran a half dozen trains on the Onondaga, the wheels were turning in my head as to how I might implement this in my operations.

My MIddle Division has two distinctly different operating schemes. The Lewistown yard and the Lewistown and Milroy secondaries are "dark", per the prototype. The authority model is DTC -- commonly referred to as "mother may I" -- with the authority tracking movements on a magnet board. In this case, an electronic magnet board in CATS.

The other half is the four track main line. This has very heavy traffic, with little switching or interaction. The Sequence of Trains illustrates just how busy the main line is. Duel-end run-through staging keeps traffic flowing through the single interlocking plant in the modeled area (LEWIS). I'm using CTC as the authority model here.

While way too modern for my 1950s representation, CATS fills an important need: getting up and running quickly and is easy to use for new users. (Eventually I plan to create a US&S Model 500 machine to be used at the discretion of more experienced operators.)

My initial CATS panel (above) -- which stretches across two large flat panel monitors -- featured the main line CTC across the top, from west (left) to east (right).

Across the bottom was the DTC (dark) secondary lines; designed as an electronic magnet board.

The problem, I realized, was that most remote engineers are not likely to have two large displays at their disposal. They won't need to see the DTC branches, but scrolling back and forth to view the entire CTC territory would be tiring and "get old, fast".

The solution was the "Abeles Adjustment".

It took me about 90 minutes to make the complete change. Turns out I like it better anyway!