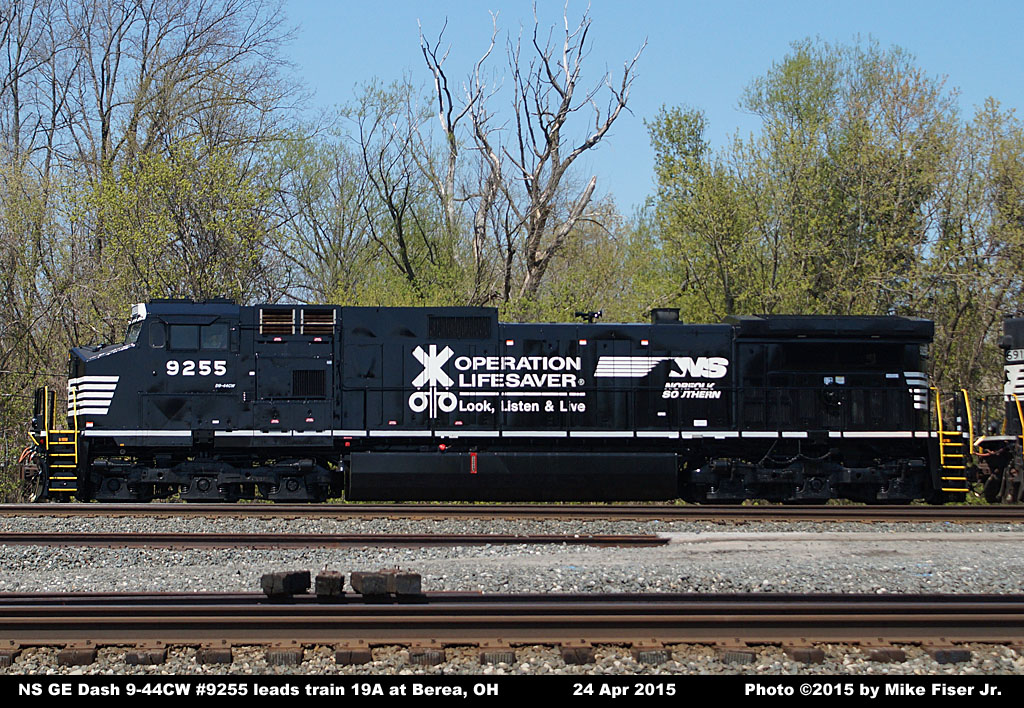 Norfolk Southern has honored its predecessor railroads during 2012, its 30th anniversary year, by painting 20 new locomotives in commemorative schemes that reflect the heritage of those predecessors.

Since the 1820s, hundreds of railroad companies were built, merged, reorganized, and consolidated into what eventually became Norfolk Southern, itself created from the consolidation of Southern Railway (SR) and Norfolk and Western Railway (NW) in 1982. In 1999, Norfolk Southern expanded the scope of its heritage with its acquisition of a portion of Conrail (CR). The heritage locomotives represent most of the railroads that played significant roles in Norfolk Southern's history. The first unit, Conrail 8098, rolled out of Altoona, Pa., March 15, and the final one, Lackawanna 1074, rolled out of Muncie, Ind., on June 27.

Each paint scheme was modified to fit contemporary locomotives while staying as true as possible to the original designs. Norfolk Southern employees in Altoona and Chattanooga, Tenn., painted GE ES44AC locomotives, while the EMD SD70ACe units were painted at Progress Rail Services' facility in Muncie, Ind. The heritage locomotives are now hauling freight across Norfolk Southern's 20,000-mile, 22-state network.

Central of Georgia Railway (SR, GE) was formed in 1833 to connect Macon, Ga., with Savannah, completing a rail link between Chattanooga and the port. It was famed for two passenger trains named after prize-winning race horses, the Nancy Hanks and the Man O’ War.

Central Railroad of New Jersey (CR, EMD) was the first American railroad to have its employees wear uniforms, and in 1892, one of its locomotives set a world speed record of 105 mph.

Delaware, Lackawanna and Western (CR, EMD) was created in 1849 to connect the rich anthracite coalfields of the Lackawanna Valley of Pennsylvania to northern New Jersey. A hurricane in 1955 knocked the railroad out of operation for a month, with the resulting financial difficulties forcing it to merge with the Erie Railroad in 1960 to formthe Erie Lackawanna Railroad.

Erie Railroad (CR, EMD) was key to economic development along the Southern Tier, which includes Binghamton and Elmira, N.Y. In 1851, Secretary of State Daniel Webster, wrapped in a blanket and clutching a bottle of rum, was strapped to a rocking chair on an open flatcar so he could ride the just-completed railroad.

Illinois Terminal Railroad (NW, EMD) began life as the Illinois Traction System in 1896 as an interurban electric railroad in central and southern Illinois. Hit by the Great Depression, it was reorganized as the Illinois Terminal in 1937 and attempted to survive as a passenger railroad until relinquishing that business in 1956, when it was acquired by a consortium of railroads. It was operated as a freight railroad until acquired by NW in 1982.

Interstate Railroad (SR, GE) was incorporated in 1896 to serve southwestern Virginia coalfields. Despite its name, it operated entirely within Virginia. It was acquired by Southern in 1961.

Lehigh Valley Railroad (CR, GE) was built to haul coal, replacing water transport down the Lehigh River, and was known as the Route of the Black Diamond.

Monongahela Railway (CR, GE) was created in 1901 as a joint venture of the Pennsylvania Railroad and the Pittsburgh and Lake Erie Railroad to haul coal out of Pennsylvania and West Virginia, with its base of operations in Brownsville, Penn. The Baltimore and Ohio Railroad acquired a one-third stake in it in 1927. It was merged into Conrail in 1993. The lines of the former Monongahela continue to serve a vital coal-producing region today.

New York Central Railroad (CR, EMD) was organized from 10 roads paralleling the Erie Canal between Albany and Buffalo, N.Y., and became known as the “Water Level Route.” Today, the former NYC line between Cleveland and Chicago is the busiest on the NS system, with more than 100 freight trains daily.

New York, Chicago and St. Louis Railroad(NW, GE) was known commonly as the Nickel Plate Road, a moniker it acquired when the Norwalk (Ohio) Chronicle referred to it in 1881 as “the great New York and St. Louis double track, nickel plated railroad,” supposedly indicative of its solid financial backing.

Pennsylvania Railroad (CR, GE), incorporated in 1846, billed itself as the “Standard Railroad of the World” and was for many years the largest American railroad by tonnage and revenues. PRR opened the Horseshoe Curve railroad engineering marvel; carried President Lincoln to his inauguration; implemented the “line and staff” organizational structure used by business today; built Pennsylvania Station in Manhattan; and electrified the route between New York and Washington, among its many achievements.

Reading Company (CR, EMD) was one of the first railroads built in America and built its fortune hauling coal. It featured the first iron railroad bridge in America.

Savannah & Atlanta Railway (SR, EMD) began life as the Brinson Railway in 1906, slowly expanding from Savannah toward the Northwest. It was consolidated with other small railroads to become the Savannah & Atlanta in 1917. Central of Georgia bought the S&A in 1951.

Southern Railway (GE) originated as the South Carolina Canal and Rail Road Company in 1827. On Christmas Day, 1830, it put into service the nation's first regularly scheduled steam passenger train, "The Best Friend of Charleston." Southern was incorporated in 1894 from the reorganization and consolidation of numerous predecessors, and absorbed another 68 railroad companies over the next six years.

Virginian Railway (NW, EMD) was the only railroad created through the capital and credit of one man, oil magnate Henry Huttleston Rogers. After building a short line, the Deepwater Railway, to haul coal out of West Virginia and then being blocked by the bigger railroads, he created another railroad, the Tidewater Railway, to reach Norfolk, Va., then combined the two into the Virginian in 1907. It was acquired by N&W in 1959.

Wabash Railroad (NW, EMD) was formed in 1877 and served the central U.S. It was acquired by the Pennsylvania Railroad in 1927 and leased to Norfolk & Western in 1960. In 1991, N&W, by then part of Norfolk Southern, purchased the Wabash outright. Made famous by the 1904 song “Wabash Cannonball,” there was in fact no such train by that name until 1949.