As of the outset of TOFC service, existing LCL service 24' to 26' trailers were used. These trailers have smooth or ribbed sides, a rounded front end, and a curb side door. The trailers feature the text "PENNSYLVANIA RAILROAD" running diagonally from lower left to upper right. At each end of the text is a keystone logo with the text "KEYSTONE MERCHANDISE SERVICE" inside. Elsewhere on the trailer sides is the text "DOOR TO DOOR SERVICE" and "PICKUP AND DELIVERY". By the early 1950's, over 8,600 tractors and trailers are in service. 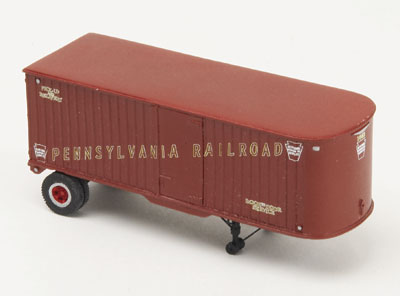 Also in 1954, the Pennsy leased 150 new 30' Fruehauf trailers for the TOFC service. Lettering was the same, but the text inside the keystone logo is replaced by "PRR". Like earlier trailers, they had one axle.

In July 2005, Classic Metal Works released Pennsy 32' trailers. It is a single axle trailer and, lacking photographs of the 30' trailer, may be a good stand-in.

In 2004, Classic Metal Works released reasonably accurate 32' trailers in many of these carrier's names. 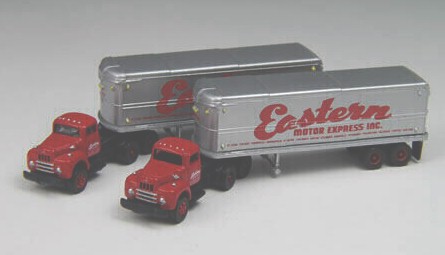 In 1955, the Pennsy ordered 32' dual-axle trailers from Freuhauf and Trailmobile.

In July 2005, Classic Metal Works released single-axle 32' trailers. With a decent paint job, they are a respectable stand-in. They also released IH tractors in PRR livery.