Very large coal and building supplies dealer. Originally located a few blocks west where The Hoffman Company is located in the 1950s. Moved sometime between 1910 and 1923 (see below).

Dan Cupper recollects that there were below-grade bins for coal receipt that were covered with steel panels when not in use. Underground conveyors fed the coal into the storage shed. There was a vertical-slat wood fence around the entire business and it was between the tracks and the coal shed. Dan does not know if the coal shed had stalls for various grades of coal or not.

On the south side of the right-of-way, opposite the Chestnut Street passenger station, there were a number of entities that lacked private sidings but may have used nearby team tracks.

Present in 1957 Penn Pilot aerial photo. This building remained in 2016.

FaceBook discussion initially suggested that the Montgomery Ward warehouse became Coble's Meat Warehouse. Dan Cupper disagrees, recalling Coble's was a single floor structure. Deb Coble (FaceBook) wrote "it became a Lewistown Frozen Foods when my husbands grandfather bought the building around 1950. It later became Coble’s Foods when my husband’s father took over the business and then my husband owned and managed it after that."

The 1910 Sanborn map shows this structure as a former electric generating plant, as vacant. The building remains in the 1928 Sanborn map, shown as a warehouse.

Present in 1957 Penn Pilot aerial photo. By 2016, it had long-since been replaced by another building.

The 1910 Sanborn shows this location as an empty lot. The 1928 Sanborn map, with 1947 corrections (see above), shows a structure labeled "building materials warehouse".

The structure remains in 2016 and still shows itself as part of The Hoffman Company.

Shown as M. W. Brandt on 1910 Sanborn map (right). Brandt moved a few blocks east sometime between 1910 and 1923 (see above). Dealer of coal and lumber. Coal trestle facing freight station. Shown as Hoffman Company on 1928 Sanborn map (see below). It appears that when the Penn Edison siding was removed next door, The Hoffman Company redesigned their one building and created a second siding into their area.

Dan Cupper recalls that the trestle was open on both sides as you could see "through" it from the yard.

Present in 1957 Penn Pilot aerial photo. In the 2016 aerial image, below, the structure along the bottom appears to be part of the original structure.

In 1959, The Texas Company changed its name to Texaco.

Shown as H. C. Jackson Supply Co. on 1910 Sanborn map, as a dealer of coal, wood and feed. Shown on the 1928 Sanborn map, with 1947 corrections, as East Penn Gas Company, dealing in liquid gas. The aerial image of 1938 shows that the business had already converted to gas, no longer selling coal.

The gas company relocated to Burnham circa 1948-50. 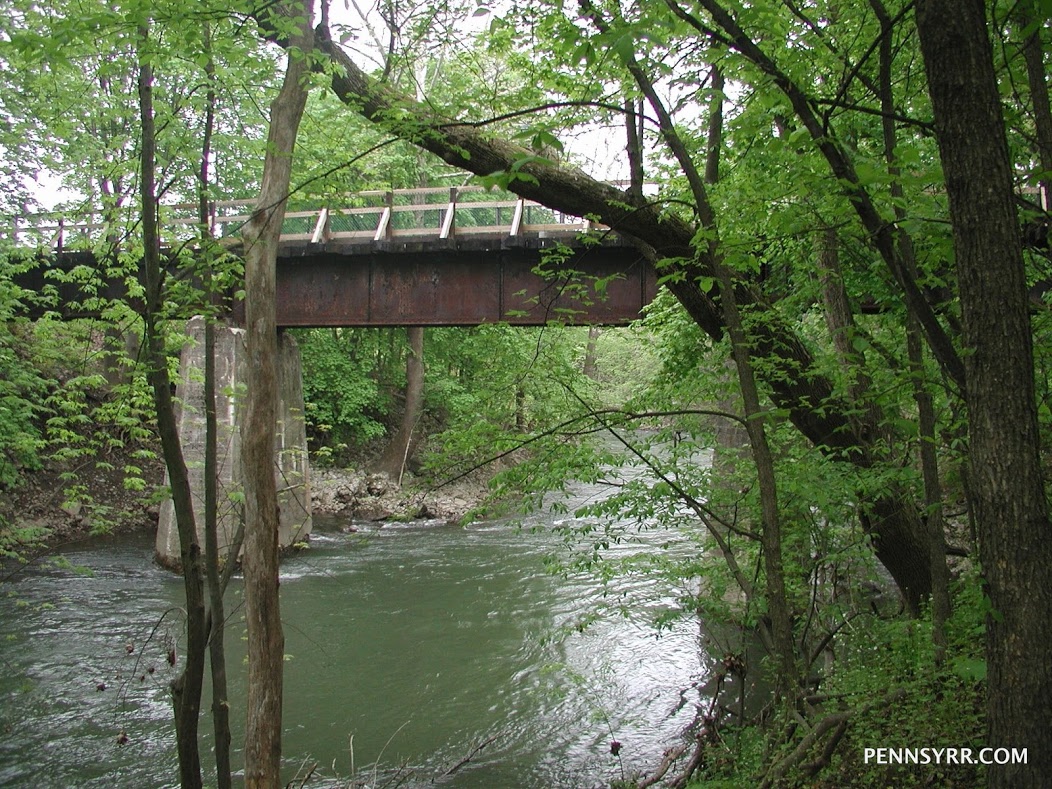 Paul Fegley recalls that Joseph Krentzman & Sons was a scrap business in Lewistown, forced to move after the 1972 Agnes flood. At one time they absorbed the Juniata Iron & Steel Co. (below).

John Snyder also relates that Krentzman was a junk dealer.

Incorporated in 1903 as the Heverly Manufacturing & Storage Company. Manufactured artificial ice, provided cold storage, and sold coal and other supplies. It is known that cold storage included apples and eggs. Ice was manufactured via an ammonia compressor (Common Ground, Summer 2019).

The company was reorganized in 1910 and renamed Lewistown Ice & Storage Company.

The company was owned and operated by WIlliam Riddleberer III from 1945 through 1975. The plant closed in the early 1990s.

Shown as Heverly Mfg., Storage & Supply Co. on 1910 Sanborn map. Storage structure is indicated. Shown on the 1928 Sanborn map, with 1947 corrections (see below).

The neighboring Lewistown Dry Cleaning & Laundry may have received coal on this siding.

The son of the owner, Bill Riddleberger (FaceBook), bagged ice as a youth. He wrote "All ice was taken to places  by trucks. They had a lot of square footage for apple storage in main section; good distribution center for food to area restaurants. The  rails were used by the junk yard behind the ice plant.  Rails only used about twice a week."

Paul Fegley indicates this was a junk dealer and metal scrapper. He provided a 1957 newspaper ad that indicated they were at the "West end of Charles Street".

David Goehring recalls Sitkin's operation was still active in 1963-64 when he was working in Lewistown.

A 1995 document by the Pennsylvania Department of Transportion -- regarding Route 22 improvements -- provides the following citation... "Located near the gas plant, the Sitkin/Penn Electric/Penn Fuel Gas sites disposed shredded rubber on site."

Shown on the 1928 Sanborn map, with 1947 corrections. Although the Sanborn map does not indicate so, this entity did have a dedicated siding which is visible in the 1938 and 1957 Penn Pilot aerial images.

This was a manufactured gas plant. Coal was gasified by heating the coal in enclosed ovens with an oxygen-poor atmosphere. The fuel gases generated were mixtures of many chemical substances, including hydrogen, methane, carbon monoxide and ethylene, and could be burnt for heating and lighting purposes. Coal gas, for example, also contains significant quantities of unwanted sulfur and ammonia compounds, as well as heavy hydrocarbons, and so the manufactured fuel gases needed to be purified before they could be used.

Gas would be collected and stored in telesoping tanks called "gasholders".

A 1995 document by the Pennsylvania Department of Transportion -- regarding Route 22 improvements -- provides the following citation... "Processing tanks remain on site at the Lewistown Gas Plant, a former coal tar plant."

Between Overhead Door and the former silk mill building are several entities that remain in 2019 and were likely rail served... a ramp for unloading, two warehouses with docks, and an oil dealer.

Shown as Susquehanna Silk Mill on the 1910 Sanborn map. The 1928 Sanborn map, with 1947 corrections, indicates "Various Manufacturers and Storage Occupancies".

Based on the image below from a marketing brochure, one of the tenants must have been the Cluett, Peabody & Co. John Snyder relates that they manufactured Arrow shirts (104 E. Fleming Street - 1970). David Goehring recalls Arrow's operation was very active in 1963-64 when he was working in Lewistown.