Nine A-B-A locomotives, class BP3, later changed to BP20, were ordered in June of 1947, with delivery completed by November, 1948. These passenger sharks were unique to the PRR. The 80' burley beasts attracted no buyers outside the Pennsy.

The erecting shops at Eddystone, Pa. sold most of their road diesel product to either the B&O, NYC or PRR. The Pennsy management ordered motive power from all makers to give them opportunity to compare all products. The early years of diesel passenger service were not without tribulations.

The Pennsy pressed the BP20's into service on East-West "Blue Ribbon" trains. Mechanical problems, however, plagued the BP20's. Complaints, road failures, service disruptions all led to the BP20's being pulled off the "Blue Ribbon" trains. An investment of $5-million in the 27 units (18 A-units and 9 B-units) 5770-5787A and 5770B-5786B (even numbered for B units) was involved and those early days tarnished the Pennsy reputation for reliability. On time performance (something Philly took very seriously) suffered. Public image and on-time performance could not be tarnished nor would management tolerate such problems. Heads would roll if the Broadway, Trailblazer, General, Admiral, Spirit of St. Louis, or Liberty Limited, etc. were not on time.

Fortunately, the vast PRR systemhad an abundance of scattered terminals from which it could call for help. Never the less, use of protection power (standby motive power for emergency use) was not an acceptable alternative.

The BP20's were pulled off the best trains with tight schedules. They were relegated to trains such as the Golden Triangle, Steeler, The Union, The Fort Hayes, The Fort Pitt, and other daylight intra-city trains.

From 1949 to 1951, the BP20's handled mail and railway express trains. REX in the 40's and 50's was a big customer of the PRR. The Pittsburgh post office and REX terminal produced over 200 car loads daily for the PRR. The Pennsy ran the sharks on mail and express trains and the many passenger extras from 1950 to 1954. The Korean Conflict saved the passenger sharks from a questionable fate with the surge in passenger business during those early 1950's.

These units were assigned to the Pittsburgh Division and used in freight transfer service between Shire Oaks, Pitcairn, Conway, and Scully. They worked coal drags to Ashtabula, Cleveland, Columbus, and Dennison, Ohio. The 8 regeared BF16z unit were coupled with other freight BF15 and BF16 sharks. A photo of such a lashup appears in this feature.

A couple BP20's were used briefly for commuter service between Pittsburgh and Derry but the trial was terminated because of visibility complains by the crews. The crews had strong feelings about their Alco RS-3's bought equipped for specific service on the commuter trains in the Pittsburgh area. Not only the problem of visibility but the fact that they units had to be turned on the table at Pittsburgh and at Derry made for extra work. The Alco RS-3's were able to operate in either direction without turning. Many a commuter train returned to the city with its power running in reverse or pushing on the rear. These were mainly late evening trains that returned to the station where they originated early morning runs around four to five a.m. The railroad saw the opportunity to further reduce its steam hauled trains on the New York & Long Branch commuter run with these surplus beasts. The BP20's ran out their days on the Long Branch trains.

As a teenager who literally spent weekends at trackside, I recall two odd observations. On one July weekend in 1954 an A-B set worked the eastbound hump filling in for another Baldwin product that became victim to engine failure. On another occasion, a lone BF-16z was power for the wreck train called to upright cars in the Wilkinsburg Yard east of Pittsburgh. There were more than likely other such unique assignments but lack of independent transportation prevented me from travelling far. When I had the money I used to take two trolleys out to Pitcairn from my home in East Liberty. When I didn't have the fare, I used to leg power peddling my bike the ten miles to Spring Hill switchman's shanty at Pitcairn's west end. in a future article, I'll tell you about the time the train crew put my bike on the caboose and took me with them to Jack's Run.

If you notice in the photos, 5770 and 5771 differ slightly from all others in that the first air intake is rectangular in shape. Subsequent units have a piece of sheet metal shaped like an arch. Likewise, the rear air intake has been changed. 5770B is similar to its original mates.

I previously published in RAILS NORTHEAST, the very first paint scheme of the BP20 with the keystone herald within the gold circle was behind the cab door and the pin stripes running from the circle keystone all the way to the rear. I saw no need to reprint it in this issue and therefore have not included it with the three different schemes wore by the BP20's.

A few notes that might be of interest: Originally the horn was located at the center of the roof near the first engine exhaust. Shortly after their delivery, the units had the horn moved over the engineer's cab windshield. Some units had horn modifications with the installation of new air horns. Other modifications include the addition of safety ladders on the nose for servicing personnel, large number boards, and the addition of air intakes on the nose.

For those planning to model Baldwin "Passenger Sharks", the following information may be helpful.

Please note that the drawings are at a higher than usual resolution (150 dpi) for web distribution and many browsers may not be able to display them. Some are also large in size...11 by 17 inches. If your browser cannot display the file, hold the mouse button down on the link and you should get a "pop-up" menu with an option to download the file to disk. After doing so, your browser may then be able to view the file. Better yet, open the file in Adobe PhotoShopor place it into a page layout program such as Adobe PageMaker. Also note that the original documents were not very clear which causes the scans to appear to be of poor quality, which they are not.

Exterior of "A" Unit - Fills and Drains - Exterior elevations of "A" units with drains, fills, vents and other details labeled. Source: Pennsy Journal, V.1 #1. 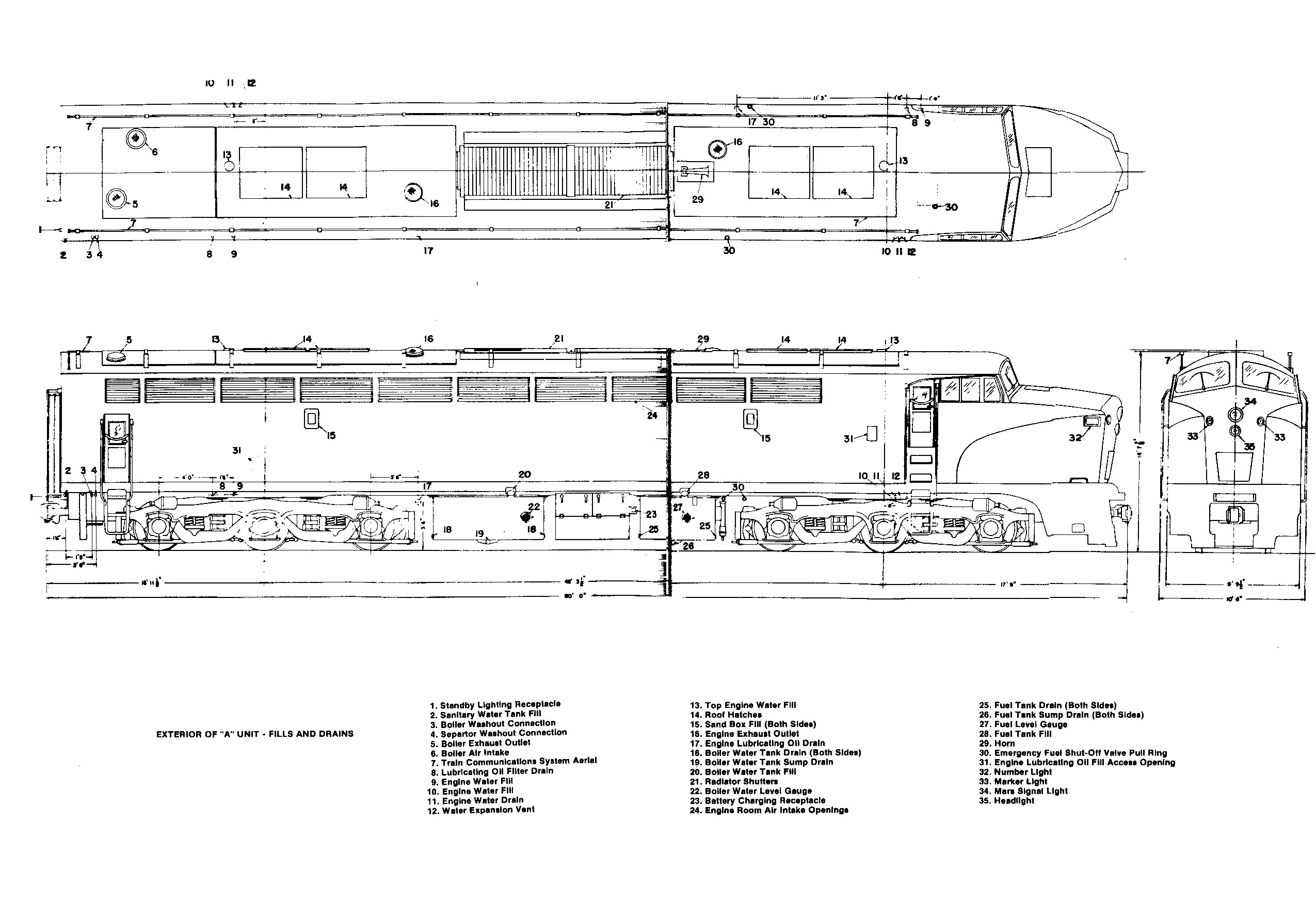 Exterior of "B" Unit - Fills and Drains - Exterior elevations of "B" units with drains, fills, vents and other details labeled. Source: Pennsy Journal, V.1 #1. 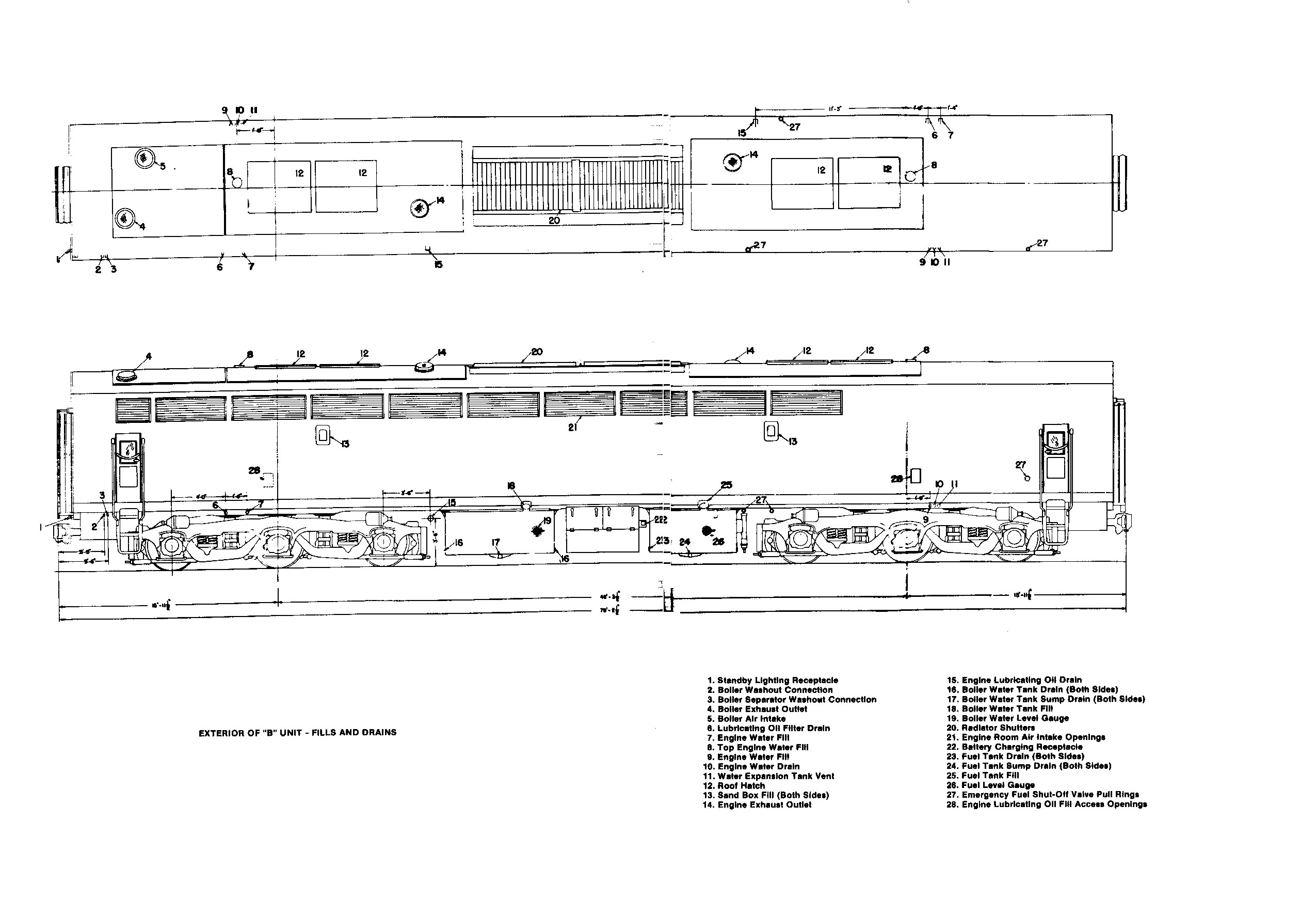 Arrangement of Equipment "A" Unit - Interior elevation and floor plan of "A" units with equipment labeled. Source: Pennsy Journal, V.1 #1. 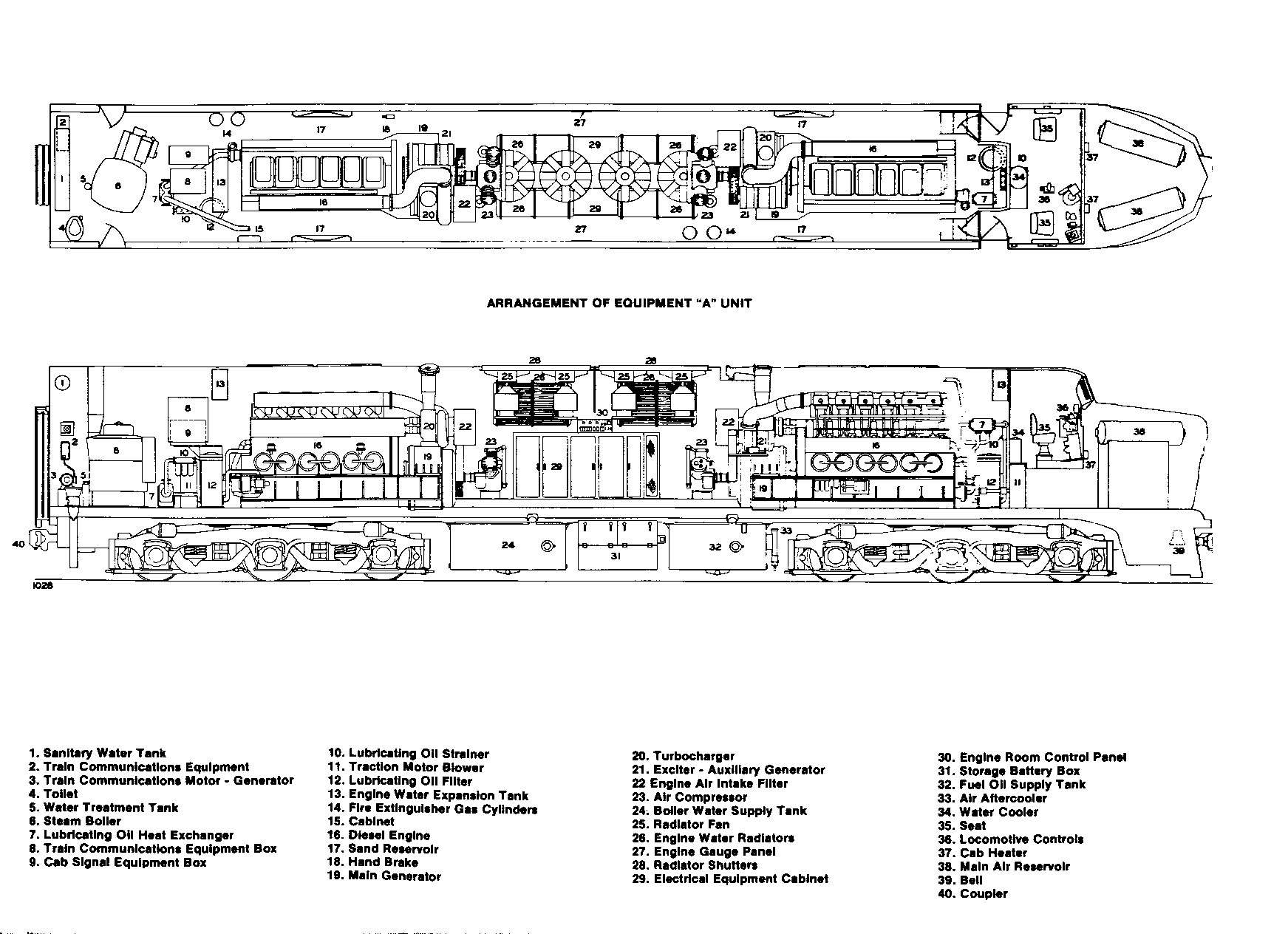 Arrangement of Equipment "B" Unit - Interior elevation and floor plan of "B" units with equipment labeled. Source: Pennsy Journal, V.1 #1. 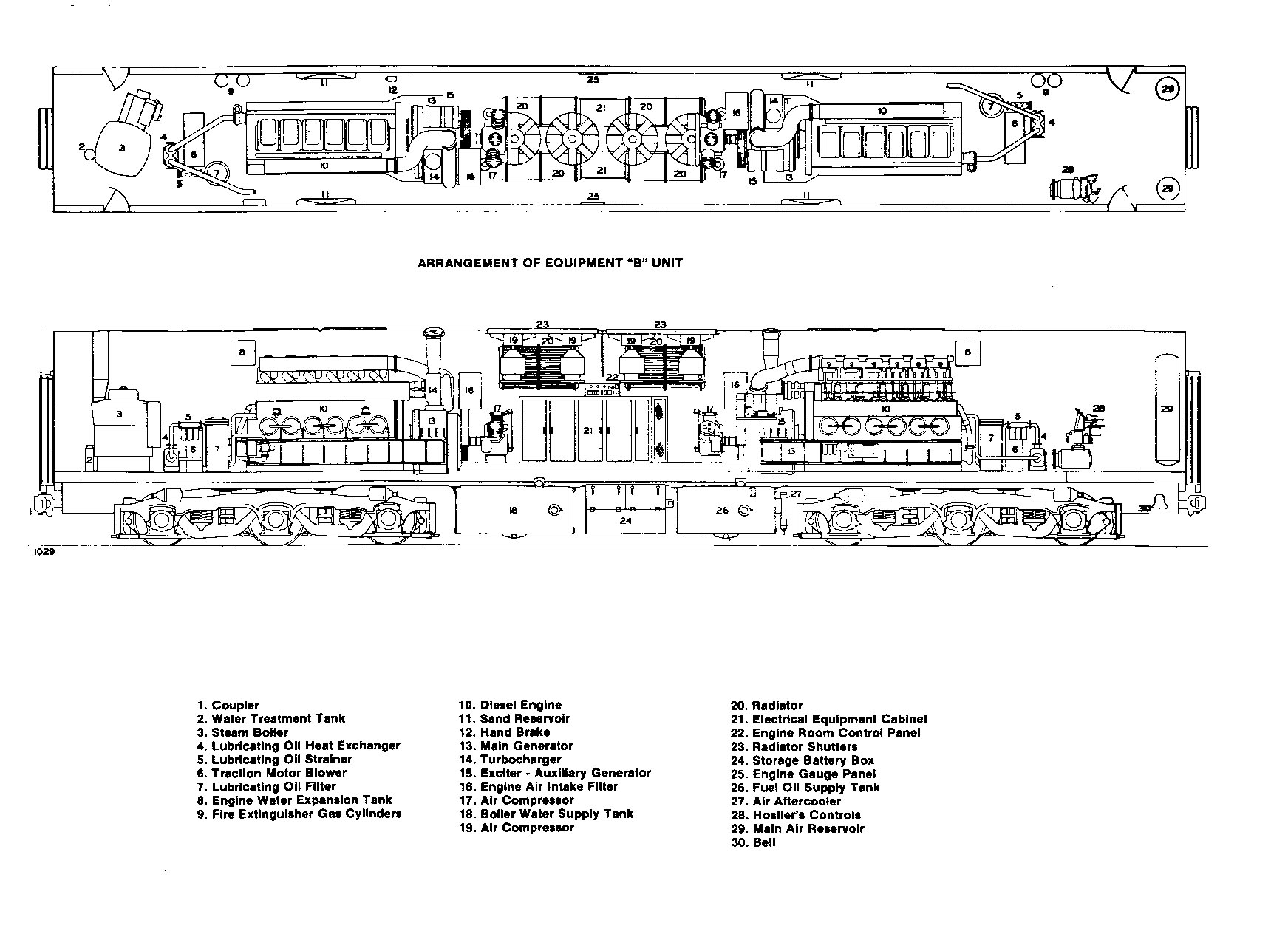 Scheme 1: Photo of "Passenger shark 5784 on the point of a eastbound passenger train stopped at either Ft. Wayne, Ind. or Englewood, Ill. Unit is in its original pristine condition. The painting diagram for this scheme has not been included with this feature since it has already been printed in Rails Northeast several years ago. 5774 is representative of how the Baldwin passenger sharks were delivered in appearance and application of lettering and painting details. Photo from the editor's collection." Source: Pennsy Journal, V.1 #1. 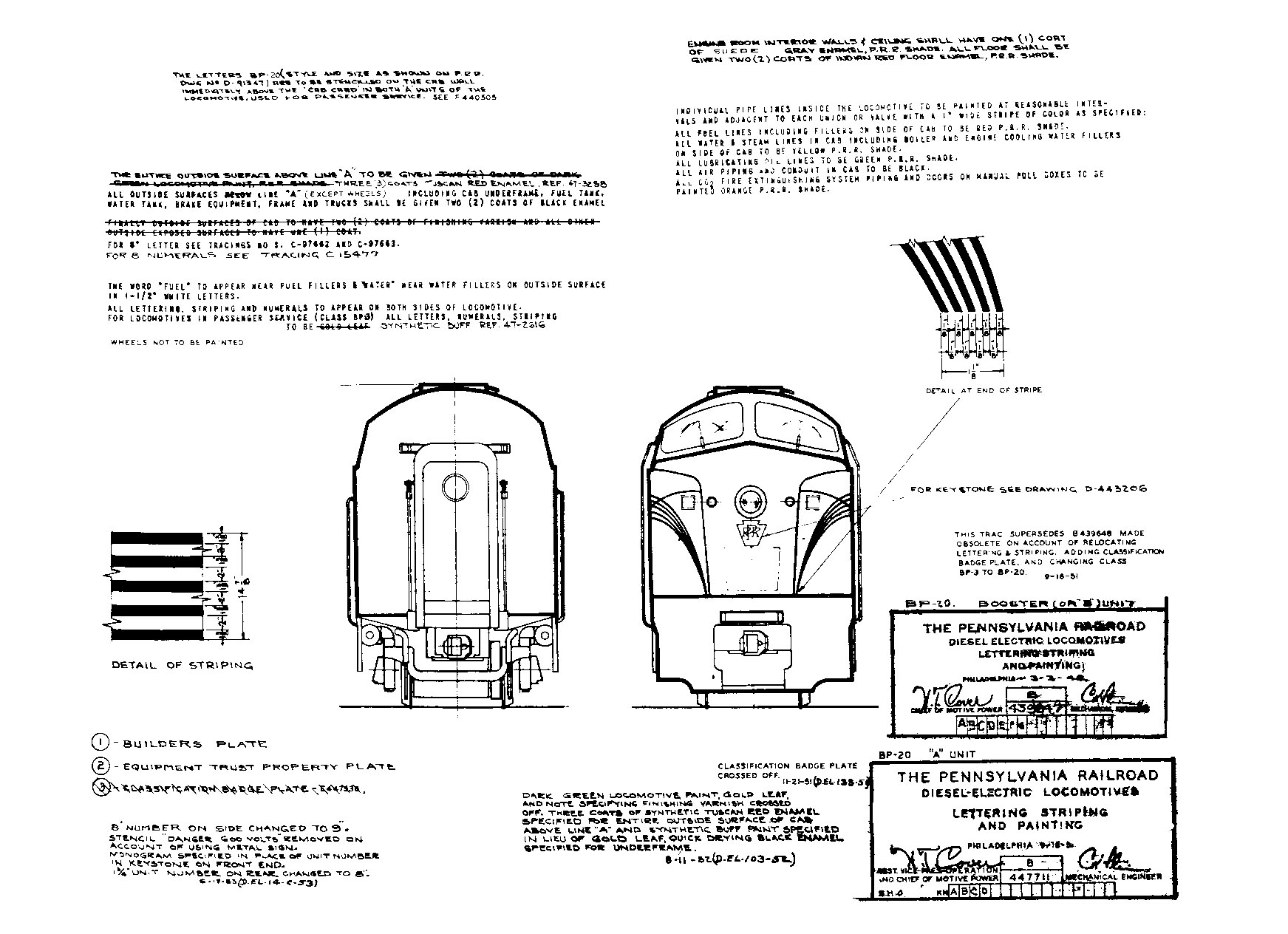 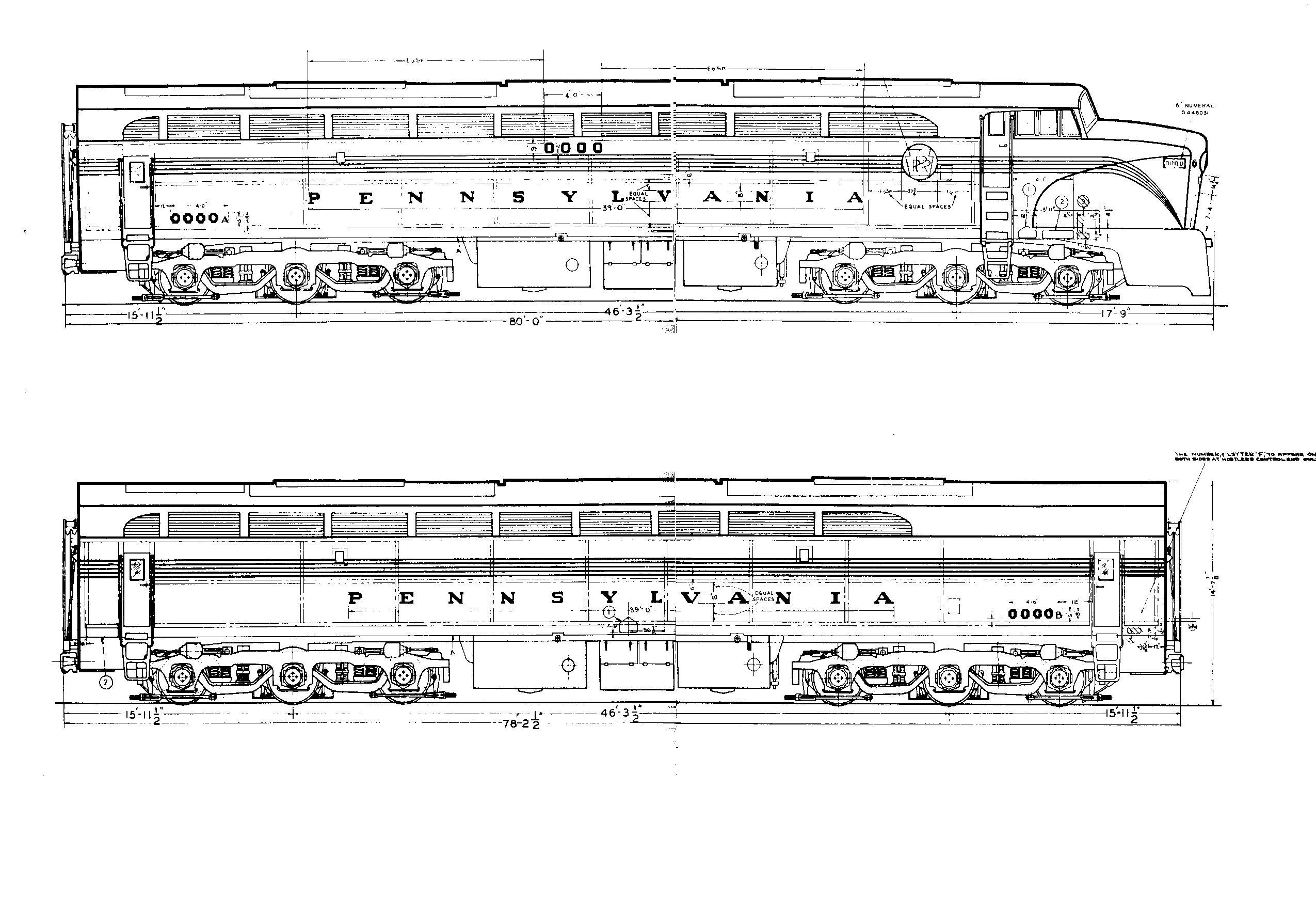 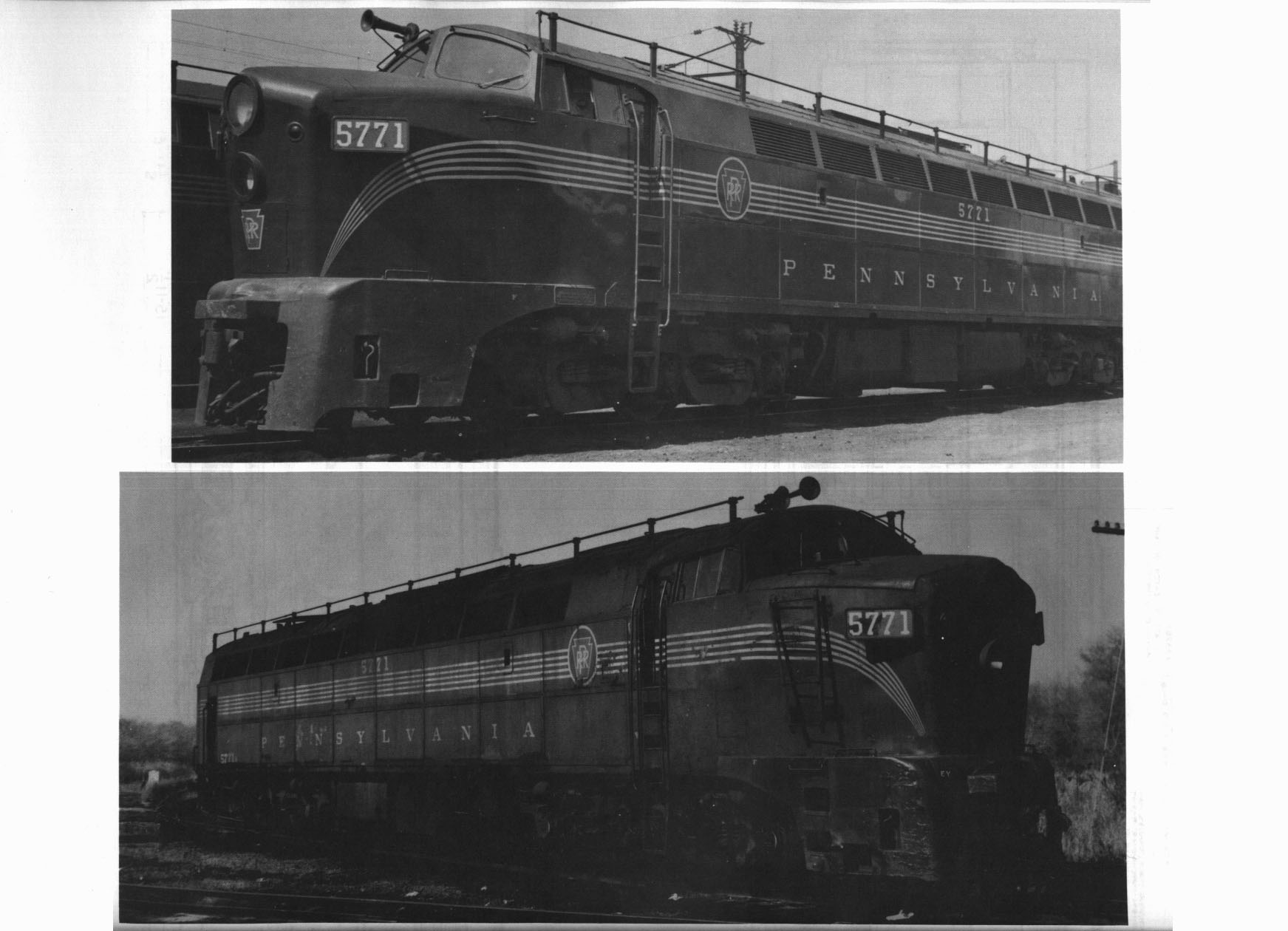 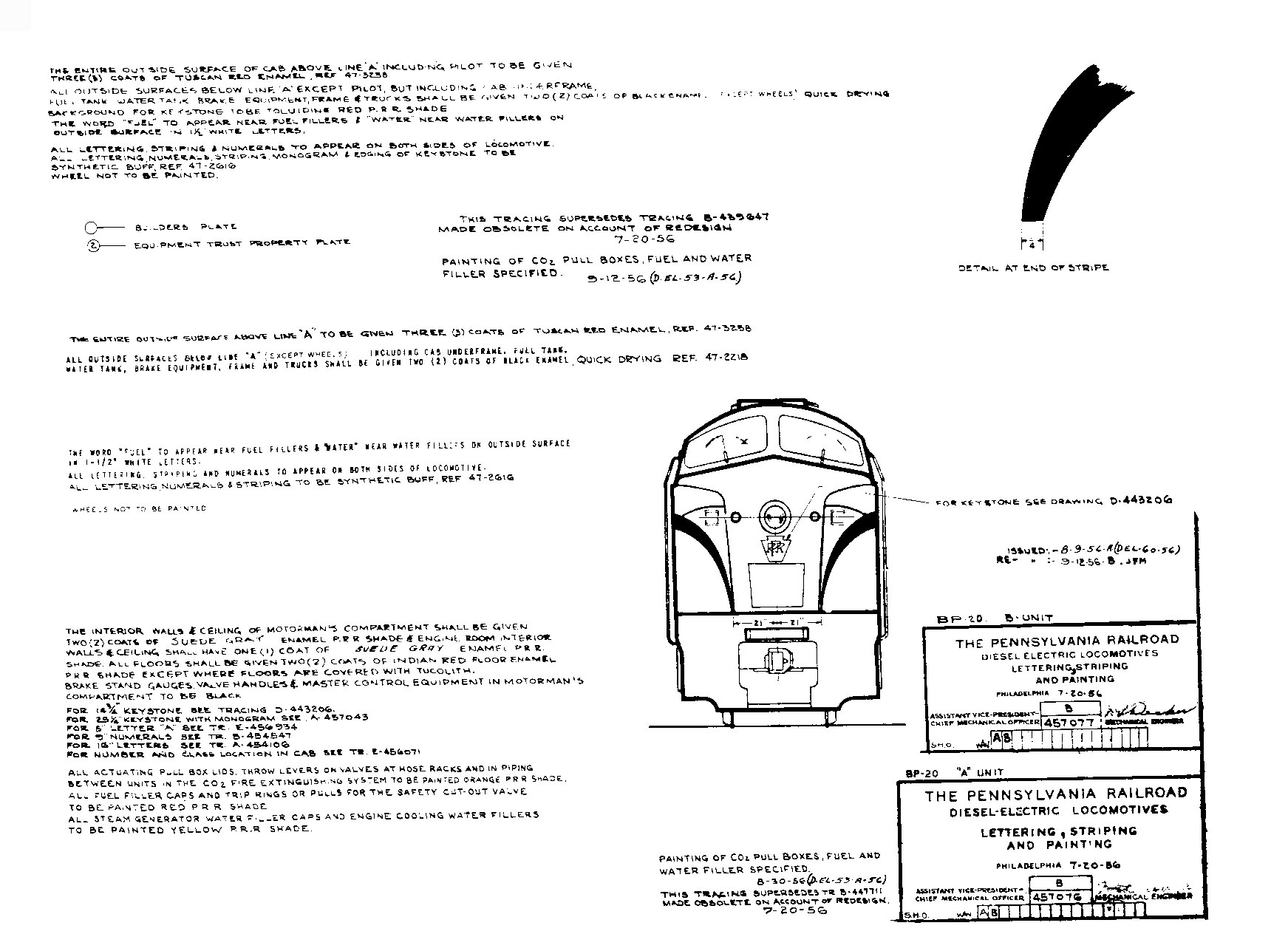 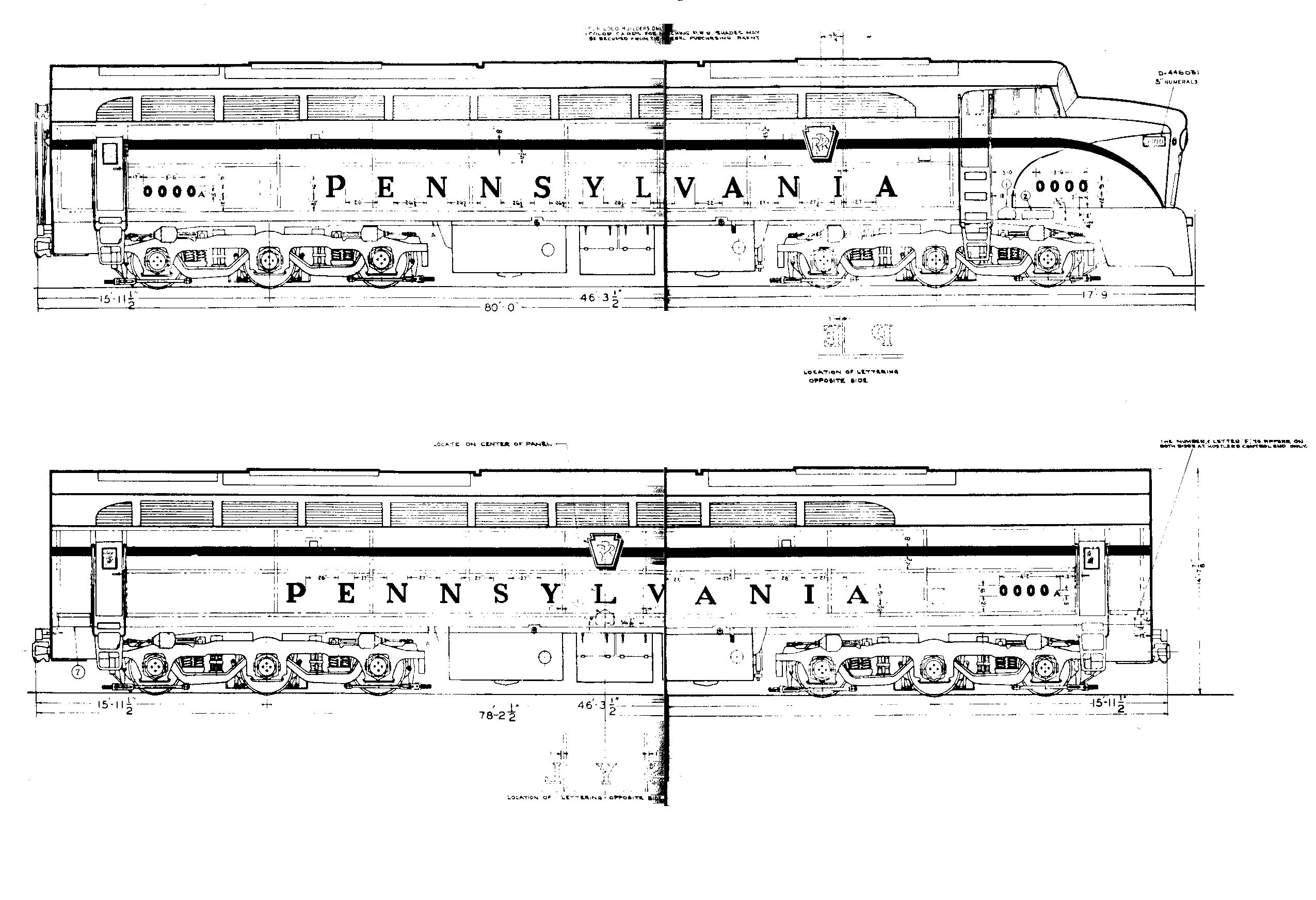 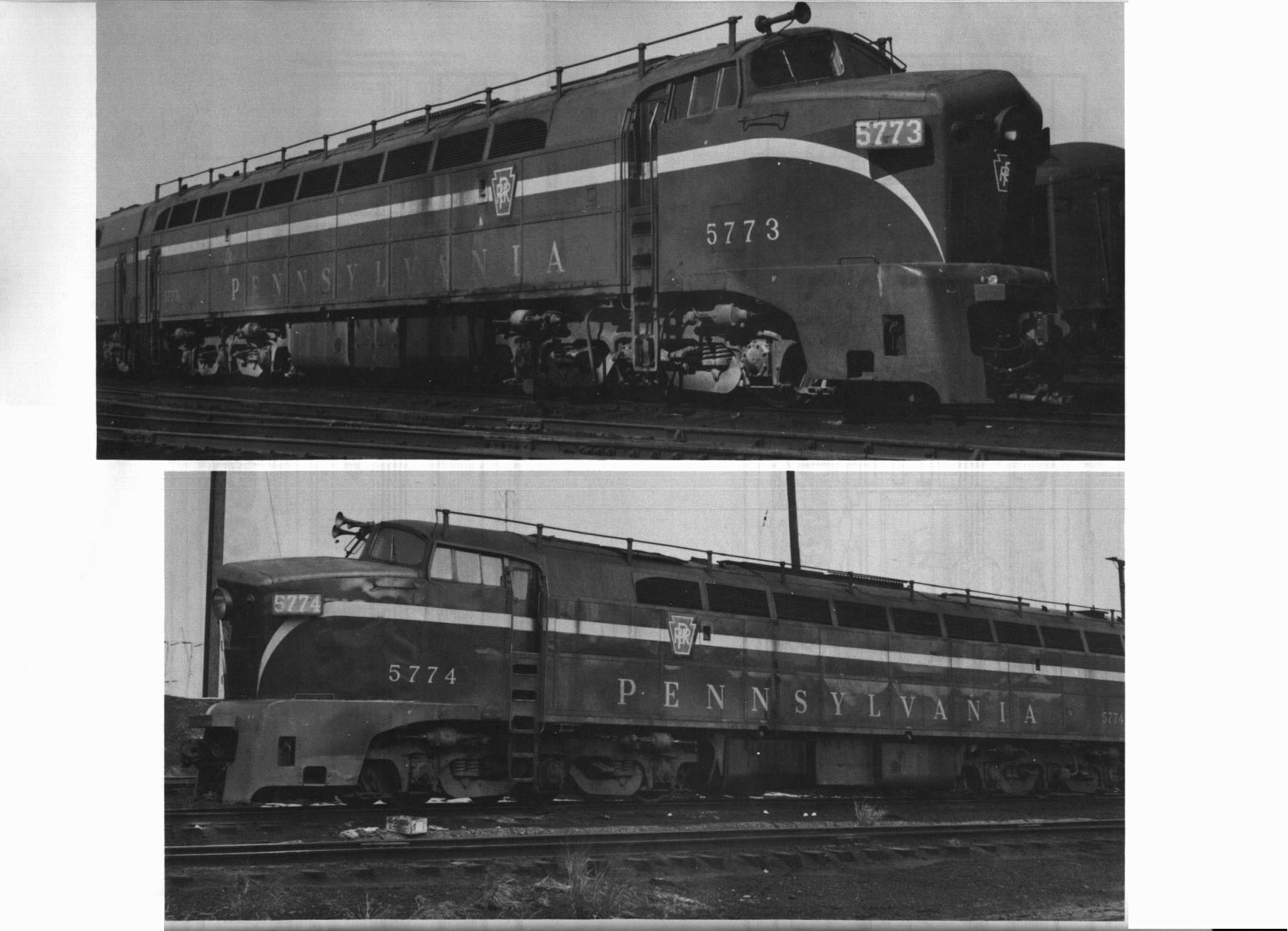 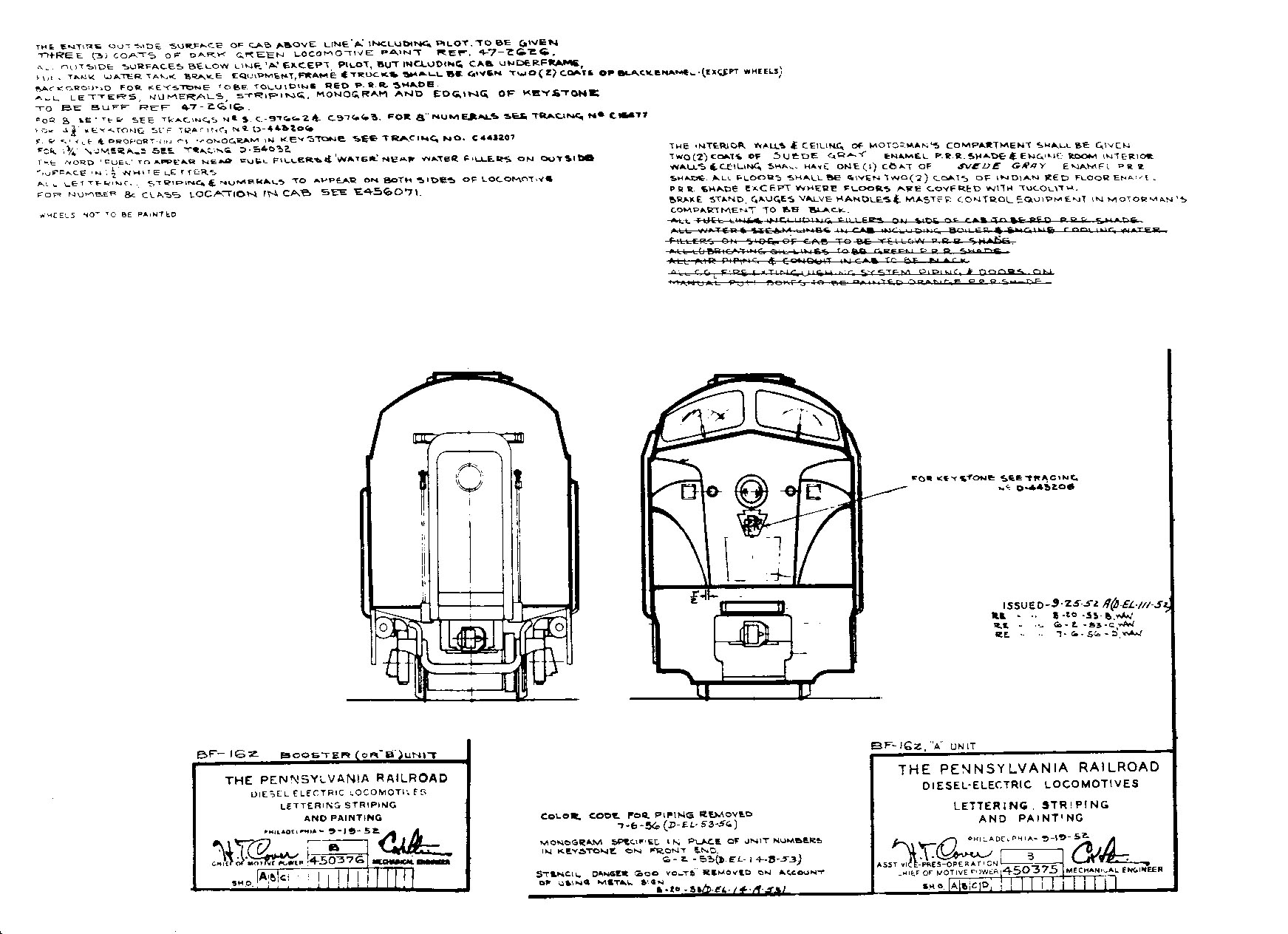 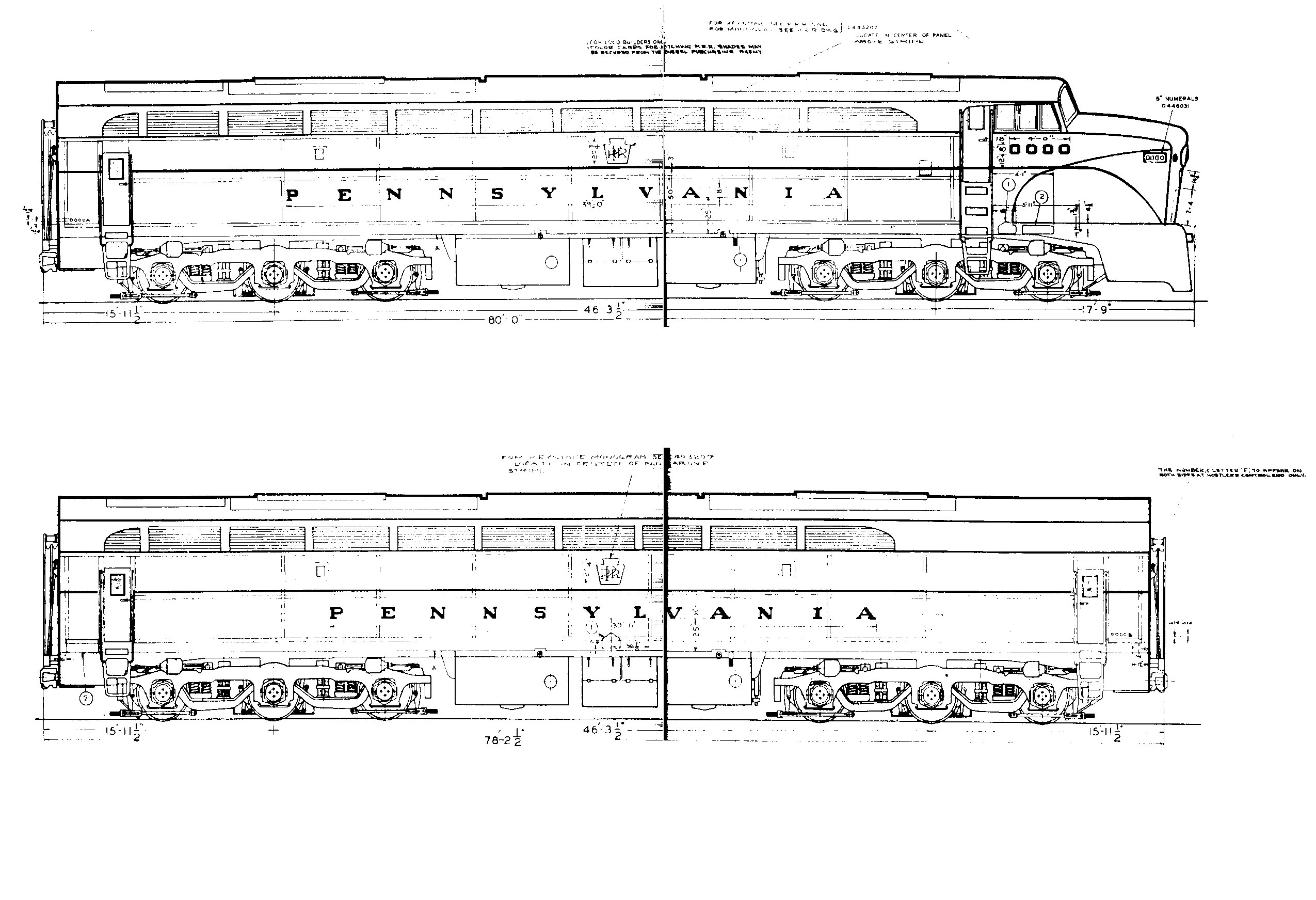 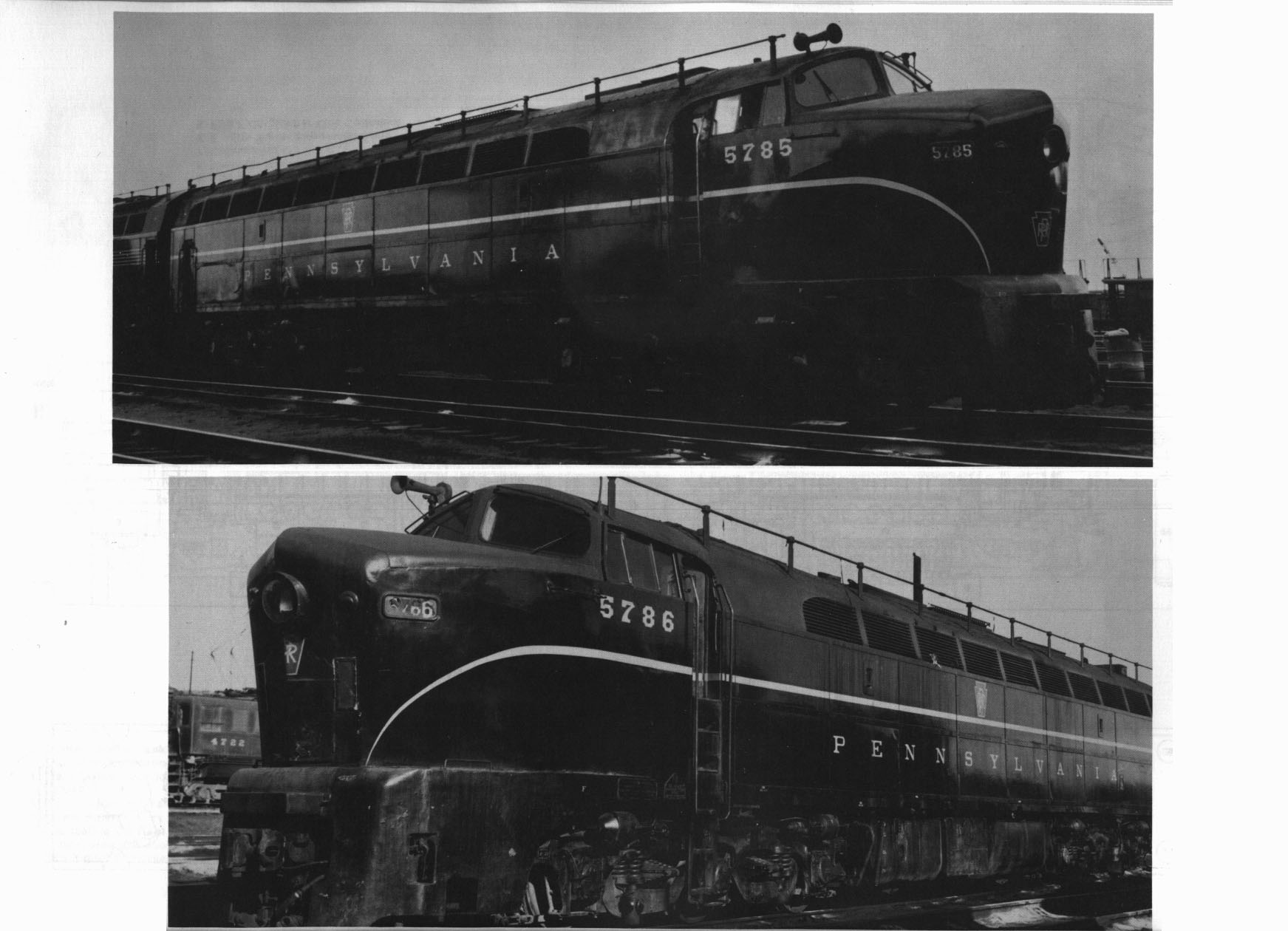