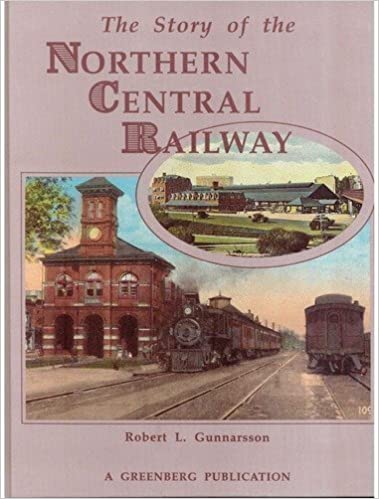 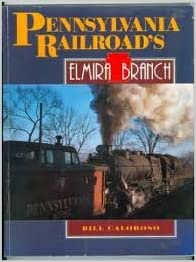 The Pennsylvania Railroad's Northern Central line was double-tracked and equipped with block signals between Baltimore and Harrisburg by World War I. The line carried heavy passenger and freight traffic until the 1950s. On-line freight included flour, paper, milk, farm products, coal, and less-than-carload shipments between such settlements as White Hall, Parkton, Bentley Springs, Lutherville, and the city of Baltimore. Local commuter service, referred to as the "Parkton local", operated over the 28 miles between Calvert Station in Baltimore and Parkton, Maryland. Long distance passenger trains equipped with sleepers and dining cars were also operated by the PRR over the line from Baltimore Penn Station to Buffalo, Toronto, Chicago, Illinois, and St. Louis, Missouri, with through-sleeping car service as far as Houston, Texas. Much of the PRR through freight service to points west was routed via its electrified Port Road Branch along the Susquehanna River to Enola Yard in Harrisburg, however, instead of the Northern Central line.

With the decline in rail passenger and freight service in the 1950s, accelerated by completion of the Baltimore-Harrisburg Expressway (I-83), the "Parkton locals" were dropped in 1959 and the line was reduced from double-track to single-track. Some long-distance trains, such as the General to Chicago and the Buffalo Day Express, continued to operate until the late 1960s. In 1972, when Hurricane Agnes caused bridge damage and washouts along the line, it ceased operations completely. One of the oldest rail lines in the country, it had run for a total of 134 years.

In the 1911 the NCR was fully absorbed into the PRR. Its track segments were cut up and assigned to various PRR divisions. As of 1945 the divisions were as follows:

Of the construction of the Northern Central Railway... 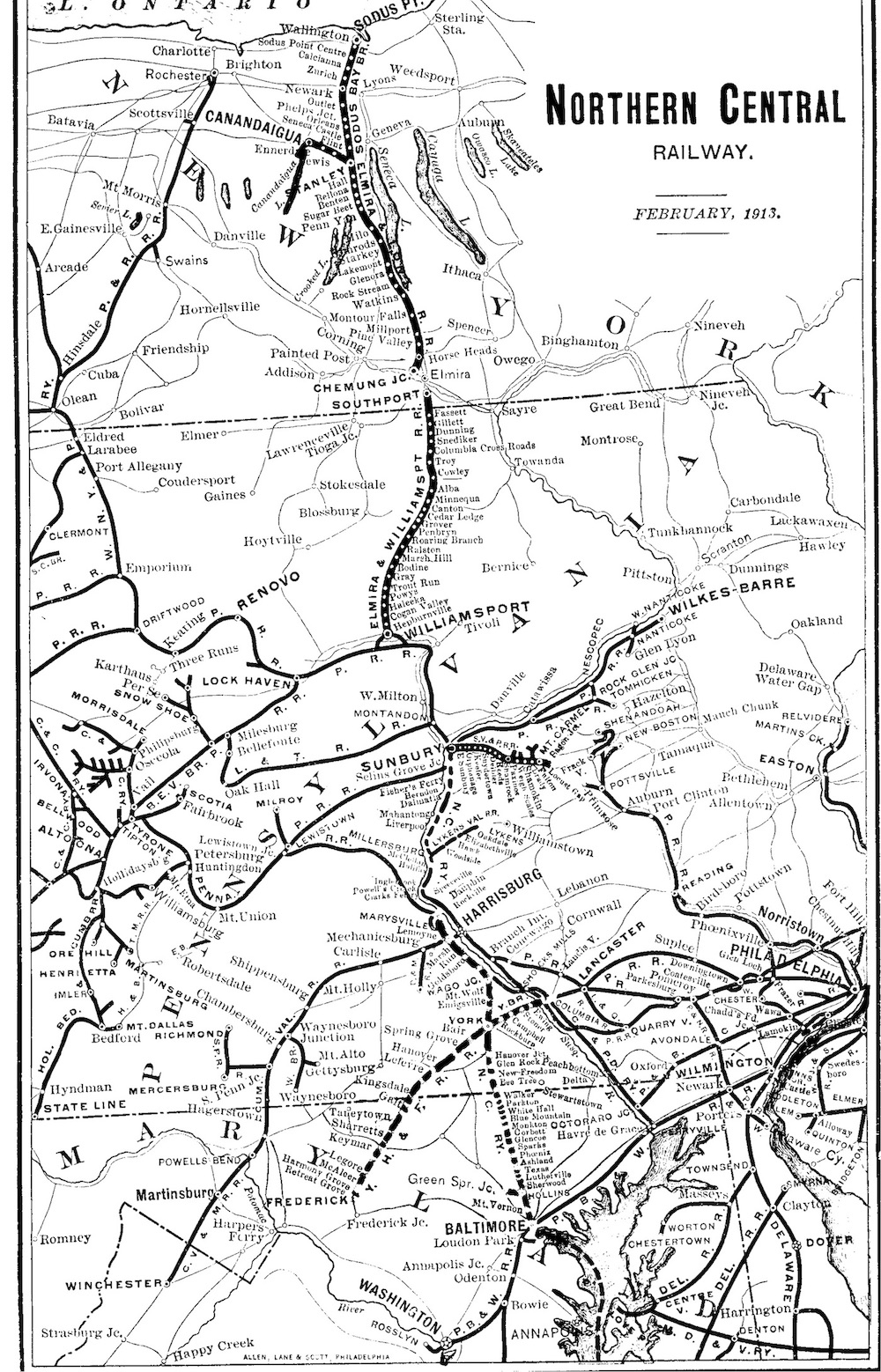 The Northern Central Railway Co. was constructed by predecessor companies from Baltimore, Maryland, as far as Lemoyne, Pennsylvania, opposite Harrisburg, as follows:

The Susquehanna Railroad Co. was incorporated in 1851 to build a railroad from Lemoyne to Sunbury, Pennsylvania, and started construction in 1853, but was suspended in 1854 when this company, together with the three other companies named above, were consolidated to form The Northern Central Railway Company.

The Northern Central Railway Company purchased control of the stock of the Chemung and the Elmira, Jefferson & Canandaigua railroad companies in 1872 and, thereafter, operated these lines under lease until 1886 when they and the Sodus Bay & Southern Railroad Company, mentioned below, which road came under control of The Northern Central Railway Company in 1884, were consolidated to form the Elmira & Lake Ontario Railroad Company. The line of the Sodus Bay & Southern Railroad Co. from Stanley to Sodus Point was completed by one of its predecessor companies in 1873.

The Shamokin Valley & Pottsville Railroad was leased by The Northern Central Railway Company from February 27, 1863, and operated as part of its system.

December 31, 1945, the railroad owned by the company consisted of 143.30 miles of line, 45.07 miles of which were in Maryland and 98.23 miles in Pennsylvania. There were 135.86 miles of second track, 17.58 miles of third track, 17.64 miles of fourth track, and 192.36 miles of side tracks, making a total length of wholly owned tracks of 506.74 miles. In addition the company owned an interest in the tracks in Enola, Orangeville, and Northumberland yards. 82.92 miles of the company's tracks were electrified. The termini are Baltimore, Maryland, and Marysville, Dauphin, and Sunbury, Pennsylvania, with a branch at Hollins to Green Spring Junction, Maryland.

The railroad of this company is operated by The Pennsylvania Railroad Company, lessee, under lease dated July 29, 1914, retroactive to January 1, 1911. The yearly rental paid is 8% on the capital stock ($31,433,750), interest on the debt, and organizational expenses.

When this company began operations, its line was single-track throughout. There were but few passing sidings, yard tracks and station buildings. The track was laid with light iron rails and practically no ballast. The bridges were of wood. The need for improving the track and for additional facilities soon became pressing. The more important items provided through the years are shown below.

Other Railroads Operated by this Company

Coverdale and Colpitts, The Pennsylvania Railroad -- Corporate, Financial and Construction History of Lines Owned, Operated and Controlled to December 31, 1945.