The hood unit configuration of the RS-1 pioneered the road switcher type of diesel locomotive, beginning the move away from the carbody units which were the standard design for road diesel locomotives before then. Most North American locomotives built since have followed this basic design. In 1940, the Rock Island Railroad approached ALCO about building a locomotive for both road and switching service.

The first thirteen production locomotives were requisitioned by the US Army, the five railroads affected had to wait while replacements were manufactured. The requisitioned RS-1s were remanufactured by ALCO into six axle RSD-1s for use on the Trans-Iranian Railway to supply the Soviet Union during World War Two.

The ALCO RS-3 is a 1,600 hp, B-B road switcher diesel-electric locomotive. It was manufactured by American Locomotive Company (ALCO) and Montreal Locomotive Works (MLW) from May 1950 to August 1956, and 1,418 were produced — 1,265 for American railroads, 98 for Canadian railroads, 48 for Brazilian and 7 for Mexican railroads. It has a single, 12 cylinder, model 244 engine. 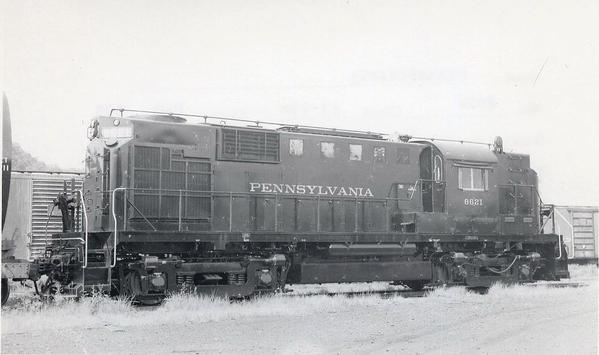 The ALCO RS-11 is a diesel-electric locomotive of the road switcher type rated at 1,800 hp, that rode on two-axle trucks, having a B-B wheel arrangement. This model was built by both Alco (355 units) and Montreal Locomotive Works (76 units). Total production was 431 units.

The first three RS-11s were produced by ALCO in February 1956 as a demonstrator set. This locomotive, classified by ALCO as model DL-701, was their first high-horsepower road switcher, intended to be a replacement for the very popular RS-3 road switcher. Featuring a V-12, 1,800 hp 251B diesel engine, the RS-11 was ALCO's answer to EMD's very successful GP9. The turbocharged RS-11 accelerated faster, had a higher tractive effort rating and typically used less fuel than the competition. It was also quite versatile and could be found in heavy haul freight as well as passenger service. It was produced in high-nose and low-nose versions. Montreal Locomotive Works also built nearly identical units, known as the RS-18, predominantly for the Canadian market.

While the RS-11 benefited from the increased power and reliability offered with ALCO's new 251B engine, and was arguably a more advanced product than the GP9, its market acceptance was disappointing against the reputation EMD's locomotives had made for superior reliability. 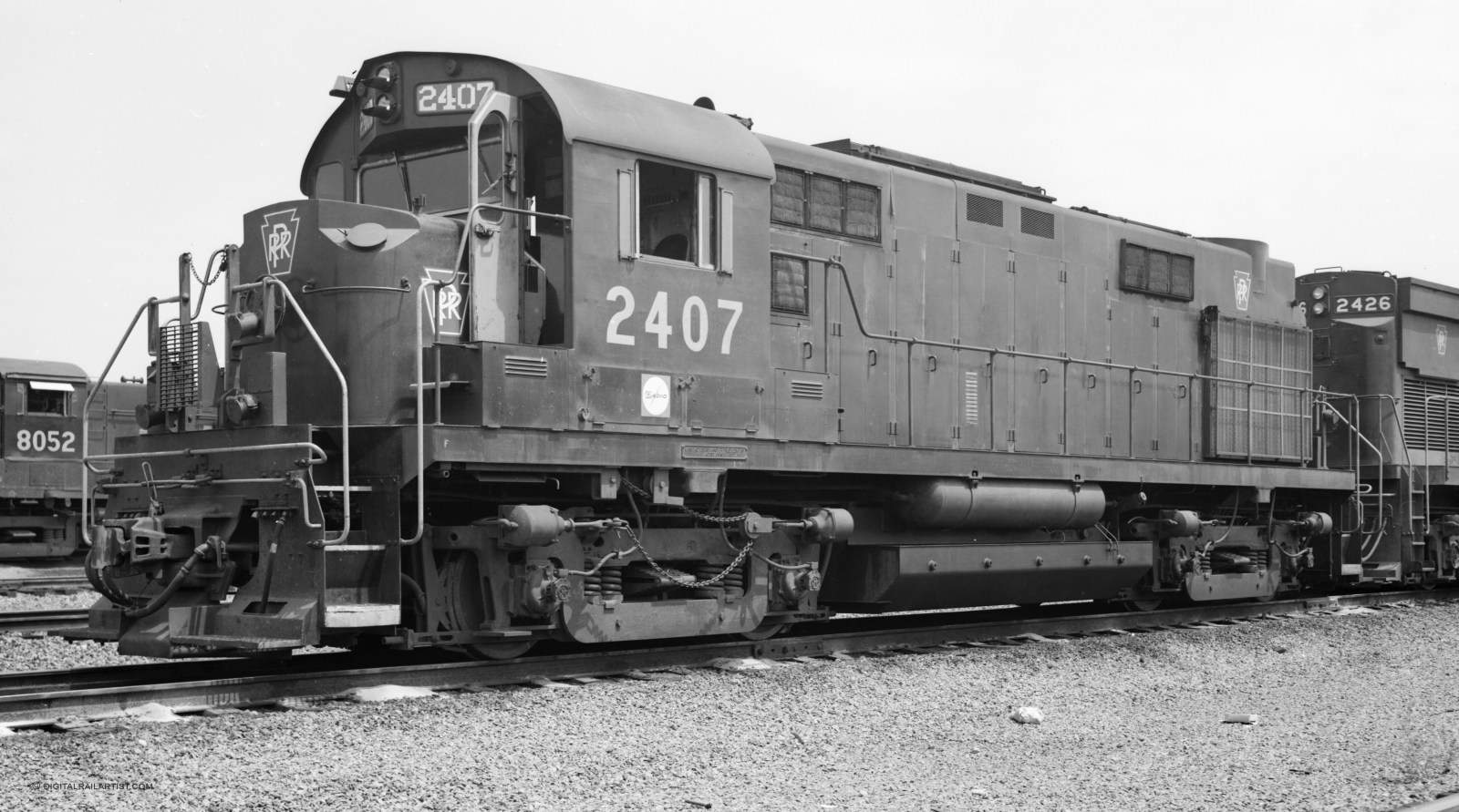 The ALCO RS-27 (specification DL-640) is a road switcher diesel-electric locomotive built by ALCO between December 1959 and October 1962. Only 27 examples were manufactured. With ALCO's introduction of the Century Series line, the C-424 (specification DL-640A) replaced the RS-27 in the builder's catalog. 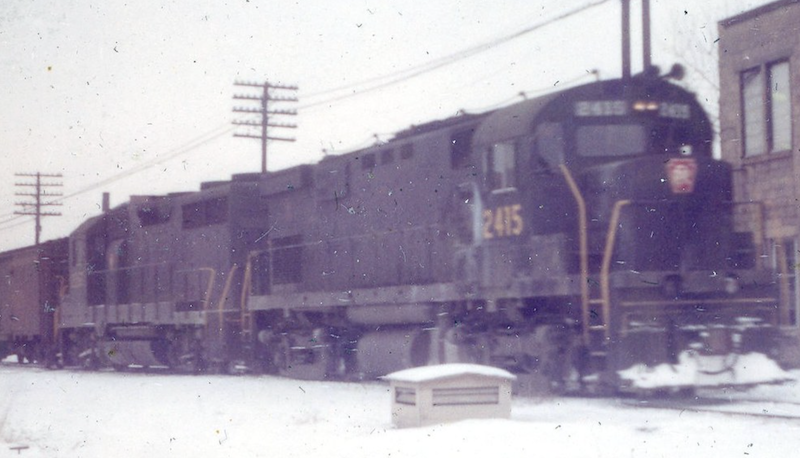 The Century 424 was a four-axle, 2,400 hp diesel-electric locomotive of the road switcher type. 190 were built between April 1963 and May 1967. Cataloged as a part of Alco's Century line of locomotives, the C424 was intended to replace the earlier RS-27 model and offered as a lower-priced alternative to the C425. Montreal Locomotive Works also built this locomotive as MLW Century 424. 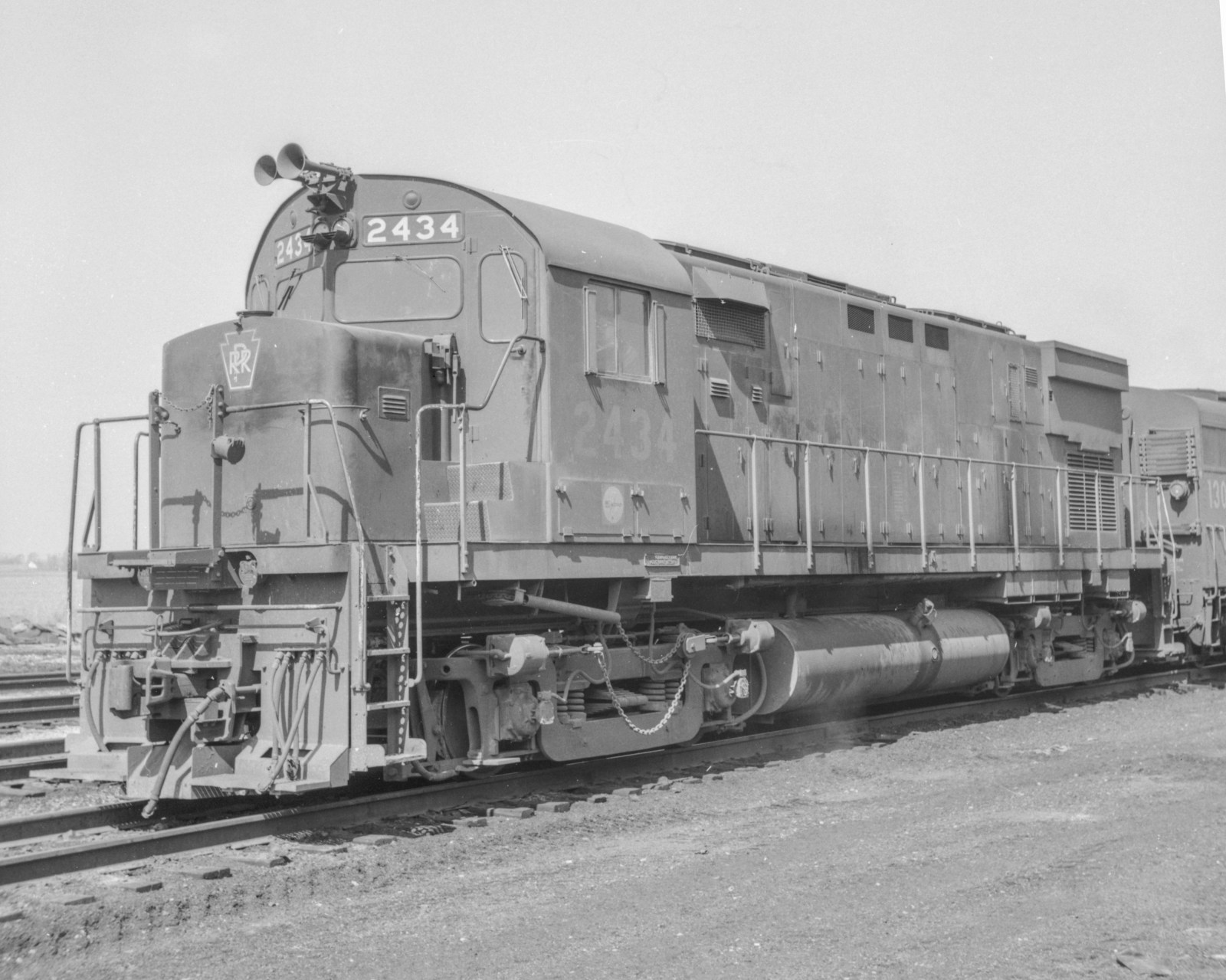 Cataloged as part of ALCO's "Century" line of locomotives, the C425 was an upgraded version of the C424. The C425 employed the same main generator found in General Electric's U25B model.

The ALCO RSD-5 was a diesel-electric locomotive of the road switcher type rated at 1,600 horsepower, that rode on a pair of three-axle trucks, having a C-C wheel arrangement.

Basically an upgraded version of the earlier ALCO RSD-4, and used in much the same manner as its four-axle counterpart, the ALCO RS-3, the six-motor design allowed better tractive effort at lower speeds.

The ALCO RSD-7 was a diesel-electric locomotive of the road switcher type built by ALCO at Schenectady, New York between January 1954 and April 1956. Two versions were built, with the same RSD-7 model designation but different specifications and power ratings, although both used the ALCO 244 engine in V16 configuration. Specification DL-600, of which only two were built, developed 2,250 hp and used the 244G engine. The revised specification DL-600A, numbering 27 locomotives, was rated at 2,400 hp and used the 244H engine. The RSD-7 was superseded by the ALCO 251-engined ALCO RSD-15, which looks very similar. The RSD-7 was the last ALCO diesel built with a 244 engine.

Both rode on a pair of three-axle trucks with all three axles on each truck powered; this is a C-C wheel arrangement. These trucks have an unequal axle spacing due to traction motor positioning; the outer two axles on each truck are closer together than the inner two. The RSD-7 used the GE 752 traction motor. The six-motor design allowed better tractive effort at lower speeds.

Alco designed the RSD-7 to compete with the Fairbanks-Morse Train Master (H24-66).

The two RSD-7 demonstrators were significant for Alco. They were built with the intention of challenging the Fairbanks-Morse Train Master H24-66. When built in early 1954 the RSD-7 delivered the highest continuous tractive effort of all diesel locomotives then available. The RSD-7 offered 75% more dynamic braking capacity than any standard freight unit available at the time. The superlatives of the RSD-7 allowed two units to do the work of three conventional 4-motor units. The dynamic brake system was mounted on top the long hood, leaving room in the short hood for a steam generator. The RSD-7 was the first Alco built with the notched corner sand fills. The RSD-7 was the first Alco to use the coiled air brake intercoolers mounted just above and ahead of the radiator intakes. The RSD-7 was the first Alco to use the then new Model 710 water cooled turbocharger in a 16-cylinder engine. The two demonstrators were numbered DL600 and DL601. The DL600 weighed 360,000 pounds at the standard 60,000 pounds per axle. The DL601 weighed 390,000 to test the gains in adhesion from the extra weight. Additional experimentation by Alco used new fuel injection pumps and nozzles, increased fuel rack settings, and an aftercooler was applied to reduce engine air inlet temperature. The aftercooler allowed higher density inlet air into the engine that promoted greater fuel burning efficiency. The aftercooler became the feature that allowed the 244 to be pushed to 2400 horsepower and the designation of 244H. The 244H is also known as the Alco 250 engine to disassociate it from the troubled 244 engine series. The maroon, yellow and gray painted RSD-7 demonstrators began a 23-railroad, 50,000 mile demonstration tour in the Spring of 1954. The tour concluded in September 1954 and the two units were refurbished before sale to the Santa Fe.

The ALCO RSD-12 was a diesel-electric locomotive of the road switcher type rated at 1,800 horsepower, that rode on three-axle trucks, having a C-C wheel arrangement.

171 locomotives were produced —Used in much the same manner as its four-axle counterpart, the ALCO RS-11, though the six-motor design allowed better tractive effort at lower speeds.

Six axle version of the RS-11, designed to compete with the EMD SD-9.

Predomonantly used as helpers between Altoona and Gallitzin.

The Alco RSD-15 was a diesel-electric locomotive of the road switcher type built by the American Locomotive Company of Schenectady, New York between August 1956 and June 1960, during which time 75 locomotives were produced. The RSD-15 was powered by an Alco 251 16-cylinder four-cycle V-type prime mover rated at 2,400 horsepower; it superseded the almost identical Alco 244-engined RSD-7, and was catalogued alongside the similar but smaller 1,800 hp RSD-12, powered by a 12-cylinder 251-model V-type diesel engine.

The locomotive rode on a pair of three-axle Trimount trucks with all axles powered by General Electric model 752 traction motors. These trucks have an asymmetrical axle spacing because of the positioning of the traction motors. The six-motor design allowed higher tractive effort at lower speeds than an otherwise similar four-motor design.

The RSD-15 could be ordered with either a high or low short hood; railfans dubbed the low short hood version "Alligators", due to their unusually long low noses. 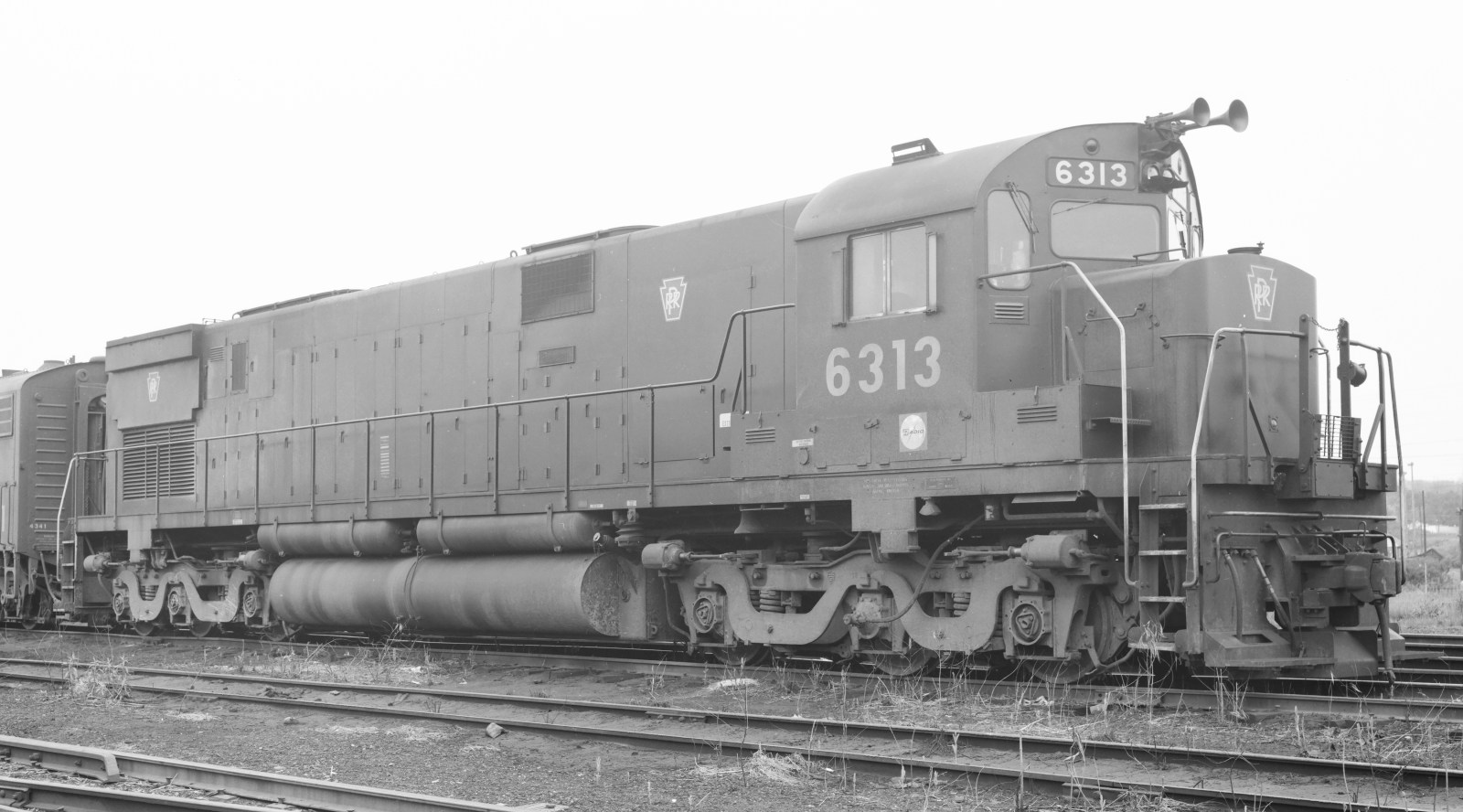 The Southern Pacific purchased the four demonstrators in 1964 and an additional 25 C628s were delivered in 1965.

The ALCO Century 630 was a six-axle, 3,000 hp diesel-electric locomotive built between 1965 and 1967. It used the ALCO 251 prime mover. 77 were built: 3 for Atlantic Coast Line Railroad, 4 for Chesapeake and Ohio Railway, 8 for Louisville and Nashville Railroad, 10 (with high noses) for Norfolk and Western Railway, 15 for Pennsylvania Railroad, 12 for the Reading Company, 15 for Southern Pacific Railroad and 10 for Union Pacific Railroad.

The ALCO Century 636 was the most powerful single-engine diesel-electric locomotive constructed by American Locomotive Company (ALCO). It used the ALCO 251 prime mover. The locomotive had a C-C wheel arrangement and 3,600 horsepower. The locomotive rested on a pair of trucks of all-new design, known as the Hi-Ad, standing for 'high adhesion'. Visually, it is similar to the Century 630, but can be distinguished by the intercooler box. The C630 has two grilles here, one above the other. The C636 only has the upper grille.

The production of only 34 Alco C636s, built in 1967 and 1968, reflected Alco's dwindling locomotive market share. Despite many new and innovative features, the C636 could not hold its own. Three demonstrators were built costing Alco about $5.5 million. 636-2, the only former demonstrator operating, was a factor in dissuading potential customers from purchasing these locomotives. During an evaluation on the Santa Fe Railway, the same traction motor blower on 636-2 failed (which causes engine shutdown) and was replaced on three of four runs, and had other unsatisfactory results while being tested on the Southern Pacific Railroad.